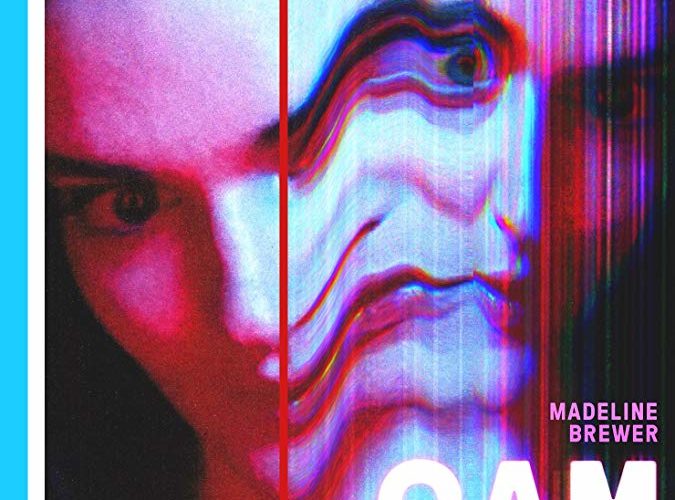 There’s a moment in director Daniel Goldhaber’s Cam where Alice (Madeline Brewer) is talking to her younger brother Jordan (Devin Druid) about the previous evening’s performance on web-cam site Free Live Girls. She moved past sex gimmicks towards the dark world of snuff film aesthetics and it worked to move her up more leaderboard spots in one session than she ever had before. He gives her a congratulatory fist-bump and asks whether she’s told their mother (Melora Walters’ Lynne) what her new lucrative job actually is yet. Alice says “No” because she’s waiting to crack the top-ten in order to prove it isn’t a lark — that she’s actually good at it. She says it in earnest, simultaneously admitting the stigma surrounding porn without delegitimizing it as a profession. It seems like such a small thing, but that single exchange sets the stage for how the audience reacts. Screenwriter Isa Mazzei is a former sex worker herself and knows the intricacies involved in what Alice (screen-name Lola_Lola) deals with publically and privately. She doesn’t write in porn as a means to infuse nudity into this thriller nor simply because it allows for the eventual case of stolen identity. It’s there like any other online job with an added bonus of possessing prejudices for us to project. This truth lets Mazzei play with our expectations and use characters easily assumed to have nefariously ulterior motives as red herrings amplifying the effective suspense. It lets us empathize with Alice once those meant to protect only supply disdain.

Here Alice is on the cusp of making her mark and her password stops working. Being locked out of her account is one thing, though. Visiting her profile to see someone else broadcasting is another. What’s even weirder is that she is that person. And it’s not a recording either — there’s an imposter breaking her rules (no fake orgasms, no saying “I love you,” etc.), taking her money, and earning her a reputation well beyond the limits of her carefully measured façade. Could it be a rival like PrincessX (Samantha Robinson), a rabid fan like Tinker (Patch Darragh), or someone worse? Is her life in danger? As more and more details surrounding what’s happening spill over onto others in her web-cam community, the horror mounts. Alice starts entering situations for which there may be no escape in order to find the answers she seeks. And as the fake Lola amplifies her reach well beyond the private room of electronic tippers she cultivated, those who know her in real life begin to discover her online self as well. It provides a sticky situation wherein she must defend the job while also explaining how the person they’ve seen isn’t actually her. Mazzei expertly creates this sense of contrasting arguments through the mystery she’s crafted, letting its terror metaphorically represent the struggle sex workers combat psychologically thanks to America’s prudish nature forcing them to lead dual lives.

Cam presents all the hazards involved in the job too whether the desire to lose yourself to the allure of greater success by going beyond your limits or having your identity stolen to the point where you become the fake. Mazzei and Goldhaber include stalkers, judgmental friends and family, and sugar daddies with authentic entrances and exits moving beyond their roles as plot devices. It’s the little details that do this like Michael Dempsey’s Barney proving confident and cool in a private chat before someone off-screen (presumably his wife) interrupts the session. He could have just been another potential villain with the means and motive to harm Alice, but the filmmakers let him show how viewers of porn also contend with their own form of duality. And they all surround this single profile of seemingly impossible content. Alice calls support and the police only to discover no one cares. But having her profile stolen goes beyond the performance itself since she leveraged her license and other information to acquire it. All that’s now in the possession of an imposter either as blackmail, extortion, or worse. Things get to where her friends simply want to know how she’s doing it, applauding her for every crazy new gimmick by asking permission to do something similar. After having all those fans and peers in her corner one day, Alice becomes stranded on an island alone while they unwittingly gravitate towards this copy. Eventually it becomes so unexplainable that we must wonder if we’re dealing with split personalities.

That’s where I must tip my hat to Mazzei and Goldhaber (who share equal billing at the top of the film rather than bow to directorial precedent for the “A film by” credit). We really are kept in the dark throughout. There are so many possible suspects (Alice included) that guessing becomes is futile. And as things move deeper into horror with a science fiction bent, we discover who and what are inconsequential. This film is about Alice salvaging her identity in the face of destruction. It’s about the pitfalls of an occupation vilified by a world embarrassed with its own cravings. Brewer plays it beautifully too, her tenacity and self-pride never wavering. Rather than be frightened away, Alice is emboldened to reclaim her agency and finish what she started.

Cam is played at the Fantasia International Film Festival and hits Netflix on November 16.