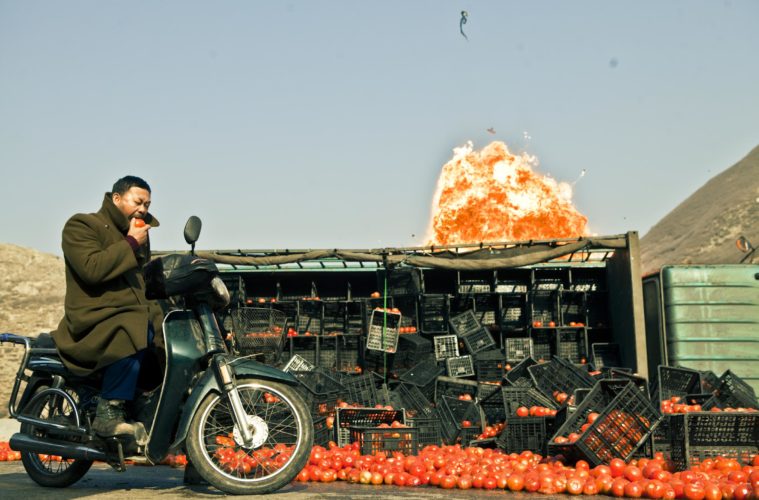 Closing out our year-end coverage is individual top ten lists from a variety of The Film Stage contributors, leading up to a cumulative best-of rundown. Make sure to follow all of our coverage here and see Ethan Vestby’s favorite films of the year below.

In terms of cinema, 2013 was a year where I found myself far more interested in exploring the past than the present — noirs, westerns, and comedies of Hollywood’s golden age being my particular preference. Yet aside from the variety of repertory screenings attended this year, the “current cinema,” so to speak, held its own advantage through a still-thriving theatrical experience, whether it be the local multiplex or number of film festivals. I’m proud to say I had an opportunity to see all these (aside from one) on the big screen, and it’s possible this lent an advantage over some other wonderful titles that just narrowly missed the list.

It should be noted that, as of the time of writing, I have not seen The Wolf of Wall Street, The Wind Rises, Her, Viola, This is Martin Bonner, or any of Ulrich Seidl’s Paradise trilogy.

10. To the Wonder (Terrence Malick)

While hyperbolically heralded by its star as making “The Tree of Life look like Transformers,” Terrence Malick’s latest feature instead shocked some by simply being the first of his films to be entirely contemporary. Aside from just St. Vincent’s “Now, Now” inexplicably (but pleasantly) popping in during the still-classical music heavy score, the jolt comes in seeing a Walgreens or high school marching band treated with the Malick touch. (“Everything is beautiful here,” indeed.) Yet it’s not long to last, revealing itself as only one half of a poverty-stricken small town as well as the backdrop for more romantic and spiritual quandaries. It seems there’s an abundance of questions repeatedly asked but never answered, but as evidenced by the suddenly prolific Malick, they’re at least in sight.

Does Johnnie To just make it look too damn easy? The Hong Kong director has the makings of what you’d assume were a studio workman rather than auteur, being that he directs an average of usually two films per year that seemingly only range from crime thriller to comedy — yet look closer, and you’ll realize that he’s actually what we’d associate with many of the great directors of ’30s and ’40s Hollywood. While current Hollywood seems to find its own middle-class evaporating — the practically made, no-nonsense potboiler one of these casualties — one might wish to look to the east with To. Though censored by making the film in mainland China instead of his usual Hong Kong, Drug War’s savage fatalism strikes a complimentary note to what initially appears as authoritarian moralizing.

The first two entries of the Before series offered the comfort of watching two people escape through each other; trading words of their anxieties, lost loves and general uncertainties of adulthood, making those both young and old nod their heads in some kind of agreement. Yet, with the third, that’s undeniably altered, as Céline and Jesse have now (spoiler alert) been together for nine years; their relationship now a circular movement of the same arguments and erotic tricks that, essentially, are what cynically leads to marriage being seen as just routine. Yet while its ending, considered a cop-out by many, leaves the film on maybe too happy a note, remember that more yelling and storming-out are inevitable to happen again. Simply, enjoy it while it lasts.

It’d be nice to discuss Lav Diaz’s latest without mentioning its runtime; four hours and ten minutes, which while reasonably short by his standards, will still likely scare off even a number of adventurous cinephiles. Yet the passage of time comes inevitable in actually engaging with it, as it’s intentionally most felt in the film’s strongest passage, in which its narrative strands stop at their seeming rigorous narrative and thematic development to simply depict life occurring at its own pace. Of course, considering the apocalypse it ultimately reaches, in which good and evil; a wrongfully torn-apart peasant family for the former, an existentially corrupted law student the latter, don’t see just ends, it comes easier to understand the film’s ultimate virtue; it’s lack of obsession with racing to its own ideological conclusions.

In interviews for his comeback film, Passion, Brian De Palma stated his disdain for shooting on digital, its lack of ability to properly light beautiful women standing as the chief reason. The irony, of course, is that laptop screens and surveillance cameras were seemingly present at every point of the film, often capturing his leading ladies in bizarre, unflattering compositions that render them as concrete objects of the mise-en-scène. This is perhaps why adjectives that are all essentially variations on each other have been constantly thrown Passion’s way: “ridiculous,” “campy,” or, even more likely, “laughable” — though, to me, the right one might just be “brazen.” This isn’t just patting Mr. De Palma’s ever-present self-awareness on the back, but rather pointing out that, behind the smirk, there lies a genuine questioning of images themselves.

“Escapism” becomes a label used to separate the sectors of art and entertainment, essentially that the former is often used to hold a mirror to the world, while the latter, the possessor of this term, is a tool of diversion from our troubling lives. Yet to take that word to a more literal degree, Closed Curtain sees Jafar Panahi, still imprisoned by the Iranian government, break down the very walls of storytelling to envision his own freedom, both from the confines of his own home to the very need to create a narrative of it. Whereas the “meta” film often entails at least a good dose of snark (just look at the previous film on this list), Closed Curtain only envisions it as the means most necessary.

Due to the constant influence May ’68 has on his work, Philippe Garrel’s films often concern a fruitless pursuit of something lost — and, with Jealousy, maybe the simplest human concept: happiness, is the object of this typically talky trek. Amidst the festival circuit’s plentiful offerings of bloat, whether through glibly provocative subject matter or tired recycling of arthouse aesthetics, the relaxed 77 minutes comes as not only a relief, but a reminder of the power found in simple expressiveness. The best way to say it is that Jealousy feels like a story told only through the very images it requires, the multiple perspectives drawing from Garrel’s own life as a father, lover, and child all made wholly clear.

Like many other a film noir, Bastards is often helplessly convoluted — just amongst the examples being a dream sequence presented without even the distinguishable marks of a break in reality. Yet that doesn’t even really seem to matter, as Claire Denis is, inevitably, far more interested in the act of seduction than explanation, whether through the sight of headlights at night, animalistic love-making, the way she can cast any actor perfectly based on their physicality, or a throbbing electronic score courtesy of Tindersticks. These preoccupations notwithstanding, the overall eroticism reaches disturbing (to say the least) ends that virtually no other director would show, even when captured through a lower resolution — the final cruelty being the insinuation it makes about a catchy Hot Chocolate cover it’s set to.

Jia Zhangke’s films often depict an easy overlap between politics and pop culture, whether it be the entertainers of Platform or The World, or the seeming overabundance of accessibility in Unknown Pleasures. This certainly holds true for A Touch of Sin, which — while loosely based on four real stories of violence fuelled by capitalism in contemporary China — plays with the tropes of past popular cinema as many characters come to embody modern Wuxia knights, the brandishing of Zhao Tao’s knife easily recalling the heightened sword strokes of King Hu. But as a public opera of one these classic Wuxia stories directly poses at the end, “Do you understand your sin?” As easy as it may sometimes prove to cheer on these acts of violence, every one comes with their own set of repercussions.

Presumably Tsai Ming-liang‘s final feature, Stray Dogs appropriately sees slow-cinema, an art film “movement” of which he’s considered one of the defining members, at its most extreme. With shots lasting around ten minutes in length — and, more often than not, displaying acts ranging from mundane to outright inactive; in particular, an extended “climax” that’s simply two people looking at a mural — the film could easily be described as “difficult.” Yet while it becomes an even trickier narrative piece by the final third, venturing into the obtuse (or as my interpretation sees it, the afterlife), the film’s emotions are always crystal clear. Tsai’s form doesn’t adhere to the tenets of stylized realism with some distancing anthropology, but displays an intimacy of character, setting, and, above all, time. No wonder we come to look at two still figures as a living, breathing version of the very mural they’re turned to tears by.