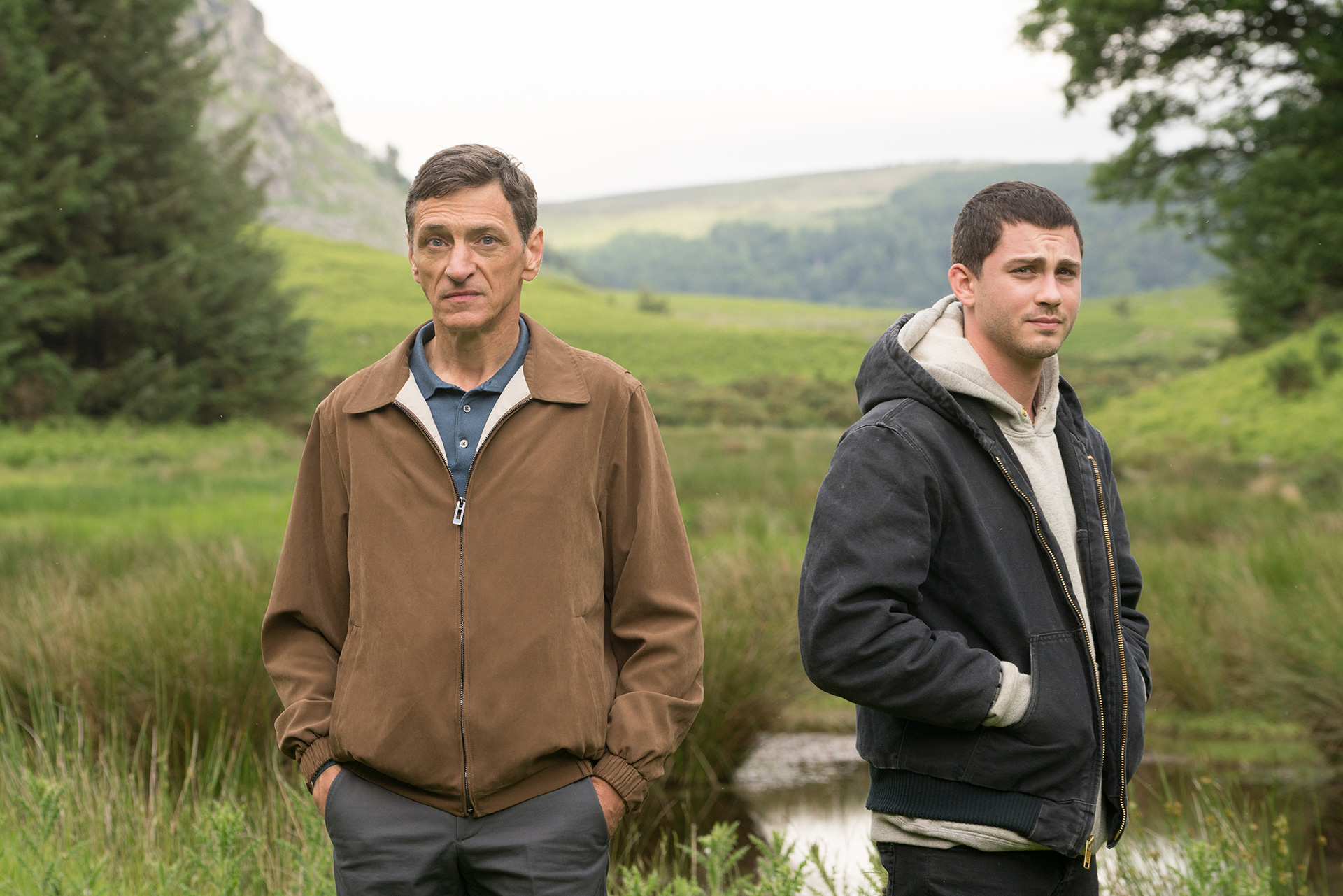 To look at Frank (John Hawkes) and Sean Fogle (Logan Lerman) is to see two very different men. The former is a loving husband with a perpetual smile and the latter is his surly, incarcerated son. If not for the woman connecting them, they’d have gone their separate ways long ago without any room for reconciliation. Nothing will therefore be left once the Fogle matriarch (Andrea Irvine’s Anna) succumbs to cancer. Frank will become a widower trying (and faltering) to survive on his own while Sean will be released from prison to head west and not look back. To spend some time with them, however, is to realize they’re actually quite similar. One retreats emotionally while the other lashes out, but anger and shame rules both.

Writer Michael Armbruster and director Elfar Adalsteins concoct a “last wish” road trip in order for us to spend this time getting to know them. The title End of Sentence is thus as much about where we start—Sean leaving jail to find his father waiting outside—as it is where we finish. This is because another unspoken crime had been committed many years prior. The ramifications of that incident drove the wedge that’s kept father and son at arm’s length since and ultimately prove the main reason why Frank’s proposal to travel to Ireland and fulfill Anna’s request that both spread her ashes in return for never having to see him again is instantly refused. Sean wants a clean break now, but he doesn’t have a choice.

He relents because the most efficient path to California (where this felon is promised a most elusive prize: full-time employment) is somehow through Europe. Sean has no money and can’t be trusted, so Frank’s offer of a plane ticket to any destination of his choosing upon completing Mom’s wish is as much his best option as it is his only option. So off they go with son’s incessantly snide comments and dad’s unyielding patience to let the words slide off his back. It’s a comically unstable dynamic that epitomizes who they are and how they cope. Sean pushes things too far in pursuit of fights while Frank deflects too easily to ever avoid exploitation. Or does Sean project his pain onto others while Frank simply enjoys helping them?

The answer is obviously a mixture of the two, but explaining why would be a disservice to the script’s effective ability to hide hard truths in plain sight until the emotional potency of their revelation is highest. So we watch the Fogles’ frustrations and mistrust in action as they awkwardly derail touching moments and cause extra strife when it appeared the ceiling had already been reached. And then there’s a celebration with friends and family who missed Anna’s American funeral carrying a potential bombshell that causes Frank to wonder if Sean was right about him being a pushover just as a new acquaintance in Jewel (Sarah Bolger) opens Sean’s eyes to the realization that the wall he built between them is as much his doing as his father’s.

So while the result’s humor entertains thanks to Lerman and Hawkes’ odd couple pairing, the drama bubbling beneath the surface drives things forward. We discover exactly what has to happen to rattle Frank’s nearly-Teflon cage and witness as Sean’s volatility can sometimes manifest as courage in ways that highlight how his true nature is much closer to his dad’s than outsiders might guess. They catch glimpses of each other that their self-imposed sentence apart prevented and begin to acknowledge that they were never the real enemy. It’s difficult to come to that realization, though, when the pain exacerbates to the point of blindness from everything else. Suddenly they’re dismissing each other as their worst traits while neglecting to understand the underlying causes as their communal silence grows deafening.

End of Sentence is therefore composed of tiny moments slowly chipping away at a decade or more of disappointment. And because Lerman and Hawkes are so good, Adalsteins can let their resentment and fear exist unspoken. One act will prove to Sean that he might never be seen as anything but inferior while another reminds Frank that the hope for forgiveness is futile. They must earn the other’s respect by showing they can care about anything beyond the image of strength they hide behind. Sean’s nonchalance masks his penchant to run away while Frank’s unaffected demeanor is merely pretend. That they haven’t confronted it to this point is evidence of their selfishness yet also forgivable considering what they’ve endured. Only through Anna’s love will they finally wake up.

Some of what happens narratively can be written off as convenient in hindsight (Sean’s crime of choice inevitably becomes a skill needed to get their mission back on track), but I don’t see how anyone would think it in the moment. These characters are too complex and performed with too much nuance to not be fully invested in their desperation towards a common goal. Sean will learn every betrayal doesn’t demand retribution and Frank will come to terms with the fact that doing the right thing isn’t always enough. There’s invariably more to every story—crucial details providing vastly different meanings if incomplete. You can neither live life without the capacity for forgiveness nor fear the act of asking for it. Nobody will listen if you don’t speak.

End of Sentence hits VOD/Digital HD on Friday, May 29.