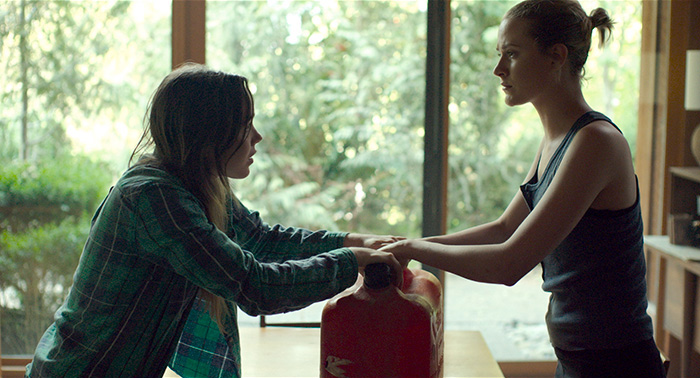 Premiering at the Toronto International Film Festival last year, Patricia Rozema‘s Into the Forest follows Ellen Page and Evan Rachel Wood as two sisters who struggle to survive in a remote country house after a continent-wide power outage. Picked up by A24 following the premiere, the adaptation of the Jean Hegland novel will now arrive this summer and the first trailer has landed today.

We said in our review from TIFF, “Half inspiring narrative of mankind’s perseverance, watching these girls teach themselves about nature and how to stay alive while severed from civilization is just that. The experience is tense, since we know this can’t be everything the story holds for us. They cannot live free from the violence and aggression we know simmers outside their forest surroundings with order thrown out the window. It’s not like no one knows where they are or that their home wouldn’t be seen as a target for supplies by passing drifters. Visitors are inevitable and while some remain pure at heart, others don’t. The film isn’t some last stand at the Alamo, though. It’s even worse because there isn’t a war or enemies to blame—just one person against another.”

Check out the trailer and poster below for the film also starring Max Minghella, Callum Keith Rennie, Michael Eklund, and Wendy Crewson.

Set in the near future, this riveting and suspenseful apocalyptic drama follows two sisters, Nell (Ellen Page) and Eva (Evan Rachel Wood) who live in the Pacific Northwest with their kindly father, Robert. Nell is focused on her studies and Eva is training to be a dancer, but their peaceful lives are disrupted one day by what turns out to be a continent-wide blackout. Whereas at first the family bond together and try to make the most of their difficult circumstances, as time gone on, the challenges become more serious. In the wake of a shocking and violent confrontation that Robert has with a menacing passerby, the sisters must work together in order to survive in their increasingly treacherous new world.

Into the Forest hits DirecTV on June 23 and opens in theaters on July 29.