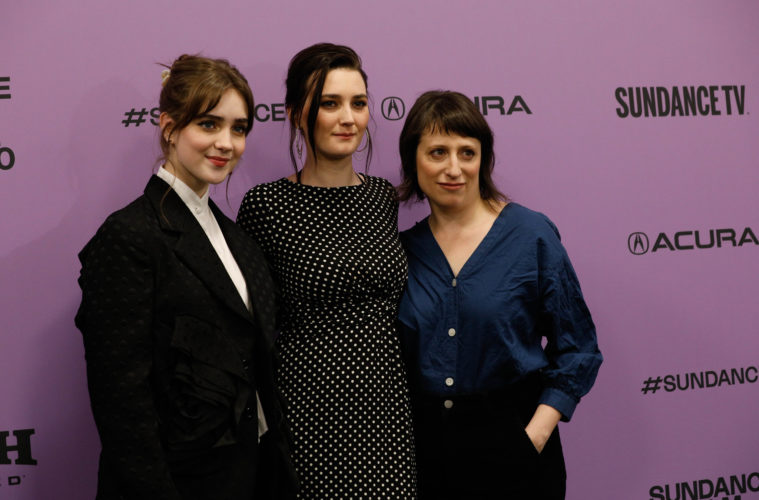 In just three films, writer-director Eliza Hittman has crafted some of the most vivid, intimate coming-of-age dramas of the century thus far. Following 2013’s It Felt Like Love and 2017’s Beach Rats, she returns with Never Rarely Sometimes Always. Starring Sidney Flanigan and Talia Ryder, marking both of their debut roles in film, it’s a deeply moving chronicle of a teenager’s struggle to terminate her pregnancy.

In my review from the Sundance premiere, I sad it’s her “most powerful film, culminating in a sensitive, stirring experience free from heavy-handed sensationalism. As the moral, ethical, and legal debate of abortion continues amongst higher powers, Hittman as provided an essential, specific look at just one person’s struggle to have control over her own body. By doing so with such a delicate, considered perspective, she’s giving a voice to millions of women going through the same experience. And it’s time to listen.”

While at Park City, I spoke with Hittman about the subjectivity and empathy of the film, reteaming with Hélène Louvart, pulling off the incredible long take in the film, and what action people can take who want to help the women going through this experience.

The Film Stage: By not making this story overly political, anyone is simply able to empathize with the main character. I’m wondering about that process and decision, and if you think this approach can subtly bring more eyes to the issue you are discussing?

Eliza Hittman: I don’t know if it was a conscious decision to not make the movie overtly political. I really just approached it how I approached my other two films. It’s about a character in crisis. It’s different in the sense that I’m usually exploring very self-destructive characters and this character is trying to find her way out of her crisis. I was really interested in creating an obstacle-based narrative about the bureaucracy and barriers of what she encounters. How embarrassing it must be to ask her boss for time off work to get an abortion. I think those little moments that are sort of unspoken that women encounter everywhere. I hope the subtlety of those moments resonate, and politics is embedded underneath.

It’s not just about her journey to get an abortion. It’s also about the sexual commodification of the other women, such as the grocery store manager and the subway scene. Can you talk about embedding those themes?

I think it’s a reality for women, that there is this tension in the environment that we encounter from an early age and there are micro moments and macro moments and it’s a part of daily life. My intention was to show how unpleasant and how much it sucks to have to deal with at every moment.

Speaking to that, Théodore Pellerin plays an interesting character because he has some ulterior motivations but still has this nice exterior. What were you trying to say with his character?

I think all my male characters kind of walk a fine line. I didn’t want him to be romantic. I wanted him to be a nice guy with relentless intentions.

In your last two films you explore the outer edges of New York City but in this one, you go into Manhattan, and it’s not the Manhattan that we see in other movies. Can you talk about bringing that to life?

I think people and films really romanticize New York. I have relatives who are not from New York who never want to come to New York and there’s a reason. It’s not such a romantic place for people. It’s hard to navigate. There’s an unpleasantness to it. That was apt the story I was telling. It wasn’t a film about being touristic and being on vacation. I was never planning a shot where they look up and down at the skyscrapers. It wasn’t about showing how vertical and beautiful the city was. It was about grilling the real point A to point B with some invention in between where I wanted the characters to explore, like Chinatown.

I wanted to talk about the cinematography. Hélène Louvart is amazing. Every moment you capture the textures of not just the women but their environment. Can you talk about what it looks like on set to construct that narrow perspective?

Helene and I sit and do a week of table work where she is trying to get inside my head. I talk through all the shot ideas I have, all the things I want to experiment with when I do camera tests. What lenses we should be on, this and that. What is so phenomenal about Helene is her intuition and her deep connection to the story. In this film particularly, she was such a performer on set, sort of checking every movement and intuiting what they were going to do. You never feel like it’s trying to be a documentary.

I wanted to ask about my favorite scene in the film where the title is revealed. It looks like one long take–

It is one long take. Sidney, our young actress, nailed it in one long take. We went into it knowing we were going to do it on film and in one take. For me, when you shoot digitally, and you shoot long takes it’s kind of meaningless because there is no risk–you can always delete it. When you shoot on film there’s a real risk to it and for that scene we knew we were gonna shoot two cameras, so there is one in front and one three-quarters on her. I think we had time for that one play and then the other began. It was just Helene in the room with the sound person. The room was as big as the booth in this restaurant. I wanted to create a sense of intimidation with the cameras on Sidney to achieve the feeling in the scene Sidney had a lot of natural emotional access, and was very available emotionally throughout the shoot and made a real gift of herself.

You’re in her perspective the entire film, even when she is having the abortion and she goes out. It’s not exploitative melodramatic, you just wake up and see her. By not giving the audience the expected but still giving her perspective, what do you think is the culminating effect?

I think all my movies explore many subjective and immersive points of view. With this film I did a lot of research but I am not making a documentary. I’m telling a subjective experience. It’s really about how she would experience that moment then what medically what would be happening in that exact moment.

As we see in the film, even if Planned Parenthood offers help, sometimes there’s a sense of shame in asking for it. Through your research, did you realize any other ways people can people in these situations?

There is an organization called the Haven Coalition, and it’s a network of women who volunteer, offering a couch, a meal, and escort back to the clinic for women who are spending the night in New York. I felt that because the script had been structured to take place over three nights, I didn’t want to misrepresent them by not including that. Because they do offer, but I think there is a pride and a vulnerability in that moment that not all women would accept help.

Following its Sundance premiere, the film will be opening this March. How do you hope the movie will be received?