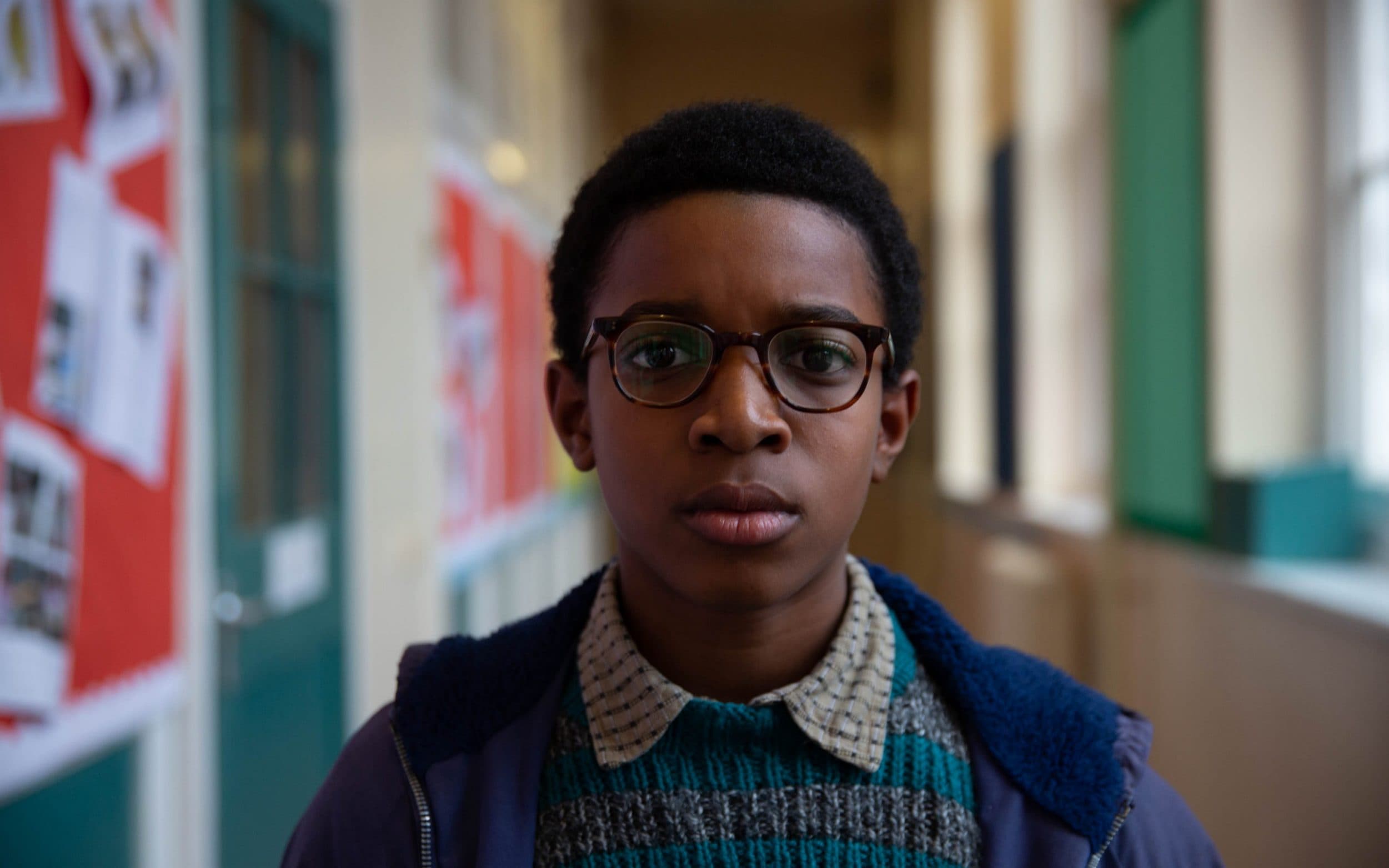 In Education, the fifth and final film in Steve McQueen’s Small Axe anthology, Kenyah Sandy’s young, bespectacled face commands the frame. His character, Kingsley Smith, experiences plenty of adolescent strife at the hands of a negligent education system that shunts him off to a “special” school for the “educationally sub-normal” (ESN) based on poor results from a culturally biased IQ test. He wears a vulnerable, frightened expression whenever he’s powerless to combat cruel, indifferent authority figures or mistaken for lazy when he just needs guidance. McQueen and photographer Shabier Kirchner focus on Sandy’s face partly because he represents an entire generation of Black British children who were in danger of being left behind by colonialist institutions. If it weren’t for a group of crusading West Indian women who actively sought out these children and their parents, they would have been doomed to a fate of perpetuating a cycle of poverty and ignorance. Sandy’s countenance embodies all of those who were swept up by the worst of history but ultimately saved by individuals who found a way to rewrite it.

In order to cleanly communicate the reality of this social intervention, McQueen and co-writer Alastair Siddons render Education far and away the most linear and straightforward entry in Small Axe. They mostly limit the film to two perspectives: Kingsley, who struggles to have his voice heard in school and his own home, and his mother Agnes (Sharlene Whyte), an overworked nurse who slowly realizes the urgency of her son’s educational needs. Education initially follows Kingsley as he awkwardly transitions to his new school, which looks like a prison and operates like a railway station before entering a life of menial labor. When it shifts to Agnes, however, the film takes a more didactic turn, especially after she meets activists like Lydia (Josette Simon) and Hazel (Naomi Ackie), who infiltrate ESN schools to intervene on behalf of the children without anyone’s permission. She’s forced to confront her own naïveté regarding the failures of Britain’s public schools as well as Kingsley’s illiteracy, a secret shame that threatens to worsen if not immediately addressed. Education ends positively, as Kingston becomes one of the lucky few who were saved by people from his own culture eager to see him thrive.

Yet, the simplicity of McQueen and Siddons’ screenplay is a feature, not a bug. More than any other film in Small Axe, Education resembles a kitchen sink drama in the vein of films from Mike Leigh or Ken Loach, where the political messaging remains crystal clear but is still filtered through personal narratives. It’s not like Small Axe’s previous entries shy away from overt politics, or that the series lacks an activist bent, but Education has an explicitly polemical feel that separates it from the bunch. It’s as if McQueen uses this historical footnote to try to wake up parents or guardians as to how various systems fail our children, especially those from marginalized groups. In many ways, he designs the film to serve a similar function that Bernard Coard’s pamphlet “How the West Indian Child is made Educationally Sub-normal in the British School System” did for Black British parents in the early ’70s. It’s only when Agnes reads the pamphlet and attends a community group meeting that she starts taking the issue seriously and tries to advocate on behalf of her child.

Similarly, Education’s emotional potency functions in simple, effective ways. Kenyah Sandy’s performance might as well be means tested to break hearts, especially when it becomes clear how far Kingston goes to hide his illiteracy and the sheer weight of his embarrassment when his limitations come to light. McQueen emphasizes the tenuous tenderness to the Smith family unit, how the parents clearly care about their children’s wellbeing, even if their affection is circumscribed by the grueling nature of their professional responsibilities. Kingston’s sister, Stephanie (Tamara Lawrance), is the first to recognize her brother’s trouble in school. She insists Kingston is bright when their father, Esmond (Daniel Francis), attempts to push him into carpentry, partly out of shame for passing on his own illiteracy to his son. Meanwhile, Whyte does fantastic posture and face work during Agnes’ awakening, balancing her own shame with the need to promote her child’s welfare. McQueen and Siddons don’t need to reach too far for the story to be affecting. It lies in the painful reality of their characters’ situation.

Education begins and ends with a portrait of our vast universe. Kingsley’s great ambition, aside from playing for Tottenham, is to become an astronaut like Neil Armstrong. It’s not exactly a subtle touch that the child at the center of Education has a dream to literally reach for the stars, but it’s mollified by the sheer breadth of oppression that McQueen has depicted over the course of multiple films. While Small Axe works as a series of standalone films, it’s worth pointing out that Education benefits from being viewed last. It’s only after you’ve witnessed such courage and pain and joy that a community has experienced just by trying to live free that one boy’s wish to travel the galaxies hits home.

Education is now on Amazon Prime.