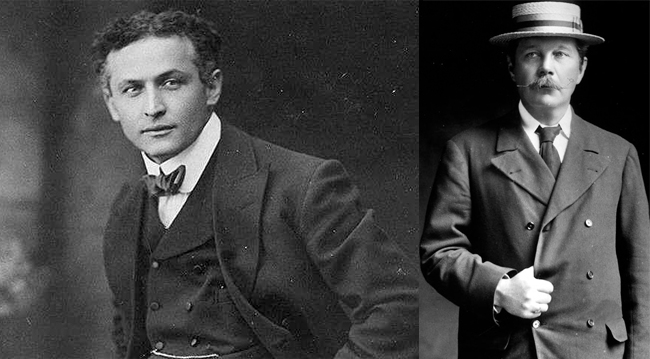 You ever dream about what it would be like to see Harry Houdini and Sir Arthur Conan Doyle team up and solve murders in the roaring 20’s? Well movie fans, that dream that probably none of you have had is about to become reality; Heat Vision reports that Dreamworks has bought Voices From the Dead, written by J. Michael Straczynski (the scribe behind 2008’s Changeling and the classic sci-fi TV show Babylon 5). The script is a period piece that follows Houdini and Doyle as they team up with a psychic in order to solve a string of murders that have gone down in New York City in the 1920’s.

What is interesting about this is the fact that Straczynski didn’t just pick two names out of a hat and pair them together; this idea is in fact routed in truth…sort-of. Houdini and Doyle weren’t crime solvers or anything, but they did forge a friendship in the 1920’s, clashing many times about the validity of the supernatural (Doyle believed in it, Houdini spent his career debunking it in his act). I’m sure these arguments/discussions will find their way into the movie, either in a serious way or in a “funny quip” kind of way.

There is no other announcements concerning Voices From the Dead other than the script sale, but I hope Dreamworks does make it into a movie. It’s an interesting premise to be sure, and I’m a sucker for anything that takes place in the 20’s; even more so when it involves Houdini making fun of Doyle for believing in ghosts. Oh those two, what an odd couple of hilarity!

Who is ready for some period piece crime solving done by two of the more famous 20th century figures?