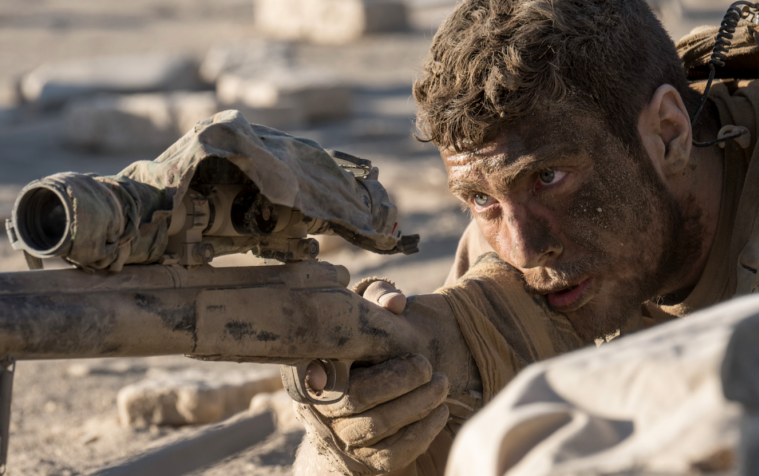 Though Doug Liman has built much of his blockbuster filmography on memorable action set-pieces, from The Bourne Identity all the way through Edge of Tomorrow, his earlier work (Swingers, Go) speaks to a more efficient, character-driven filmmaker. His new picture The Wall feels like a little bit of both. We got a chance to chat with the director about the film, the intricate design of the titular wall and how he deals with his short attention span while making movies.

You’ve worked on a decent amount of action thrillers. What jumped out to you when you read this script?

The reason why I’m drawn to making action movies is because I love pinning characters down in impossible situations and then seeing how they survive. And, you know, I’ve created some pretty outrageous situations; spies with amnesia or aliens and time travel in Live Die Repeat: Edge of Tomorrow. So The Wall had that in such an elegant way. Two soldiers pinned down by an Iraqi sniper, where the sniper is a thousand meters away. Because bullets travel faster than the speed of sound. You’ll be dead for three seconds before you hear the sound of the gunfire.

And I’m also interested, throughout my career, in alternative versions of superheroes. You know, Jason Bourne is a version of a superhero and in Fair Game Joe Wilson and Valerie Plame standing up to the most powerful men in the world in the White House are superheroes of sorts. And, obviously, in Edge of Tomorrow Tom Cruise actually has a superpower.

But I looked at the characters in The Wall and what it was going to take for them to survive. You know, Aaron Taylor-Johnson is a form of superhero. He’s almost like Iron Man, he’s got all of those pouches with all of those supplies and he knows how to use them all and he keeps lifting himself up and he keeps going. These American soldiers who are in combat are like one-man fighting machines. It’s like Robocop.

The level of technology that you go into the field with and the level of training they go into the field with makes them a form of a superhero. And so The Wall had the elements I love in a big, Hollywood film, of a superhero facing impossible odds. But it’s real. Even more real than The Bourne Identity and The Bourne Identity I tried to make as real as I could.

When you’re working in one location, you’re still creating these visually-interesting, visually captivating situations. How do you keep the look fresh when you’re in one spot? Does that limit you?

Well, it’s a huge challenge to work with one location. But, on the other hand, it allows you to dig in deeper and do something that’s ultimately more compelling and it’s a box that’s even more difficult for the hero to escape than if you keep changing locations. Probably for me the biggest difficulty is that I have a very short attention span. Part of how I dealt with my short attention span in the past is lots of different locations, lots of different characters, quick cutting. You know, with The Wall how could I make a film that, given my short attention span, not use some of my crutches that I’ve used in the past.

Speaking of the titular wall, I love the design of the thing. The minute [Aaron Taylor-Johnson] jumps behind it, we get to know exactly what it is. How he’s playing Tetris in making holes for visibility while it’s barely still standing up. How does that intricate design come to be?

I mean honestly? It started with LEGOs on my desk. I wish I could point to a more sophisticated approach. And then Jeff Mann, who designed Mr. and Mrs. Smith for me, was the designer for the movie and we wanted to give the wall personality and character. We also had to design a wall that was going to collapse in different ways but we only could afford one wall. And we couldn’t have it collapse on Aaron Taylor-Johnson, you know?

It was way more of an engineering feat than it might appear to be. Given what a significant element it is in the movie, Jeff and I spent countless hours designing the detail of it. And I did want it to feel precarious as well. That it was the only thing keeping him alive and he can’t necessarily count on it standing for the whole movie.

And that definitely comes through. In terms to the narrative itself, there are these legends of these snipers in the Middle East that the military was aware of and their rumored kills. It’s interesting how you create this American military myth within this very real scenario. In telling this story, how do you construct that mythos of sorts with a very authentic context?

There was a version of the movie where we talk about the real [Iraqi sniper] Juba and his legend, which we decided not to do. Because it’s not really a movie about him. For us, the key was to connect with the soldiers. We were really fortunate how many veterans and soldiers and Gold-Star wives reached out to us and helped us and let us into their homes and into their photo albums and into their letters and into their lives so that we could understand what it means to be a soldier. And a soldier in combat. Give us a taste of what that feels like so we could bring it to the screen.

What have you got on the horizon? I know American Made in September. Anything else exciting?

The paint’s still wet on The Wall. [Laughs] I make films, sort of, that when I’m done with a movie I react and that affects the one I choose after it. In a way, I chose to make The Wall as a reaction to Edge of Tomorrow, where I was like, wow, I didn’t need to have aliens and time travel and this crazy, outrageous situation to pin the hero or superhero down in an impossible situation and watch him try to get out of it. So I think the simplicity of The Wall was a reaction to the over-complexity of Edge of Tomorrow. So I’m not quite sure what my reaction to The Wall will be. Too soon.