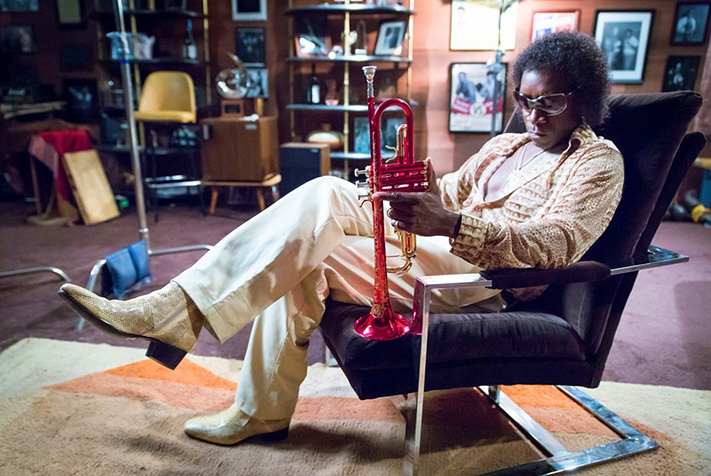 Some eyebrows were raised when the New York Film Festival decided to close out a stellar year with Miles Ahead, an unseen-by-almost-any Miles Davis biopic that marks the directorial debut of Don Cheadle. That confusion continued once people saw the movie: what was touted in the festival notes as “truly, one of the finest films ever made about the life of an artist” played to many, myself included, as a half-interesting, half-perfunctory telling that, if you’ll allow me, knew much of the music and little of the rhythm.

Given the generally lukewarm response, it’s of little surprise that Sony Pictures Classics won’t hold the picture over for next year’s awards consideration, instead slotting it for an April 1 release. (April 1… NYFF’s ringing endorsement… you create the joke.) The first preview is a decent indication of what’s coming, and so I believe it’s safe to say that, if you’re made at all curious by what’s here, Cheadle’s picture might have good things to offer — but I can’t be sure, either, since I was wavering between reactions as the whole thing played out.

MILES AHEAD is a wildly entertaining and moving exploration of one of 20th century music’s creative geniuses, Miles Davis, featuring a career defining performance by Oscar nominee Don Cheadle in the title role. Working from a script he co-wrote with Steven Baigelman, Cheadle’s bravura directorial debut is not a conventional bio-pic but rather a unique, no-holds barred portrait of a singular artist in crisis.

In the midst of a dazzling and prolific career at the forefront of modern jazz innovation, Miles Davis (Cheadle) virtually disappears from public view for a period of five years in the late 1970s. Alone and holed up in his home, he is beset by chronic pain from a deteriorating hip, his musical voice stifled and numbed by drugs and pain medications, his mind haunted by unsettling ghosts from the past.

A wily music reporter, Dave Braden (Ewan McGregor) forces his way into Davis’ house and, over the next couple of days, the two men unwittingly embark on a wild and sometimes harrowing adventure to recover a stolen tape of the musician’s latest compositions. Davis’ mercurial behavior is fueled by memories of his failed marriage to the talented and beautiful dancer Frances Taylor (Emayatzy Corinealdi). During their romance and subsequent marriage, Frances served as Davis’ muse. It was during this period that he released several of his signature recordings including the groundbreaking “Sketches of Spain” and “Someday My Prince Will Come.”

The idyll however, was short lived. The eight-year marriage was marked by infidelity and abuse, and Frances was forced to flee for her own safety as Miles’ mental and physical health deteriorated.

By the late ’70s, plagued by years of regret and loss, Davis flirts with annihilation until he once again finds salvation in his art.

With Ewan McGregor, Michael Stuhlbarg, Emayatzy Corinealdi, and Keith Stanfield co-starring, Miles Ahead will enter a limited release on April 1.