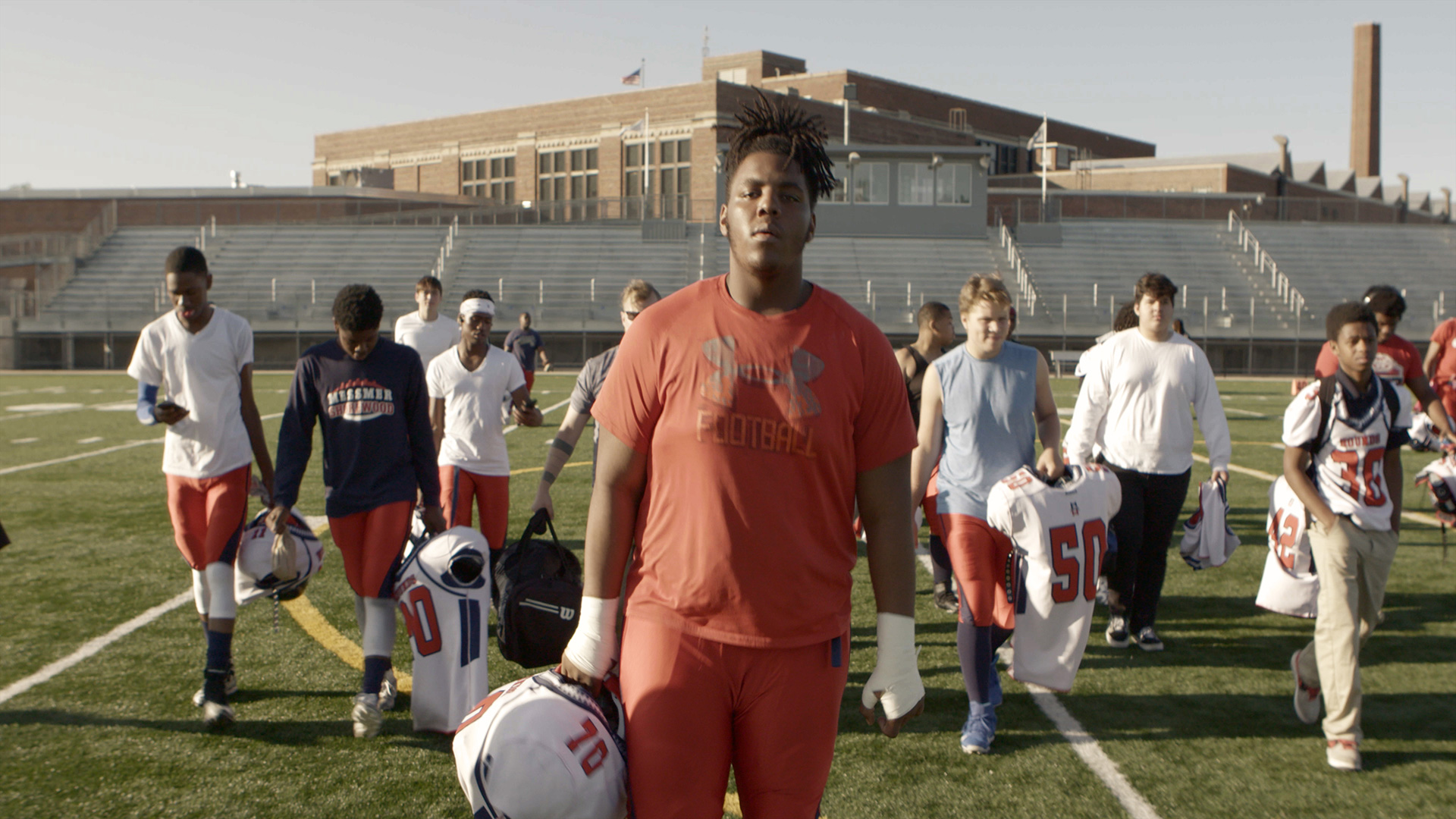 You can’t avoid questions of race when discussing a situation such as that at the center of Emily Kuester and Brad Lichtenstein’s documentary Messwood. The title is the name that was coined when two high schools, a mile apart on the same street separated by a stream, joined forces to field a competitive football team. Shorewood High is predominately white and bolstered by the highest median income level in Milwaukee. Messmer High is predominately Black and saddled with a student body that can barely graduate half its senior class each year amidst gun violence and poverty. While bridging the gap between these two worlds with sport superficially appears a legitimate answer to widespread racism, however, sometimes these dynamics merely prove a means to an end.

That’s not to say the Messwood experiment isn’t successful on a person-to-person basis. By looking at the unlikely friendship between Messmer senior Parius and Shorewood sophomore Max, you can recognize how easily barriers can be broken when introducing commonality that goes beyond socio-economic experiences. It’s a flawed example considering Max’s best friend (Amarion often lives at his house to cut down transportation costs) at Shorewood is also Black, but no less impactful insofar as exposing others in his neighborhood to that from which many surely believe their high taxes are meant to shield them. Because they won’t do it themselves. Whenever the filmmakers talk to the athletes’ parents, we hear how they’re apparently “accepting” in philosophy despite comfortable in keeping their unplanned segregation at the stadium whole.

While we hear Kuester and Lichtenstein’s voices asking questions to seek clarity at times, their film is more interested in slice-of-life drama than any politically motivated agenda. They’re happy when the topic of race is broached organically through words or actions without trying to steer things in that direction, and perhaps force their subjects into voicing stronger opinions than they might want. You can sense that many of the white interviewees are cognizant of the cameras and maintaining the liberal image they want to uphold while many the Black interviewees find themselves more willing to shoot straight. That’s America in a nutshell: the white population feigns “colorblindness” rather than acknowledge their privilege as the Black population proves their existence can’t afford that same silence.

It’s not surprising, then, that the film quickly pushes Shorewood to the background to focus solely on Messmer. Besides Max and Amarion in class, everything else is pretty much a depiction of football and its surrounding environments. That means glimpses at homecoming and team events with parents serving players meals, but also educational roadblocks. Since the latter is depicted as a Messmer problem—low graduation rates mean student athletes struggle to keep GPA at the level necessary to be eligible to play—Coach Davis and his team are forced to dedicate plenty time and resources to that school. And once you start going down that road, you inevitably uncover the reasons why: single-parent households, unengaged guardians, murdered and/or jailed relations, low income, etc.

I could be wrong, but I think Max is the only white kid who speaks directly to the camera. It works because he’s one of the few who hangs out with his Black teammates, but it also feels like a missed opportunity. Messwood is obviously a feelgood piece striving to champion the boys it spotlights, but I’d love to view an alternate cut with more pushback to Coach Davis’ philosophy of keeping race out of his teachings (until a quick fast-forward to COVID and BLM marches has him saying he does talk to players about it “when he needs to”). Give me more interviews with white players (beyond Max) about the game that had opponents using the “N-word” on the field to see how empathetic they really are.

Despite opening with a challenge to the utopian myth of Messwood, Kuester and Lichtenstein do sadly back off, whether on purpose or in the edit, and it’s a shame—that’s where intrigue lies. I loved the part when Fred’s mother laments how Shorewood students sometimes attend games and cheer for “Shorewood” rather than “Messwood,” despite the team containing a wide majority of Messmer students. I loved always seeing the tension and coldness between parents in the stands, contrasting how genial someone like Max’s mother is at home. They all admit they could do more to be closer to the other school’s parents, but none are ever seen trying. And that’s why race needs to be a point of discussion. Acknowledgement is necessary for change.

That’s a different film, though. For better or worse. This one is instead about perseverance and commitment. It’s about Coach Davis using tough love to teach these boys how to be men. He’s a man who demands respect and ultimately earns it in the way he reacts and adapts to every kid’s unique situation, when and if they reveal it to him. For some kids (like Parius), talking is easy. For others (like Amarion), it’s not. And while seeing Black people succeed can be an eye-opening experience for youth who only know struggle, that struggle can also generate a powerful mistrust in those who achieved it or dare to believe they can too. The film thankfully escapes the gridiron long enough to show these teens’ lives beyond it.

So while Messwood leaves a lot on the table, it does what it does well. It gets us into this unique situation to see how those from across the bridge interact with and engage with a world that’s light years away despite its proximity. Look no further than Parius getting invited to Max’s house only to have his mother say “grab whatever you need from the fridge.” The genuine look of shock when he sees the fully stocked shelves and his trepidation when contemplating if it’s a trick—before taking two drinks and involuntarily hiding them in his shirt—portrays that disparity perfectly. Coach Davis preaches “family” on the field, but it’s more complex than that. Shorewood literally exploiting these boys for their talent should also be addressed.

Messwood is playing as part of DOC NYC 2021.