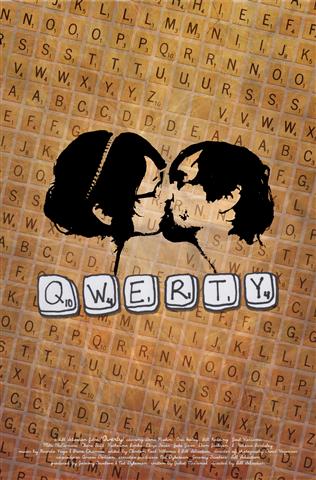 Directed by Bill Sebastian, Qwerty tells the story of Zoe (Dana Pupkin), a lonely “word nerd” who puts her peculiar talents to work for the Chicago DMV by checking every vanity plate request for a hidden dirty meaning (like, say, A55 5EX). She harbors a dream to compete in the National Scrabble Championship, but with constant rejection coming from both her family, who consider her a black sheep, to her co-workers, who consider her weird, she can’t seem to push herself to enter.

That is, until she meets Marty (Eric Hailey), a man who has all but lost the will to live. After a quirky meet cute (Marty gets fired from his job at a retail store for ranting about overpriced underwear), the two spend the day together and soon enough the two fall in love. In Marty, Zoe finds the strength to stand up to her family and pursue her Scrabble dreams and through Zoe, Marty begins to discover that maybe there’s still something to live for. Qwerty is not a movie that’s easy to sit through. Predicated around the romance between Zoe and Marty from the moment they meet each other, it doesn’t work; the two share absolutely no romantic chemistry, with Zoe coming off like a psychotically desperate woman (she gives him a nickname almost right away, behavior that would send a sane man running) and Marty as an uncaring suicidal lout. Yet they become a couple anyway because that’s how the film is written. And while there are scenes later on that do eventually try to make them more compatible (mostly Marty standing up for Zoe against various people who are mean to her), they feel more like they were tacked on once someone realized that the relationship that drives the movie had no fire or realism to it.

With the exception of Zoe, who comes off endearing despite some of her quirks (she makes sock monkeys out of stray socks for some reason), the characters are rarely likable or interesting. Marty is nearly insufferable as is his best friend Lewis (Bill Redding), a homeless man who camps outside of Zoe’s house and hears Jesus tell him things (all of which are not funny or add anything other than “here’s some more quirky stuff guys!”).

Zoe’s estranged family are ridiculously over the top in their disgust of her and are stock rich snob characters. Zoe’s Scrabble troupe don’t factor into the story much, and neither does the douchebag Scrabble player Dirk (Joel Wiersema) who is Zoe’s defacto (and supremely ineffectual and pointless) nemesis in the Scrabble world. It’s really just Zoe, Marty, and a bunch of other meaningless characters who didn’t even really need names.

Qwerty was a slog to get through, with the few highlights being the sufficient acting (Pupkin and Hailey come off well despite how they’re written, the former especially) and some spare funny/poignant moments. But it can’t overcome its unnecessarily quirky tone and the focus on a forced and hollow romance.