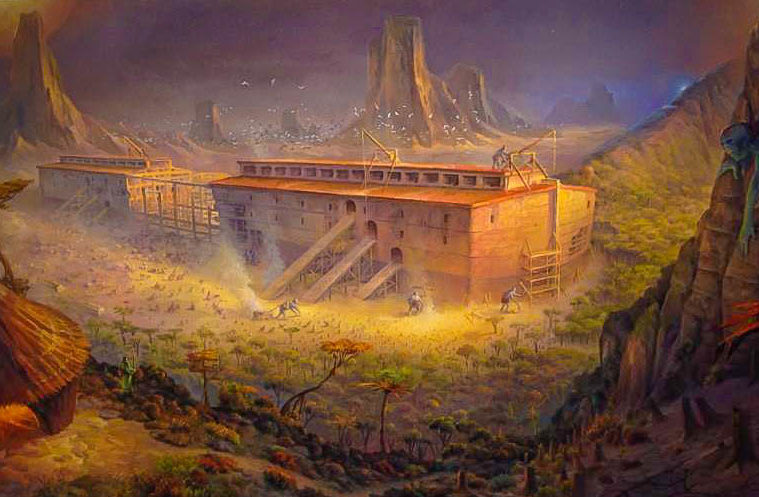 Before the great flood touches down at the end of the month, director Darren Aronofsky set to out to prepare for the release of Noah by presenting a gallery of artwork that uses the forthcoming film as a point of inspiration. Titled “Fountains of the Deep: Visions of Noah and the Flood,” we’ve previewed a selection of the pieces, but last night Paramount and the director officially unveiled the gallery, which opens at 462 West Broadway in New York City starting today and will run through Saturday, March 29, 2014, a day after the film opens.

Including work from Ugo Rondinone, Sue Williams, Karen Kilimnik, Mike Nelson Nan Goldin, Jim Lee, Jim Woodring, Simon Bisley, Faile, and the late Reverend Howard Finste, today we have another preview straight from the gallery. Featuring over fifty pieces, Aronofsky also showed off a few glimpses of new footage. On the lower floor of the exhibition, there are four periscope-esque lenses that one can view, each featuring a few seconds from the forthcoming film, with the majority showing something vastly different than what we’ve seen in the previews thus far.

The first displayed the meteor shower we see in the trailer, but then went further to reveal the giant, fallen angel known as the Nephilim crashing into the earth, emerging from the mud embroiled with fire. The second displayed a fight scene, featuring a large beast made up from rocks, with multiple arms. The creature was not far removed from The Lord of the Rings universe, but with ILM’s animation this is akin to the work they did on Transformers, as it stood tall above the humans, kicking and throwing them at will.

The third preview depicted the flood, but from an angle we previously haven’t seen; on the left side of the frame one could see a large rock formation emerged from the expanding ocean as a mountain of people were clinging on to take their last breaths. Lastly we got a glimpse of post-flood, as Noah and his surviving family were walking across a desolate landscape. While brief, these snippets reveal there’s much more in store that we haven’t seen from the biblical epic.

Back to the art gallery, I’ve included some stills I took last night right below, as well as a statement from Aronofsky; if one wants to see more, head over to FirstShowing, who also have included more photos from the gallery. There’s also a featurette below on how the ark was created, and its three levels can even be explored here. My favorite of the exhibition, by Thomas Thiemeyer:

By Mike and Doug Starn: See more about the art show on the official site. Noah hits theaters on March 28th.