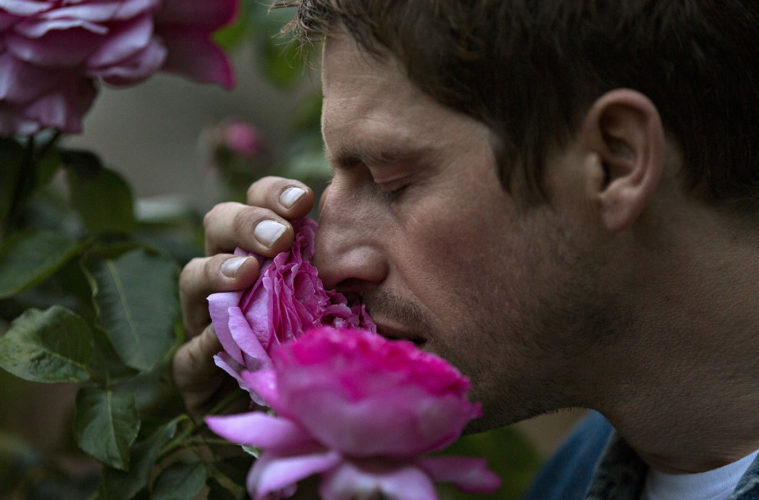 “I mostly read dead writers,” Arthur says. Jacques teases back, “You won’t need to wait long.” The many types of relationships, friendships, and the ways the two transform are explored in Christophe Honoré’s new film Sorry Angel. In this scene, the two lovers discourse as if they were student and teacher, weaving multiple aspects of their relationship: their age difference, common interests, and Jacques’ known status as H.I.V. positive into two lines of dialogue.

We spoke with filmmaker Honoré and one of his lead actors, Vincent Lacoste at the 56th New York Film Festival. Honoré discusses Sorry Angel’s aesthetic manifesto and the new wave of international homophobia that influenced him to tell this story now. Lacoste discusses his character Arthur’s relationship with Nadine (Adèle Wismes), his lover prior to Jacques (Pierre Deladonchamps) and the idea Honoré presents that Arthur, Jacques and Mathieu (Denis Podalydès) are the same character but at different stages of life.

The Film Stage: Many shades of the color blue show up in the film. Will you talk about your color palette?

Christophe Honoré: The blue is first and foremost the result of a financial constraint. The story takes place in the 1990s and it demanded a period look, but we were working with a relatively tight budget so I had to find ideas to deal with this. There was something in my memories about France in the 1990s. Streets in the cities were lit by mercury bulbs so they gave off blue light. Today lighting of cities in France is very different. We have sodium bulbs which have an orange light. My director of photography and I talked about how we could have blue light in the film. We decided to move the blue into the sets and costumes. I don’t mean to say this pretentiously, but we came up with this aesthetic manifesto, which was to make a summer film in winter.

Will you talk about Arthur’s relationship with Nadine?

Vincent Lacoste: He likes Nadine and it was a relationship he liked, but he is someone who is discovering his sexuality and he’s discovered it’s not his sexuality. No matter how much he might like her she’s not the present for him. It’s not right to say she’s a pastime for him now–it’s that the relationship is over. It’s something that’s transformed into a friendship.

And will you talk about Jacques’s relationship with Mathieu?

Honoré: Is the reason you’re asking such similar questions back to back that you think they’re similar or the same type of relationships?

Jacques and Mathieu’s friendly intimacy seems worn, like they used to be in a relationship, so yes.

Honoré: It’s certain that something that was very important to me in the film is that while the main story is a love and sex story between Jacques and Arthur, it was also very important there were satellite stories that are stories of friendship. So we have the friendship between Jacques and Mathieu, Arthur and Nadine, but also the friendship between Arthur and the mother of his child. Or Arthur and his fellow students. Friendship was an essential theme of this film.

At your New York Film Festival Q&A Christophe said that Jacques, Mathieu, and Arthur are almost like the same character but at different stages of their life. I would love to hear Vincent’s perspective on it.

Lacoste: It’s not something I thought about on the shoot. It wasn’t something I could play. It was more of the realm of what was unsaid on the shoot. Of course these three characters do have a lot in common but for me each character is different. I think it’s more of an idea Christophe has of the film rather than the reality of the film. From a concrete point of view, I don’t think Arthur will be like Mathieu one day.

You’ve been making movies for two decades. Why did you choose to tell the story now?

Honoré: In the 1990s I was a student. I am older now and there’s a temptation for filmmakers or writers who are approaching fifty to turn to the past and youth. I think this is a usual theme or habit of artists nearing fifty. It’s also true that cinema offers this possibility of achieving time regained, of returning to a certain time. Cinema can give us this illusion that the past returns. This is something I’d never done in my earlier films. In this case I felt the temptation to do it. It’s also true that in France, but Europe in a more general way, you see what’s going on in Poland, Russia and Chechnya, I have the impression there’s a very brutal expression of a new homophobia. I thought it was important as a gay filmmaker to propose this film today.

Sorry Angel opens on February 15 at NYC’s Quad Cinema and will expand in the coming weeks.