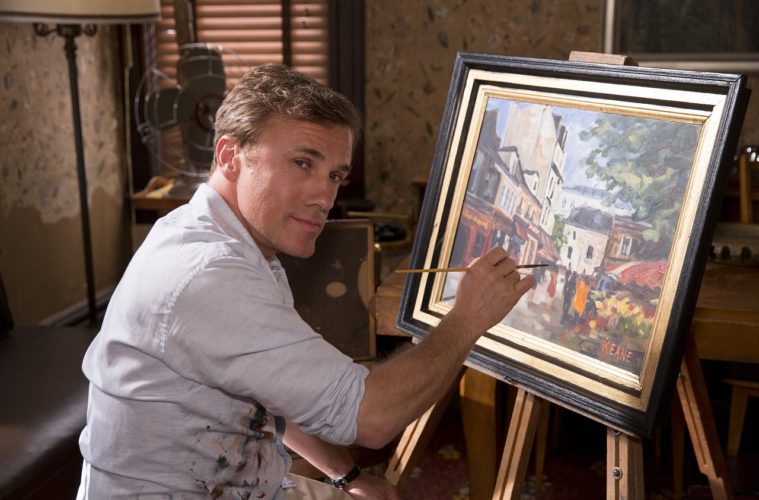 Big Eyes marks a return for Tim Burton to the stranger-than-fiction bio film. 20 years after Burton’s greatest work, Ed Wood, he’s teamed up once again with screenwriters Scott Alexander and Larry Karaszewski to tell Margaret Keane’s (Amy Adams) story. For around a decade back in the ’50s and 60s’, Margaret allowed her husband, Walter (Christoph Waltz), to take credit for her paintings. It’s a bizarre, funny and sad tale, and Burton’s most human and intimate picture in years.

Big Eyes features two wildly different performances from Waltz and Adams. While Margaret is introverted, Walter is a man with no filter and an unbelievable ego. Walter’s behavior in Big Eyes will have audiences questioning how true the film really is, but the screenwriters actually pulled back on some of the huckster’s wild antics. The failed artist may be somewhat of a cartoon, but Waltz helps make him human.

The very personable actor was kind enough to discuss the film with us recently at the film’s junket. In our 15-minute conversation with him, we discussed the kind of experience he hopes to have when he goes to a theater, the lack of immediate and emotional films, and the relevance of Big Eyes. Here’s what Big Eyes star Christoph Waltz had to say:

I saw the film at the Los Angeles Museum of Art premiere. That was a great crowd.

It really was. That was a wonderful evening and very encouraging.

It got a lot of laughs. I think what really works about the humor in the film is it never undercuts the drama of Margaret’s predicament — and that’s a tough balance.

Thank you very much. That’s well put. It’s mostly the director’s merit, really, to balance all these things that, as a sum total, it makes sense. You know, I’ve found that directors like to push themselves in front of the story lately and give their versions and visions, and that’s their main objective for the movie. I don’t really quite get why that’s the most important thing, because the story is still what we go to the movies for. We want to experience story. We want to feel the story, so we can make our own minds up.

Right. You often feel the hand of the filmmaker pushing you towards a certain idea or emotion.

Exactly. I want to be invited into the story. I want to be involved, not called upon as a critic. I want to be really thrown into the thick of it, and that’s what makes the experience of going to the movies so gratifying. You can like it or dislike it, but I don’t think our aesthetic sensitivities and knowledge should be the prime target, but story and emotional involvement.

Over the past few years you’ve been a part of movies that transport you in that way. Is it tough finding that kind of material?

Yes, in a way, it is, because there are trends, fashions, and culture goes this way and that way. I’m not saying other approaches are far worthless, but, for me, when I go to the movies, I’m happiest when I’m immersed in the story. There’s a lot of comment going around rather than the immediacy of an experience. A lot of fairly intelligent comment is going around — and I’m not saying they’re dumb or a waste of time — but I want to be immersed in story. Have read some past interviews you’ve done, you seem to have a very workmanlike approach to acting. You don’t get all academic about your roles, you do the work. Have you always been that way?

I always have been. I try to not to maintain that, but develop it. It’s more or less the same story from the other side. We all, as a result of various academic fashions, try to comment on the things we do rather than doing them, and I think that’s counterproductive.

You want the work to speak for itself.

Yeah, yeah. It’s all opinion by now. The actors’ opinion is irrelevant. Just do what you have to do. The audience’s opinion is what this is about. Well, maybe not even that, but the audience’s experience. We all try to be smart, but I don’t know…it’s meddling with perspectives. If you go to the movies and you’re never invited in, then you’re just there to have an opinion. There are too many opinions. [Laughs]

[Laughs] How important do you find an audience’s opinion? Do they determine whether a film or performance is a success?

Well, that’s one of the beautiful aspects of working in movies. You have to take the risk, follow your convictions, and hope for the best. Again, it’s more or less the same topic, because I don’t think we can preempt success, nor do I think we should. In the end, it all comes down to market research and survey — and all of that is based on an average — and it’s why a lot of stories are really not that interesting and engaging, because they tread very carefully not to step on anybody’s toes, not to disagree with anybody’s taste, and not to infringe upon anybody’s negative opinions. Again, here we are, it’s all about opinions, calculating and predicting. You know, that’s not storytelling. I tell you a story, and you tell me whether it speaks to you — and that’s how it works.

So many people worry about likability, and you’ll hear screenwriters say how often they get a note about how unlikable a character is. I imagine, as an actor, it’s tough finding juicy roles within the studio system because of that sanitization.

That is correct. Do we walk on the street liking everybody? Do we feel frustrated or diminished by the fact we don’t like everybody?

It’s subjective as well. There’s a great Dustin Hoffman quote about likability: show me the nicest person you know and someone has probably called them an asshole. [Laughs] Exactly. That’s what it’s all about. I understand, though, because there’s economical aspect to moviemaking. If you fork out several millions or hundreds of millions of dollars, you somehow fear that you might have lost your investment if you’re not extremely careful. All of this is very, very valid, but not for the actor.

It’s funny when you learn how toned down Walter was for the film, because he’s already such an unhinged character. When you were on set, would you give Mr. Burton various degrees of broadness, so he could play with the tone in editing?

A little bit. You can’t really plan these things, so, in the finest and final detail, you kind of have to venture out, and then [what comes next] is what makes for a good director. [Laughs] I know it’s still not even close to a tenth of what happened in reality, but within the believability and probability of the story as we tell it, there was, “Okay, [give] a little less, a little more.” Of course, that’s the fun in working with a great director.

Big Eyes is a surprisingly relevant film about the business of art and entertainment. When you look at Walter, he’s a salesman, and that alone, nowadays, can make someone famous. They may not have talent, but they can sell themselves.

You’re right, and it’s more or less the same thing, because the artist kind of gets pushed to the background and the business man takes over. It’s creating value out of something that might not have any. Market economy is eating up everything, anyway. There’s another relevance I find to the story beyond that, which is the relationship, and how, let’s say, market economy can infringe on a personal or intimate relationship, and warp or form or contort that relationship into something that doesn’t really have so much to do with the two people as such. The business takes over an intimate relationship.

You’ve worked with some great directors over the past few years, ones who really create their own — and uncompromised — worlds. Is that a part of the fun of the job, getting to step into these slightly different realities?

It is, it is. One of the best parts of the job is exactly what you’re describing. Where I’m a little easier than you are is that I don’t call what’s around us reality. I call it reality, of course, but not the only valid reality. A real artist will always create a reality, which is not any less or more real than what we experience when we cross 57th street [in New York]. Since I don’t believe in the superiority of any of those realities, anyway, it’s not that difficult for me to happily join a great artist.

I know what you mean. Sometimes the world may seem heightened, but it can still be real. Like, Dr. King Schultz’s death in Django Unchained, comes out of this very human motive of, “I can’t let someone like Calvin Candie win or keep going.”

Yes, yes. It’s interesting, because we’re going back to the beginning of our conversation, because this is really how you immerse yourself in a story, by joining the world that’s presented by someone else. I think that needs to be facilitated, not the overburdening of an opinion.