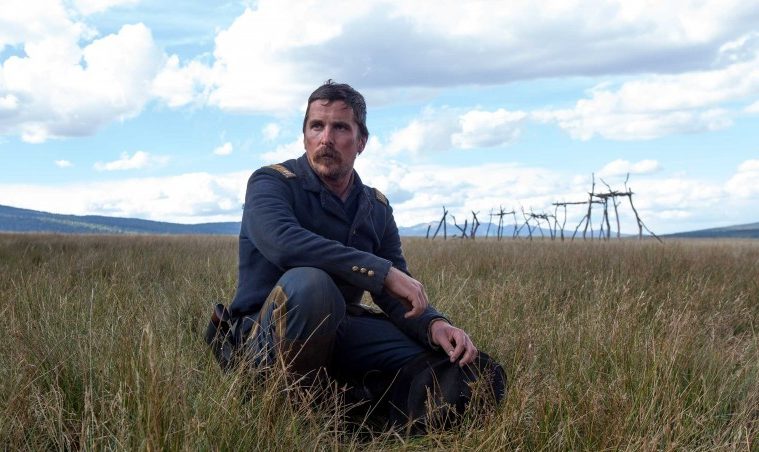 After breaking out with the Jeff Bridges-led Crazy Heart, Scott Cooper has struggled to find the same level of acclaim with his follow-ups Out of the Furnace and Black Mass, but now it looks like his next feature is much more tied to his slow-burn sensibilities. Hostiles, which premiered at Telluride to positive reactions, finds Cooper reteaming with Christian Bale, who stars a US Cavalry officer who escorts a Cheyenne war chief and his family back to their tribal lands in Montana.

Curiously still without a distributor, to help incur interest amongst buyers, Deadline has debuted the first trailer. With gorgeous cinematography from Masanobu Takayanagi (who worked on Cooper’s last two films as well as Spotlight and The Grey), hopefully a distributor comes on board in time to give a 2017 release. Also starring Rosamund Pike, Wes Studi, Adam Beach, Ben Foster, Jesse Plemons, Rory Cochrane, and Q’orianka Kilcher, see the trailer below.

Fresh from 2015’s gangster film Black Mass, Scott Cooper has turned to another venerable American genre, the western, for Hostiles, the raw and compelling tale of an embittered and battle-hardened US Cavalry officer ordered to accompany a Cheyenne war chief and his family back to their tribal lands in Montana. The flinty-eyed Captain Blocker (Christian Bale) has seen more than his fair share of violence and bloodletting on the frontier, but this mission, which he is forced to accept, is a particularly bitter pill to swallow: Chief Yellow Hawk (Wes Studi) has been his mortal enemy for years due to a conflict that killed many of Blocker’s friends. The Chief has also lost friends in the conflict.

Setting out through dangerous territory, much of it inhabited by hostile tribes, the small band of soldiers and Cheyenne navigate the beautiful prairies and wilds of the west, while facing a series of challenges. Blocker — much like John Wayne’s character in the John Ford classic The Searchers — is a racist, a man who harbours a deep hatred towards the former prisoners now placed in his care. As the challenges mount, Blocker is forced to confront his own bigotry while carrying out his orders. To complicate matters, the ragged party is joined by a stricken widow (Rosamund Pike) who has just seen her family massacred in a raid.

Hostiles cuts relentlessly into the complex, troubled relationship between those who have lived on this land for centuries and the white intruder, posing the question: is reconciliation possible?

Hostiles is seeking a U.S. distributor.