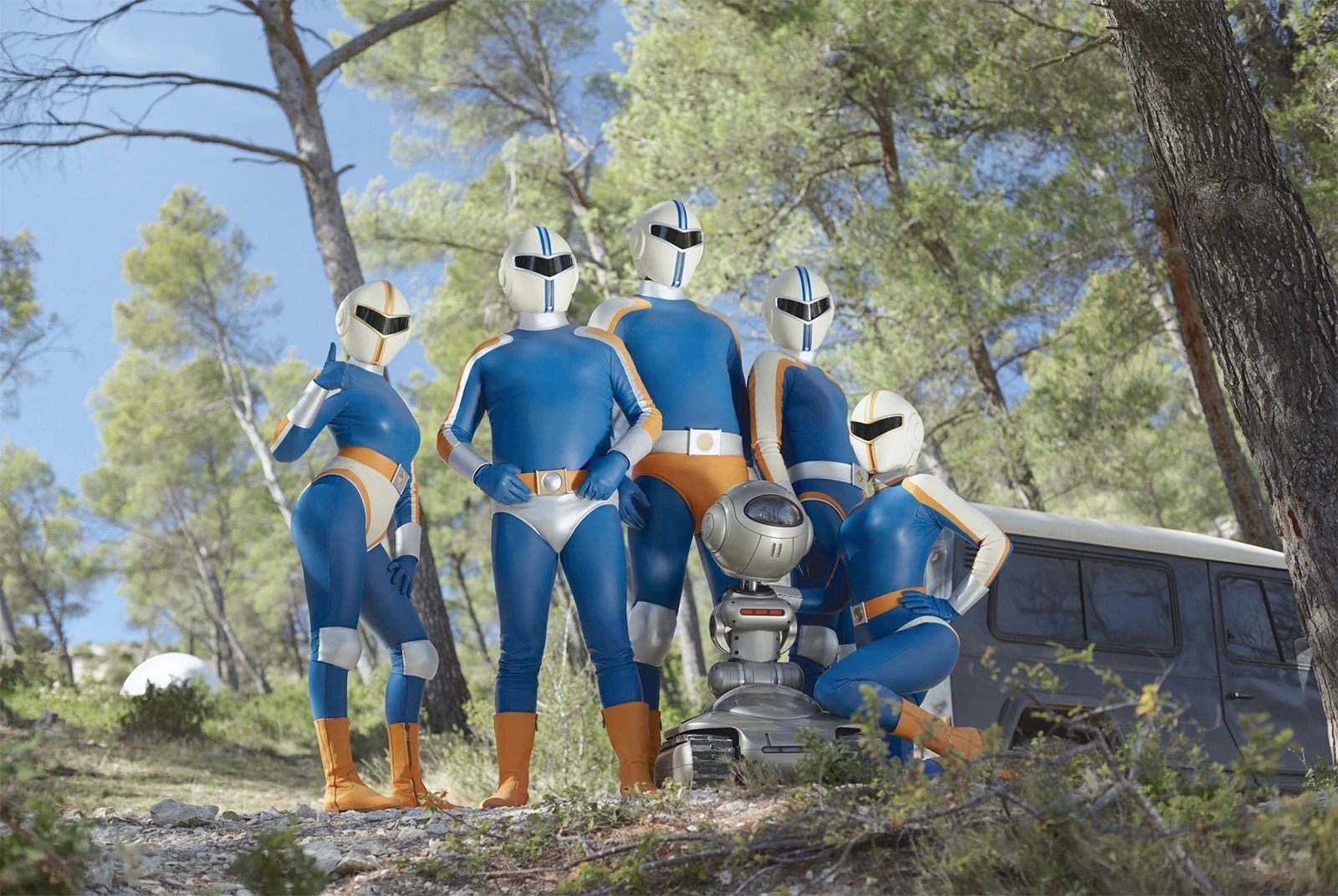 Teeming with all kinds of freaks and plots that toggle freely between the real and the absurd, Quentin Dupieux’s films are the work of an inveterate, shamelessly playful raconteur. With ten features now to his name, the musician-turned-filmmaker has amassed an oeuvre whose leitmotif isn’t (just) the director’s penchant for the gonzo, but his passion for storytelling itself. Stories and storytellers abound in his latest, Smoking Causes Coughing. A Russian doll of tales-within-tales, it features one of Dupieux’s most bizarre concoctions yet—which, for a man that gave us a sentient killer tire (Rubber), an oversized fly-turned-pet (Mandibles), and a leather jacket with homicidal powers (Deerskin), is to say plenty. That’d be the Tobacco Force, a group of five superheroes who roam the Earth slaughtering monsters with the power of the toxic substances they borrow their names from—but which, curiously, none of them has ever consumed. (Lest you forget, as a squad member warns a boy at the outset, “smoking is for losers!”)

Meet your unlikely avengers: Nicotine (Anaïs Demoustier), Ammonia (Oulaya Amamra), Mercury (Jean-Pascal Zadi), Benzene (Gilles Lellouche), and Methanol (Vincent Lacoste). Sporting azure spandex outfits and futuristic helmets (think of a cross between Daft Punk and the Power Rangers), they’ve just whacked a car-sized turtle when their boss Didier—a puppet rat slobbering bile as he speaks—phones to warn of a far greater threat. The almighty Lizardin wants to destroy our planet by the end of the year, and the Tobacco Force will only stand a chance if they fight together. As group chemistry deteriorates, Didier sends the quintet to a team retreat.

It’s here the narrative starts bifurcating. Camped by a lake in an anonymous stretch of southern France—a landscape shot by Dupieux himself in his traditional acid-washed palette, all sun-punched beiges and blues—Nicotine et al sit around a fire to tell each other stories, swelling Smoking into an anthology film. As with any such scaffolding, some work better than others. In the first—and, if notes don’t fail me, the longest—Benzene recalls the strange case of a summer holiday derailed by the discovery of a helmet that triggers homicidal urges on those who wear it.

There’s perhaps a metaphor for our post-lockdown solipsism hidden somewhere; as with anything by Dupieux, Smoking thankfully never slips into heavy-handed messaging. Gags are stretched to hallucinating extremes, but never quite outstay their welcome. As the first tale wraps and a second ends in the blink of an eye, we’re treated to a third the next day, this one recounted by a barracuda frying on a pan. In it, Blanche Gardin (Léa Seydoux’s secretary and the real scene-stealer in Bruno Dumont’s France) runs a sawmill whose operations come to a halt when her nephew gets stuck inside a machine that could reduce him to a puddle of blood and minced organs.

Chopped bodies, talking fish, thinking helmets: anyone mildly familiar with Dupieux’s oeuvre will know that searching for connections (or any degree of logic) is largely futile. As in his previous creations, nothing here suggests the director is after anything other than flexing his comedic muscles to conjure something weird and funny. A feat Smoking achieves, if only intermittently. For all the viciously captivating outbursts of gore and deranged laughter of the opening act and the sawmill debacle—the two strongest segments—there are times when the rhythm slows and the film loses some of its verve.

Yet there’s something oddly romantic about waiting for the Armageddon over campfire yarns. If Smoking may feel like an amalgam of leftover ideas, it finds a tenuous through line in the contagious love Dupieux imbues in the very act—and art—of bringing those fables to life. Nonsensical, incomplete, terrifying, and terrifyingly kitsch, Smoking’s many anecdotes hover above the Tobacco Force with a binding, near therapeutic power. To be clear, the film never makes that “stories will save us” point its cornerstone. But there’s a childlike pleasure in listening to Dupieux’s gang of eccentrics as they try to outperfom each other with tales that grow increasingly more outlandish, prompting the question you’d expect from the very best of them: what happened next?