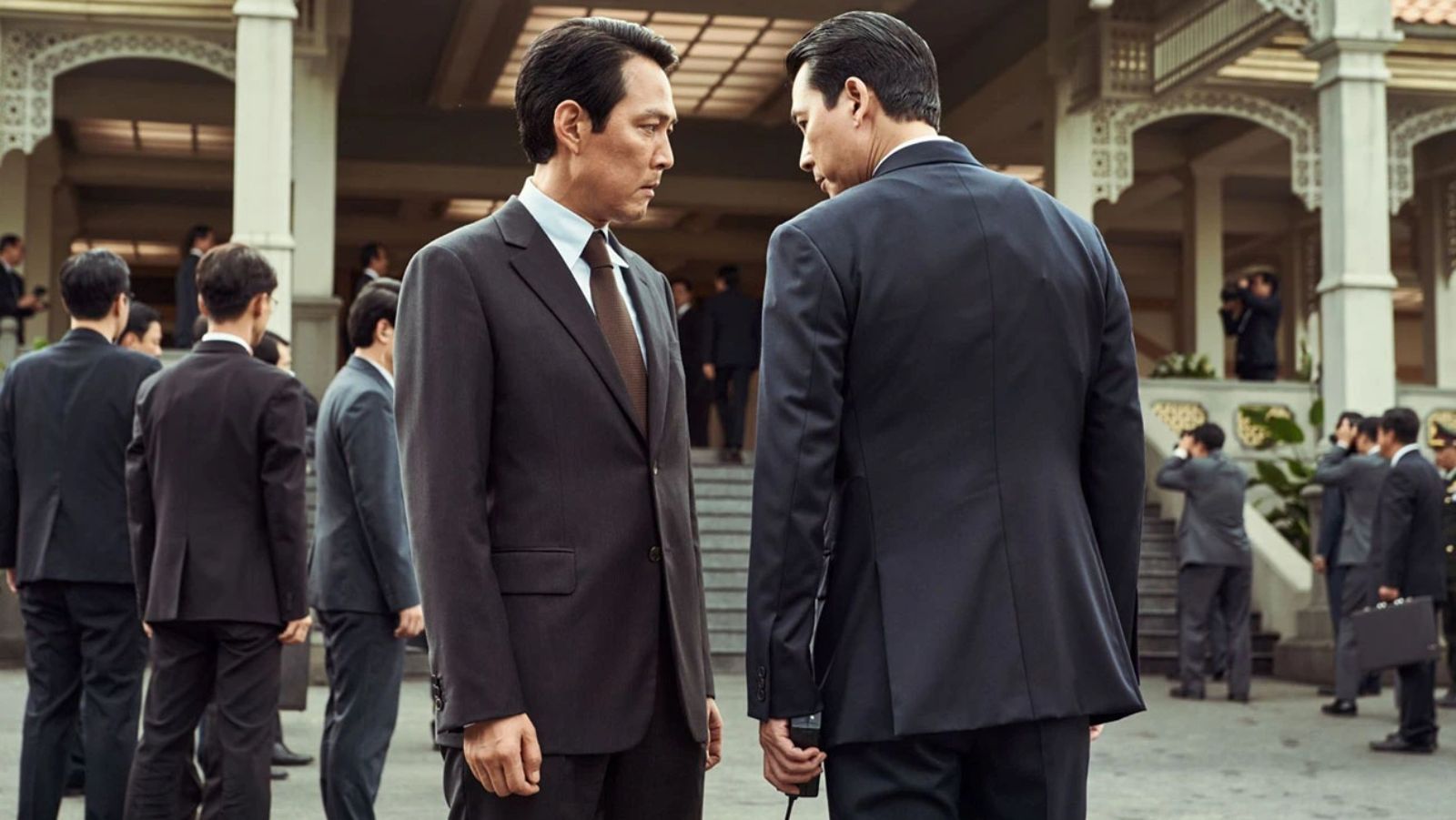 Lee Jung-jae’s writing, directing, and producing debut Hunt is a tricky film, a wolf in sheep’s clothing. At its heart this is a 50-50 blend of The Raid and JFK, but camouflaged in espionage procedure.

It’s 1983, South Korea. The 1979 assassination of the president / coup by the Korean Central Intelligence Agency (KCIA, since renamed the NIS––National Intelligence Service) has left a wake of political chaos and widespread distrust across and within every government agency, the kind that forms a melodramatic web of tension so knotted it would take 25 pages to unpack in narrative detail. Moreover, North Korean attacks are an ever-present threat, and intelligence is leaking from South Korean agencies like oil from a BP oil rig, assuring the presence of a mole: Donglim.

Park and Kim are not friends, to put it lightly. In Park’s defense, it would be tough to befriend your competitive ex-ruthless-military-officer coworker if they’d personally implemented, designed, and subjected you to ten days of inventive torture à la Abu Ghraib. Especially if they still stand by their every move. The insanity of their shared background story and hostile tête-à-tête relationship occasionally surfaces in The Other Guys-esque buddy cop comedics that almost feel like self-parody. But it usually manifests in all-out brawls, bitter undercutting, sly deception, gritty stare-offs, more torture, and beguiling below the belt spy vs. spy action.

It’s not worth getting deep into the narrative acrobatics of Hunt in a review. It’s the kind of film that changes gears every two minutes. Everyone’s investigating everyone, everyone’s a mole to someone regarding something, no one is what they seem to anyone, and more hyperbolic statements fronting as reasonable claims in the context of a story that ultimately exists in the realm of impossibility. When the plotline isn’t surprising you, other things are: bodies falling suddenly through rafters, million-bullet shootouts with record-breaking body counts, torture sequences so elaborate they must’ve come from the Bush administration itself, a boss-firing scene so fantastical and satisfying it almost makes all 131 minutes worth it alone. Yet through most of the proceedings—except the last thirty minutes or so—it maintains a sense of reality by just a hair. If bodies sailed one more inch through the air after a punch or sustained one more fatal injury the way the Black Knight sustains a flesh wound, we’d be square in the realm of fantasy.

In violence and narrative logic, the masculine energy drips from every frame. On what world can two separate departments start beating the shit out of each other in the hallway at work to no consequences? A traditional man’s world. But, as Hunt so knowingly posits: “How long can you fight fire with fire?” At some point what feels like a smart, compelling, tightly wound procedural with the action sensibilities of RRR becomes a comical expression of inane violence blitzed with twist after twist that you can’t help but not take seriously.

In one scene a man tries sacrificing himself to kill a more important man, pulling the pin out of a grenade and throwing himself onto the back of the car the target is in, only to be spotted and sniped off the car before the grenade blows him to bits in the street. And that’s one of the calmer crazy stunts, only described here because it was one of few I could coherently put into words. Eventually, commie talk and spy maneuvers and double-, triple-, and quadruple-crossers—whose motivations are lost somewhere in the political power game of it all—lose their sheen. The explosiveness and wavering intrigue and sleek blue-gray cinematography minted for a cop movie––the kind that reflects thematic consideration and well-crafted execution in matching the steeliness of its hard-nosed leads––can’t do enough to save it.