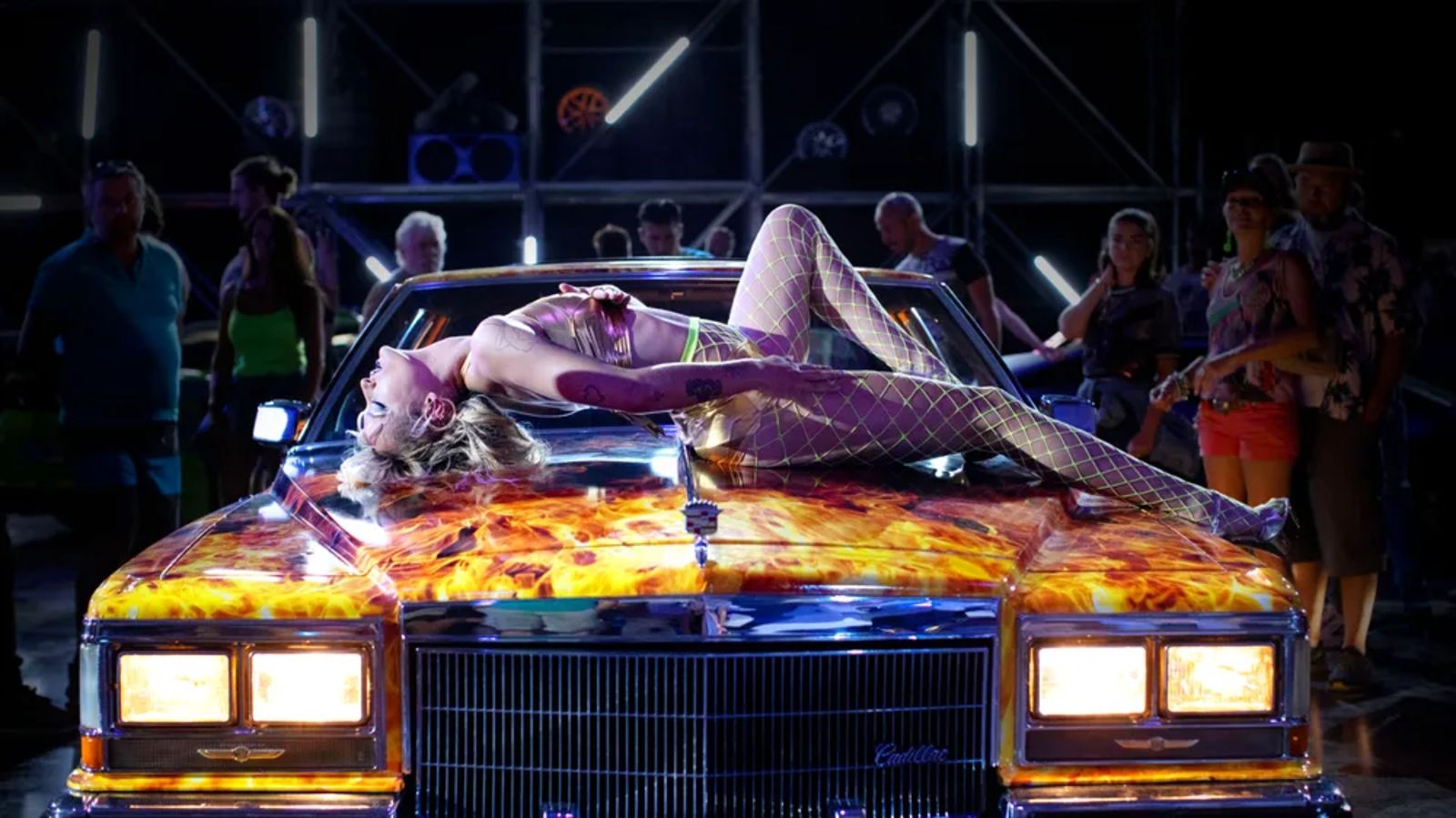 Titane begins not with a whimper but a cacophony: a deafening engine rev; the crash as car meets concrete; then the image of a girl in a horrific head-brace, like something from a Saw film, as she gets fitted with a titanium plate. Next a temporal leap to a car show, erotic dancers, pulsating synth music, chrome, and neon. The girl from the crash appears from the milieu, now a serial killer and car show dancer. After the show, a stalker follows her to her car and gets a needle the size of a chopstick lodged in his eardrum. His mouth sputters like a piece of faulty machinery. Scarcely 10 minutes have passed.

Julia Ducournau, a Parisian whose debut Raw became the breakout success of the Critics’ Week sidebar at the 2016 Cannes Film Festival, returns to the South of France last week in Competition—a sharp ascendency—and it has been nothing short of sensational. An experience as invigorating as a pair of jumper cables, it premiered halfway through the second week as late-fest fatigue was descending on the Croissette and seemed to almost singlehandedly wake the festival back up—enough at least to capture the eyes and imagination of Spike Lee’s Jury who have awarded it the Palme d’Or; a truly shocking, punky choice that made Ducournau only the second woman in history to collect that award.

With Crash, David Cronenberg took J.G. Ballard’s futurist love letter to chrome and traffic and rode it headlong into the world of fetish. Ducournau takes a different route in her tale of automobile fixation; her world has none of the surgical ’80s sheen of Cronenberg’s. It is a much darker place, slick and grimy as motor oil. Agathe Rousselle plays Alexia, the metal-plated dancer who, after slaying her creeper, goes on a date with another woman and ends up killing her too, along with her numerous flatmates. On the run from the cops, she chooses to disfigure her body beyond recognition, taping up her breasts and, in one of the film’s most disquieting moments, breaking her own nose (though she looks pleased with the results). Her Machiavellian plan (the character is nothing if not pragmatic) is to imitate a boy who has been missing for years. In her most audacious move, Ducournau chooses to not only reunite this imposter with the boy’s father, a lonely, steroid-injecting fireman (an astonishing Vincent Lindon), but to even suggest some chemistry between the two.

A work of bold transgressions and hyper stylization, it echoes everything from Christine and Under the Skin to the films of Nicolas Winding Refn to, most of all, Cronenberg. That that list contains only men is no coincidence; indeed, beyond all the cannibalism and debauchery, Raw really did suggest a new lens on the body horror genre. For Titane, Ducournau takes many of the best elements of her previous film (the wild Boschian tableaus, the endless scratching, the gore) and adds a large helping of adrenaline to the mix. The breakneck pace of the opening sequence is somehow largely maintained throughout, though at the cost of some cohesion—better to race on, it seems, lest we stop to consider the reasoning or practicalities of her characters’ actions.

It is a boiling-hot provocation: funny, revolting, spicy as hell, and with a striking subtext of gender fluidity and sexual identity. (In Titane, the body is simply a cover on a chassis; a vessel made to be souped-up and modified.) In one outrageous early sequence, Alexia fucks a car and appears to get pregnant. Her efforts to appear as a boy thus become ever more precarious and grueling. In what is sure to be the film’s most controversial moment, Alexia attempts to use her hairpin to do something awful, yet when the weapon is removed it’s covered not in blood but petroleum. Almost everything here feels mechanical, a hyperreal futurist nightmare—even Lindon himself (the actor says he worked out for two years for the role) and his macho-men firefighters. In an unforgettable performance, Lindon treats us to not one but two dance sequences—Future Islands (delightful) and The Zombies (on-the-nose)—and gives the most memorable rendition of the Macarena since Richard Jewell. It is a startling film that will last long in the memory, and not only because of its Palme d’Or win.

Titane premiered at the Cannes Film Festival and will be released by NEON.