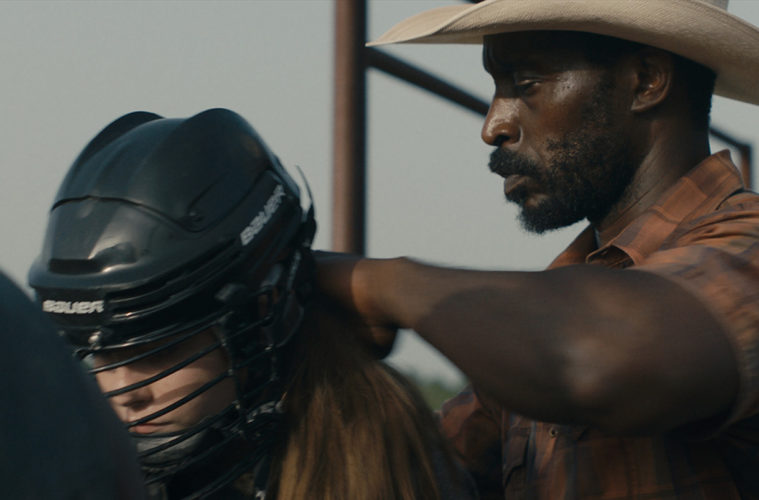 There’s not much to do around Kristyl’s (Amber Havard) hard luck subdivision besides getting into trouble at her age. With parents too busy or in jail (as is the case with her mother) to have the financial security necessary to keep a close eye out, these teens end up spending their days searching for new spots to get drunk and/or high without an imminent threat of incarceration. So maybe Kris punches a classmate in the face. Maybe she takes her little sister (Keira Bennett’s Chance) to the river—the exact spot their grandmother (Keeli Wheeler’s Marjorie) implores them not to go due to the water being unclean. Or maybe she breaks into the home of an absent-on-the-weekends neighbor (Rob Morgan’s Abe) so her friends can trash the place.

This is the downtrodden rural Texan existence that Bull director Annie Silverstein and co-writer Johnny McAllister establish for Kris. She wants to be “cool” like her mother (Sara Allbright’s Janis) without grasping where that road leads; apathetic like the punks (she has a crush on Reece McClure’s Daryl) who run roughshod around the neighborhood; and strong enough to provide for the family now that it’s obvious grandma can’t do it alone. Despite the attitude she adopts to get there, however, Kris remains a good kid at heart. When Abe forgoes pressing charges for what she helped do to his house (not to mention the alcohol and Oxycontin consumed and/or stolen) in lieu of forcing her to work off the debt, she complies and ultimately embraces the newfound structure.

He’s an aging rodeo man whose riding days ended after a horrific injury that transitioned him to bull wrangler extraordinaire guiding the beasts away from bucked-off and prone cowboys. Working the big shows every weekend pays the bills enough to keep his chickens fed, but the job isn’t getting any easier and the bosses realize he might be too much of a liability to retain. So Abe works smaller shows as an excuse to hang out with friends (Troy Anthony Hogan’s Mike), cross paths with familiar faces of old (Yolonda Ross as his ex-girlfriend Sheila), and distract him from the depression-fueled, heavy-drinking spells his career’s impending fate conjures. Like Kris, he’s stuck. And the ways they seek to dig themselves out seem to make things worse.

It doesn’t help that both are alone. They have people around them to keep them company and combat the existential weight pushing them a foot into the ground, but no one to appreciate what it is they want. Kris yearns for more than a life in and out of jail thanks to the drug exploits of a local dealer/pimp (Steven Boyd’s Billy). Abe craves the ability to let the excitement of the rodeo fill him with adrenaline until the day he dies. So while they attempt to walk the usual paths of those around them, their hearts aren’t quite in it regardless of success. Because money is a means to an end rather than the goal, its absence isn’t enough to make them quit on their unlikely dreams.

Bull is therefore about potential. Silverstein is placing these relatable (whether they’re familiar or not) characters on-screen to show us that small-town aspirations aren’t worth less than those in the big city. She’s giving Kris and Abe authentic scenarios catered to their ages that let life run its course. And rather than force them into splashy drama that pushes the narrative to a place of closure, she allows them to react, adjust, and endure. I use that last word because the one these films usually care about—”evolve”—doesn’t necessarily apply. Instead of sending her leads down a road that will change their circumstances, Silverstein merely provides each a crucial confidante to silently endure the unavoidable (but not insurmountable) pain we’re all destined to experience with them.

Not only do they not realize how desperate they’ve been for such an ally, they don’t exactly treat each other like the indispensable figures they are thanks to the constant backsliding towards old habits and misguided frustrations. One misstep or disappointment is all that’s needed to fall into destructive patterns. And that goes for walling themselves off from the other when pride inevitably overpowers vulnerable empathy. Abe never once asks what’s going on in Kris’ life to discover how futile her future looks. She doesn’t ask him about his either, but that’s more because she’s too young to fully understand his struggles by comparison. Their actions speak louder than words, though, to appreciate the other anyway. Their simple proximity provides more unconditional love than they’ve possessed in years.

It’s visible thanks to Morgan’s resonate performance as the linchpin who leads by example for many non-professional actors I’m assuming are playing versions of themselves. Add his work with the bulls (it’s as though Silverstein filmed real rodeos with her star in the thick of danger) and his success is indisputable. While the uncertain nature of the sport lends a suffocating tension to the whole, the complexity of his character’s day-to-day struggle as a man who knows nothing else does too. Morgan’s Abe is thus the perfect contrast to Havard’s Kris because she seeks purpose beyond a presumed trajectory. In her eyes he’s a hero who escaped fate even if he couldn’t escape this place. As her mother continues letting her down, he provides a symbol of hope.

Bull opens on VOD on Friday, May 1.