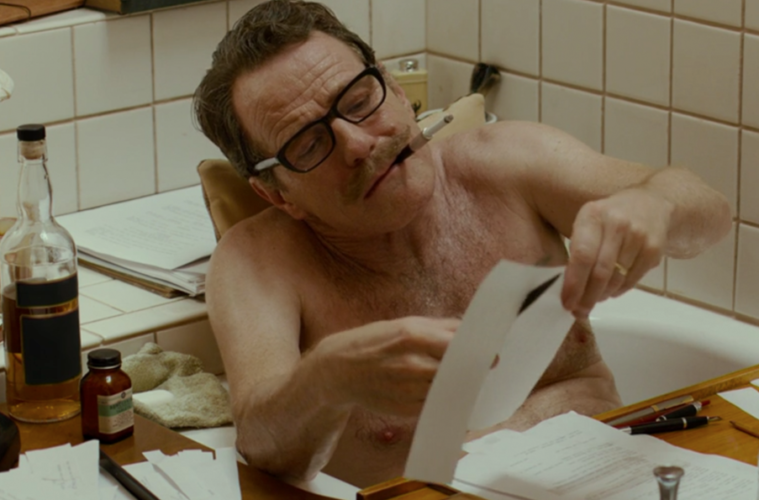 In his most substantial post-Breaking Bad role thus far, Bryan Cranston is going back in time. The actor takes the lead in Trumbo, a Jay Roach-helmed biopic centered on the life of screenwriter Dalton Trumbo. The writer’s credits for Roman Holiday, Spartacus, Papillon, and A Guy Named Joe are only a very small part of the story. During the anti-Communist fervor of the ’50s, the suspected Red was driven from Hollywood — by which point his career and personal life was left in tatters. The amazing part? Trumbo managed to continue writing thereafter, eventually receiving a public revival of sorts through the support of John F. Kennedy, Otto Preminger, and Kirk Douglas.

Ahead of a release next month, we now have a new trailer and clip for the film. While we didn’t get a chance to check it out at TIFF, Variety said, “If history is written by the victors, then the Hollywood-blacklist biopic Trumbo comes as a last laugh for all those communist-affiliated talents who spent nearly a dozen years forbidden to write at all. That’s a metaphorical last laugh, mind you, as John McNamara’s stodgy screenplay seldom inspires more than mild chuckles, passing up a rich opportunity to satirize the political hypocrisy of the paranoid times it depicts, and opting instead for a square, period-stiff homage to Spartacus scribe Dalton Trumbo, who stood up to the system and refused to let his voice fall silent.”

The successful career of 1940s screenwriter Dalton Trumbo (Bryan Cranston) comes to a crushing end when he and other Hollywood figures are blacklisted for their political beliefs. TRUMBO (directed by Jay Roach) tells the story of his fight against the U.S. government and studio bosses in a war over words and freedom, which entangled everyone in Hollywood from Hedda Hopper (Helen Mirren) and John Wayne to Kirk Douglas and Otto Preminger.