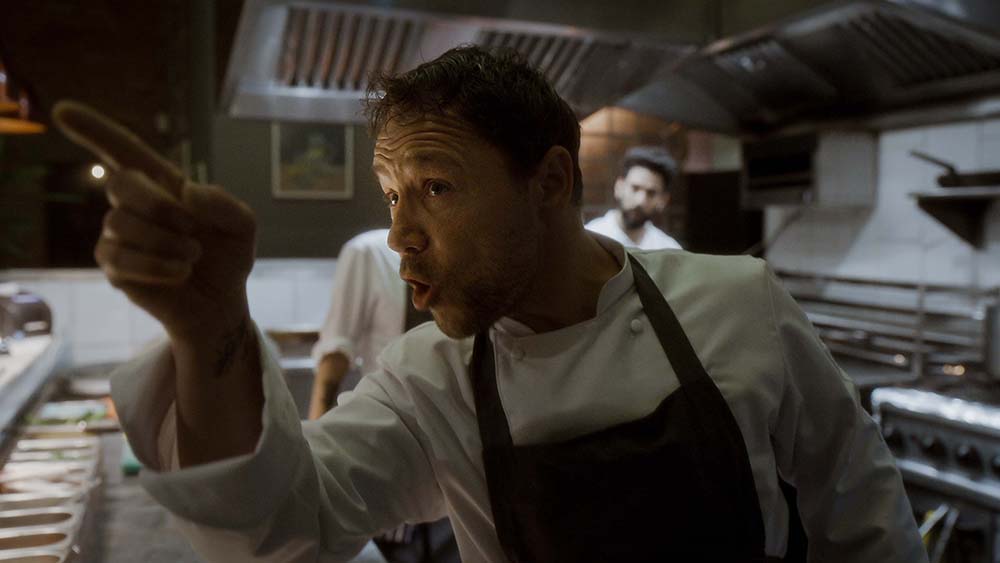 More often than not, one-take films struggle to justify their gimmick. Whether shot in one go or utilizing an intensive editing process to appear like so, the technique almost always threatens to overshadow whatever story is at the center rather than emphasizing it. Used correctly, it can prove immersive in the exact same way as a theatrical production—breaking down barriers between performer and audience, who can see their work unfold in real-time. Unfortunately, the impracticality of telling a story this way is usually highlighted via several scenes of actors slowly walking between filming locations.

Boiling Point is among the finer examples of the one-take movie. Set within the confines of an increasingly claustrophobic location, director Philip Barantini’s film succeeds because it understands the limitations of shooting in this manner, using them to its advantage rather than trying to expand upon what something in this style could achieve. Thus it becomes the rare instance where this method of filming can become increasingly easy to overlook, the ever-mounting anxiety of its drama successfully distracting from formal constraints.

Adapted from Barantini’s 2019 short of the same name, we follow chef Andy Jones (Stephen Graham, who also appeared in that earlier short) on his way to work, stressed before he even sets foot in the door. As soon as he arrives his prep for the busiest night of the year is paused by a food-hygiene inspector reporting that the kitchen is not up to standard, serious changes necessary to ensure the restaurant doesn’t get closed down. But he can’t give that more than a passing thought just yet—especially as the evening’s clientele includes celebrity chef Alastair Skye (Jason Flemyng), Andy’s former boss who now seems to be deeply jealous of his success. Over the course of one night, with problem customers and a staff discontent with working conditions, his position as head chef at one of London’s most acclaimed restaurants appears increasingly at risk.

For anybody who has ever worked in the service industry, or a retail job in general, Boiling Point will likely prove uncomfortable viewing before it starts twisting the narrative screws. Every incidental character is an immediately familiar archetype: the middle-class family with highly specific requirements who insist they understand food better than the head chef, the minor social-media influencers demanding their meals be on the house, and the lively bachelorette party who staff lean on to hit internal alcohol-sales targets.

Put down on paper, Boiling Point has all the makings of an overblown farce, but the screenplay is restrained enough to avoid straightforward caricature—these people are all painfully recognizable, but not written in ways simplistic enough to be reductive to the overall drama. The same applies to events in the adjacent kitchen, all of which hinge on issues well-known to anybody with even a passing knowledge of the industry; one narrative arc leads up to a powerful rant about pay conditions and wage inequality. The film is at its best when anchored in these moments, to the extent that a later development designed to amplify tension seems an unnecessary inclusion. The mundanity of low-paid work in the hospitality sector is already uncomfortable enough on its worst days.

Barantini shot four separate versions of Boiling Point (the finished result represents his third attempt), and it’s easy to imagine other forms that lean more towards melodrama to its detriment. After all, Andy Jones is very clearly the latest iteration of the angry, cursing chef that has been a pop-culture archetype since Gordon Ramsay. Thankfully this is a long way from relying on those sole characteristics in the same vein as Bradley Cooper in Burnt—the few angry outbursts significantly less interesting than the simmering stress plainly visible on Graham’s face throughout. The actor is characteristically excellent in the lead, even as you can see how it neatly casts him to type as another tortured man with a penchant for erratic mood swings and expletive-laden rants.

He singlehandedly manages to hold the film together during its latter stages as the restaurant’s night derails thanks to a plot development unsubtly foreshadowed in the opening act. His outbursts at fellow staff quickly dry up, replaced with the dawning realization he’s the one commanding this sinking ship. There have already been some lazy comparisons to Uncut Gems in this final act, the now-default reference when a character makes a questionable moral choice in the name of success or self-preservation; so far this year, filmmakers ranging from Sean Baker to Asghar Farhadi have had their work described in the same reductive way.

It certainly does a disservice to Graham’s performance in the film’s last stretch, his character’s anxieties turning inward while Boiling Point lapses into unrestrained histrionics. It’s a film that gets tantalizingly close to sticking the landing, but ends up a world away from what made it so agonizing in the first place. The well-observed realities of working in this industry are replaced with various contrivances, detracting from just how well Barantini managed to make an average night at work feel like the night from hell.

Boiling Point played at the BFI London Film Festival and opens in U.S. theaters on Nov. 19 and hits VOD on Nov. 23.