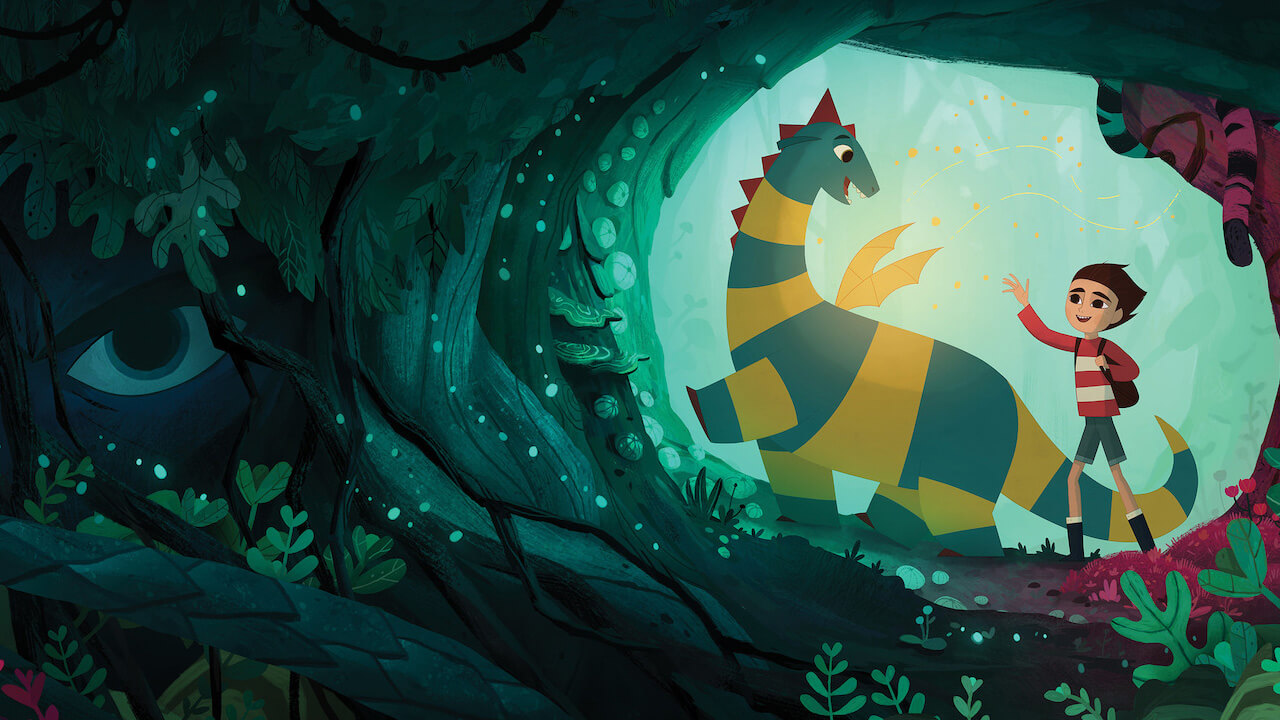 The films of Cartoon Saloon have an inherently folkloric quality, often feeling like tales that have been passed down through centuries—even if they are boldly original stories only loosely inspired by ancient accounts of the magical and mystical. It’s why an adaptation of My Father’s Dragon, the 1948 children’s book by author Ruth Stiles Gannett, is such a perfect fit for the studio, thanks to a narrator (Mary Kay Place) who presents the story as the real-life experience of her own father a generation earlier. It has the innate achievement of feeling like an urban legend, a tall tale given to new storytellers over the years and growing all the more fantastical with each person that claims authorship.

Much like the source material, My Father’s Dragon could have taken place at any point over the last hundred years or the next; a film happy to feel distinctly out-of-time where other films aimed at young audiences strain to feel relevant. But once the story arrives on the mystical Wild Island, it doesn’t have the same unique storytelling qualities that have made the studio’s prior work such an enduring treat. If it wasn’t for gorgeous, hand-drawn animation you’d be forgiven for thinking this was a lazy attempt for a studio to cash in on the success of DreamWorks’ How to Train Your Dragon trilogy, replicating both the mismatched buddy-comedy of those films and the balancing of slim fantasy lore with plenty of fart gags younger audiences can easily grasp. It’s the first Cartoon Saloon project that doesn’t seem like it would be equally beloved by two generations—children may love it, but to anybody older it comes across as their first big disappointment, a generic tale lacking in the rich cultural specificity of their earlier canon.

Jacob Tremblay voices Elmer Elevator, who in a very brief opening montage we see going from a prosperous life in the suburbs, where his mother runs a local convenience store, to their business closing down, his mother (Golshifteh Farahani) forced to move to the big city in order to make ends meet. As the weeks and months pass, Elmer quickly becomes aware that their plan to simply open another shop won’t be possible, a source of increasing frustration that leads him to leave their rundown new apartment to run away from home. Here he bumps into a talking cat (Whoopi Goldberg) who tells him of a talking dragon in a not-too-distant kingdom; if Elmer rescues it and brings it back to land, he could charge people to see it and make the money his mother needs to open their store.

Escorted to Wild Island by talking whale Soda (Judy Greer), Elmer’s rescue mission becomes complicated as he realizes that the creature is tasked with holding the island aloft to ensure it doesn’t sink into the ocean. Though his rescue is initially successful, he soon realizes the dragon isn’t powerful but a child just like him, named Boris (Gaten Matarazzo). With no powers to speak of, an injured wing, and a fear of both heights and water, getting him back to land is already an arduous task—before the creatures of the island (led by Ian McShane’s gorilla) start their mission to make sure he doesn’t escape.

The film is at its strongest in the opening stretch, before we’re flown out to the fantastical kingdom of Wild Island, as we explore the effects of a recession entirely from a child’s eyes. It’s a perspective of living from paycheck to paycheck rarely offered in cinema, which tends to focus on the parental worries of not being able to keep a roof over their child’s head, never taking time to add more depth to the differing concerns of a younger person who can’t comprehend why all their parents’ optimistic financial hopes aren’t panning out. It’s an opening act often recalling Jim Sheridan’s In America, a not-so-dissimilar tale of an Irish-immigrant family adapting to life in a rundown New York apartment with no secure work on the table. Like in that film, Twomey mirrors the separate frustrations of both parent and child, but crucially doesn’t turn solely to despair, allowing for moments of uplift and levity to punctuate their less-than-ideal living situation. If it makes sense why Elmer would want to escape to a fantasy kingdom, you never doubt for a second that he doesn’t want to return to his family as soon as he can.

As the film ventures to Wild Island from here, it increasingly becomes apparent that Elmer’s adventure won’t add any allegorical depth to the real-world struggles of his family, even if the island quite literally sinking appears to suggest this on the surface. If it weren’t for the repeated, increasingly grating references to needing to raise money to help his mother buy her dream store, it would feel like a completely unrelated story altogether: a run-of-the-mill hero quest that might keep the young ones entertained, but ultimately feels like a distraction from the more rewarding story unraveling in the big city. The film manages to sustain some interest during these stages purely through the typically striking character design, which pays effective homage to the original illustrations by Ruth Chrisman Gannett, stepmother of the book’s author. But while the hand-drawn animation winningly refuses to modernize those creations, the screenplay itself (by Inside Out scribe Meg LeFauve) follows a far more modern formula.

This is particularly disappointing when fleshing out the world of Wild Island is director Nora Twomey and LeFauve’s chief innovation for this adaptation (the setting is only paid a fleeting visit in the source material). Younger audiences may be thrilled at being granted a full quest, but that it feels like a separate narrative from the more grounded journey on home soil does leave the whole project disjointed; a story in the well-established Cartoon Saloon formula making way for a buddy comedy more reminiscent of your average DreamWorks effort. It’s something of a shame considering the rich cultural context into which Gannett’s story was released, a reflection of a younger generation growing up in Depression-era America that could easily resonate when relocated to a world still suffering the fallout from 2008. Fantastical elements never complement its more thoughtful social commentary, and the end result feels like two very different children’s films awkwardly stitched together.

My Father’s Dragon is another beautifully animated effort from Cartoon Saloon, but the story fails to hit the heights of their previous work—a familiar children’s fable that hasn’t been given the necessary modern makeover.

My Father’s Dragon screened at the BFI London Film Festival and will be released by Netflix on November 11.