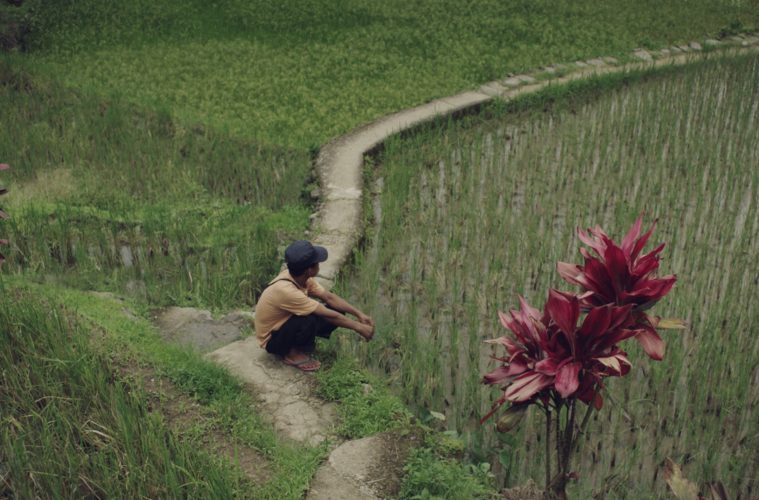 A cruise ship off the coast of Patagonia becomes a portal into the lives of others in Uruguayan director Alex Piperno’s stubbornly esoteric debut Window Boy Would Also Like to Have a Submarine. Marrying a lo-fi aesthetic with heady sci-fi concepts is nothing new within the world of independent film, yet Piperno appears more interested in tracking the loneliness of his characters, foregrounding isolation over plot machinations. Window Boy does little to differentiate its characters, having them, and the film as a whole, remain enigmas.

Mainly taking place on a cruise ship, the film follows Daniel Qulroga’s unnamed sailor, who is about to be fired from his job for constantly disappearing. The reason for these disappearances quickly becomes clear, as the sailor has discovered that a doorway on the ship, in fact, leads to a women’s (Inés Bortagaray) apartment in Montevideo. Separately, in the Filipino jungle, a concrete hut is discovered by a ranger (Noli Tobol), leading the villagers to question what is inside the hut and, ultimately, where it might lead to.

That the hut, also, leads to the cruise ship is perhaps unsurprising. As the villagers attempt to solve the riddle of the concrete building, the sailor becomes closer to the woman in the apartment, sharing wine and discussions of their associated isolation, highlighting the connections that can happen across physical and temporal boundaries. Yet the questions still linger: Why is this ship the attached point between locations in the first place?

Window Boy refuses to answer these cosmological questions, as the boy moves through time and space with little rhyme or reason. What connection these places have to each other is never made overt. As such, those looking for structure within the film may come away with a lingering sense of disappointment. Yet in refusing the explicitly spell out these cross-cultural connections, Piperno has made an ambiguous (for better or worse) debut.

The ship itself appears to be a connecting point between opposing modes of living, as city and jungle become intertwined through the looming monolith of consumerism that is the cruise ship. That the ship is also a culturally-diverse, multi-lingual place highlights Piperno’s central theme. Yet these subtle connections are buried within overlaid silence and repeated banal conversation.

Further, in having the hut show up in an under-developed jungle where the villagers begin to offer the shack sacrifices and gifts, Window Boy embeds a class critique that is only hinted at. One never knows who these characters are outside of their one-dimensional characterization: isolation. Why the portal exists other than its ability to bring these diverse sets of people together is similarly ignored.

Though with no shortage of beautiful compositions, Window Boy Would Also Like to Have a Submarine is unwilling to develop characters or incident, ultimately resulting in an unengaging experience. The flat characters become representations of generalized cultures or institutions rather than fleshed-out people. While definitive conclusions are not necessary for a narrative, within this film’s context, a sense of humanity is absent. While interesting in concept, the themes Piperno is working through become emotionally abstract and Window Boy muddles its main message.

Window Boy Would Also Like to Have a Submarine premiered at the Berlin International Film Festival.