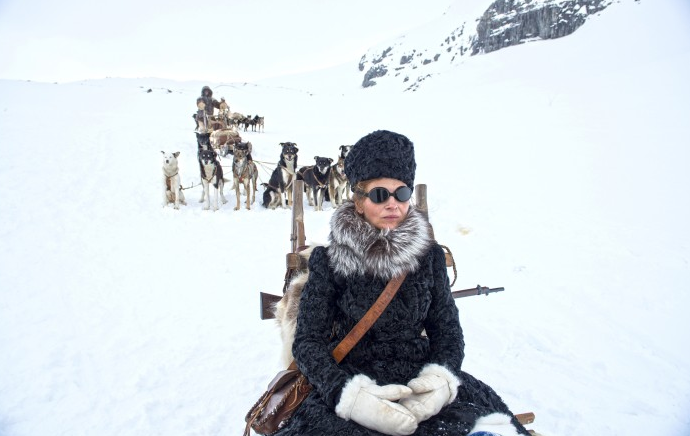 [Berlin Review] Nobody Wants the Night

Film festivals sometimes treasure specific directors for reasons that remain unfathomable to external observers. The Berlinale’s continued advocacy of Isabel Coixet is a perfect example. Nobody Wants the Night is not only her seventh film to screen at the festival, but in a year boasting one of the most impressive main competitions in recent memory, it somehow managed to get elected as the opening film. At least things can only get better from here.

Set in 1908, the film depicts Josephine Peary’s (Juliette Binoche) attempt at joining her husband, Robert Peary, on his mission to be the first man to reach the North Pole. We are first introduced to Mrs. Peary lying on the ground in a field of snow, aiming a rifle at a polar bear. After shooting and killing her target, she ecstatically runs up to its bloody corpse and shouts at the sky, “Take that Park Avenue!” Although this introduction would have sufficed to make it clear that she is a tough woman despite her affluence, there will be countless scenes, including a dream sequence, elucidating her strength of will through redundant expository dialogue.

This approach mires the entire script. Although the meager plot only offers overly familiar developments, characters and themes, the film feels the need to explain everything vocally — the first act is entirely dedicated to having characters try and dissuade Mrs. Peary from embarking on such a perilous journey. After much ado, the gruff and seasoned explorer Bram (a monotone Gabriel Byrne) reluctantly accedes and together with a group of Inuit, they set off into the vast whiteness on dog sleds.

Here the cinematography takes surprisingly little advantage of the spectacular nature (the film was partly shot in Norway). What little is shown of the landscape is primarily done through insert shots, whose differing texture seems to indicate that they were sourced elsewhere. By portraying the characters in close-up most of the time, the film has difficulty generating a sense of danger and adventure, so that when the mission does inevitably run into trouble, lives are lost with little impact. The insistent string and piano soundtrack that kicks in at any critical instance – and, even more regrettably, during any consequential conversation as well – does little to make up for the lacking momentousness.

Following deaths and desertions, Mrs. Peary’s company is reduced to a single Inuk guide. They reach an outpost where a few members of Mr. Peary’s entourage have been left behind, including the Inuk girl Allaka (Rinko Kikuchi). After refusing to turn back despite the others’ pleas, Mrs. Peary is left to face the polar winter at the outpost alone with Allaka, thus initiating the film’s interminable second half.

Allaka, like all the Inuit in the film, is a smiling, obliging and unswervingly genial foil to Mrs. Peary’s obnoxious haughtiness, rendering the film’s remaining trajectory evident from their very first exchange. Yes, Mrs. Peary does eventually recognize the error of her prejudices and a bond forms between these two individuals from different worlds (helpfully, Mrs. Peary does at one point scream at Allakka, “My world is very different from yours!”). Even more grinding than the plot’s predictability, however, is the film’s depiction of the Inuit people, which is so anachronistic and inadvertently offensive, it makes the portrayal of Native Americans in Dances With Wolves seem downright commendable by comparison. The most grievous aspect is their English, which is exclusively made up of expressions one would expect from Inuit in a Tintin comic book, delivered in syntax-less sentences never longer than three or four words. Here’s a sample: “Sun go sleep now. Josephine no white bear. Bram white bear. Bram dead.”

Problematic portrayal aside, such speech does not make for captivating dialogue. Since the last hour consists of the two women locked indoors with one another and the film remains unable to generate anxiety or suspense over their dwindling chances of survival, their predicament gradually shifts from dull to exasperatingly dull. Following an unsatisfying and would-be tear-jerking conclusion, intertitles inform us that to this day, the Inuit continue to suffer the destruction of their land by outsiders, thus literally spelling out the film’s overarching message.

Nobody Wants the Night premiered at Berlin Film Festival.