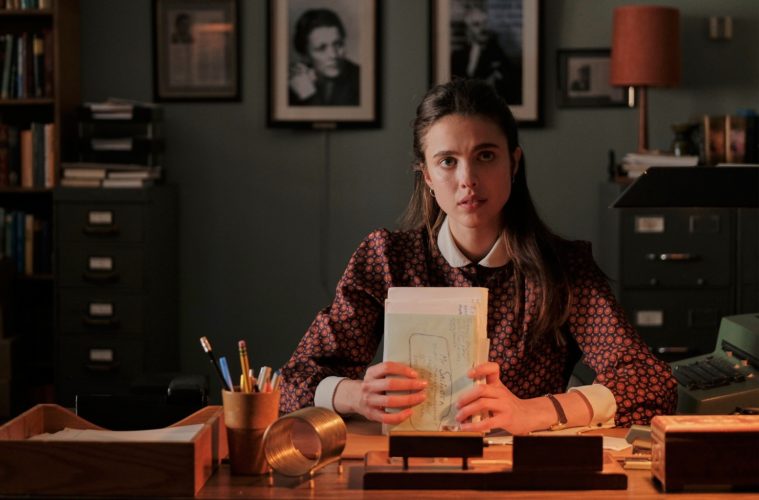 An aspiring twenty-something writer with a couple of poems in The Paris Review, Joanna’s just landed a gig at a New York-based literary agency. Working on other people’s manuscripts may not grant immediate access to the fabulous life of a published author, but at least it’s a foot in the industry. Plus, tiny it may be, Joanna’s agency is one of New York’s oldest, and boasts a slate of illustrious clients, including a man who by the mid-1990s–around when Philippe Falardeau’s My Salinger Year takes place–was possibly America’s last surviving Cult Author: J.D. “Jerry” Salinger, famed for penning The Catcher in Rye in the early 1950s, and for fleeing public life shortly thereafter. Sure, Joanna has most certainly heard of the man’s name, but hasn’t read a single one of his works, nor does she seem too preoccupied with plugging the gap. “I imagined his books to be quirky and precious,” she muses early on: “I didn’t want to be entertained, but provoked.” Too bad Falardeau’s Berlinale opener doesn’t quite succeed in doing either.

Based on Joanna Rakoff’s 2014 acclaimed memoir and adapted for the screen by Falardeau himself, Salinger tips its hat to a pantheon of New York-based portraits of young women struggling to find their bearings in the Big City. Played by Margaret Qualley, Joanna fumbles into Falardeau’s universe as a distant cousin of Greta Gerwig’s Frances Ha or Melanie Mayron’s Susan in Girlfriends. But Salinger has neither the incisiveness nor the comedic liftoff of Baumbach and Weill’s masterworks, coming across as unnervingly saccharine hodgepodge of ideas–far too many, and covered far too broadly–which ultimately succumbs to its ambitious scope.

Which is all the more baffling considering all the appeal the film’s premise seemed to offer. Recruited by icy boss Margaret (a chain-smoking Sigourney Weaver), Joanna is swiftly assigned to sort out the mail addressed to Salinger by fans from all around the world. It’s a gallery of aficionados whom Falardeau captures in a montage of first-person testimonials about the impact J.D.’s prose had on their lives, a disparate batch of outcasts united in their love for, and identification with, Holden Caulfield. But the letters are never delivered to the man himself, who saunters through Salinger in the shape of Tim Post’s blurred silhouette. Halfway through the 1960s, Salinger decided to cut all ties with the outside world, and the hermit-like retreat continued undisturbed until his death in January 2010. Which leaves Joanna to attend to an infamous task: read through all the letters to the author, and send them to the shredder right after. “We need to avoid another David Mark Chapman emulator,” her colleagues warn, recalling the 25-year-old who shot and killed John Lennon outside the Dakota in 1955, and then loitered by the corpse reading The Catcher in the Rye, which he quoted as his manifesto.

And yet Joanna can’t bring herself to follow the instructions. Defying Margaret’s orders, she starts replying to Salinger’s fans, dispensing advice off her own bat. It’s a move that–with all the ethical concerns it raises–promises plenty of conflict. But it gets drowned in myriad subplots, which drain oomph from the film’s gestalt. There’s an vapid melodrama straddling Joanna’s love story with her New York boyfriend Don (Douglas Booth)–whom Falardeau reduces to a caricature of a Norman Mailer-wannabe novelist who seems to exist solely to clip Joanna’s wings–and the accomplished musician and former partner she left behind in Berkeley, Karl (Hamza Haq)–who shows up in the city to sweep her off her feet in a Astaire-and-Rogers-like dance sequence that juts into being out of the proverbial nowhere.

There’s Joanna’s Devil-Wears-Prada-esque relationship with Margaret, and Margaret’s own liaison with colleague and friend-cum-lover Daniel (Colm Feore)–both of which are all too vaguely sketched out to elicit much empathy. Even as she departs from that Streep-Hathaway abusive power play to offer her pupil some parent-like advice, even as she allows for her cool facade to crumble, Weaver has very little to work with, and her tragic backstory strains for a pathos that remains well beyond Salinger’s reach.

And doesn’t Joanna herself end up embodying a slice of that quirky, fictitious and all-too pretty universe she feared she’d find in Salinger’s books? Yes, Qualley does all she can to add some sincerity to the girl’s struggles–professional, emotional, and creative–but she too comes across as a childlike, unnervingly shallow stereotype, compromising all hopes of connecting with her own Künstlerroman. “I didn’t want to be ordinary,” she says during Salinger’s preamble: “I wanted to be extraordinary.” Instead, she stands as an insipid archetype, stiff and antiquated like the office spaces she tiptoes into, filled by Elise de Blois’ production design with the moldy, stagnant smell of a world that hasn’t breathed new air in decades. A world as turgid and lifeless as the film’s own.

My Salinger Year premiered at the Berlin International Film Festival