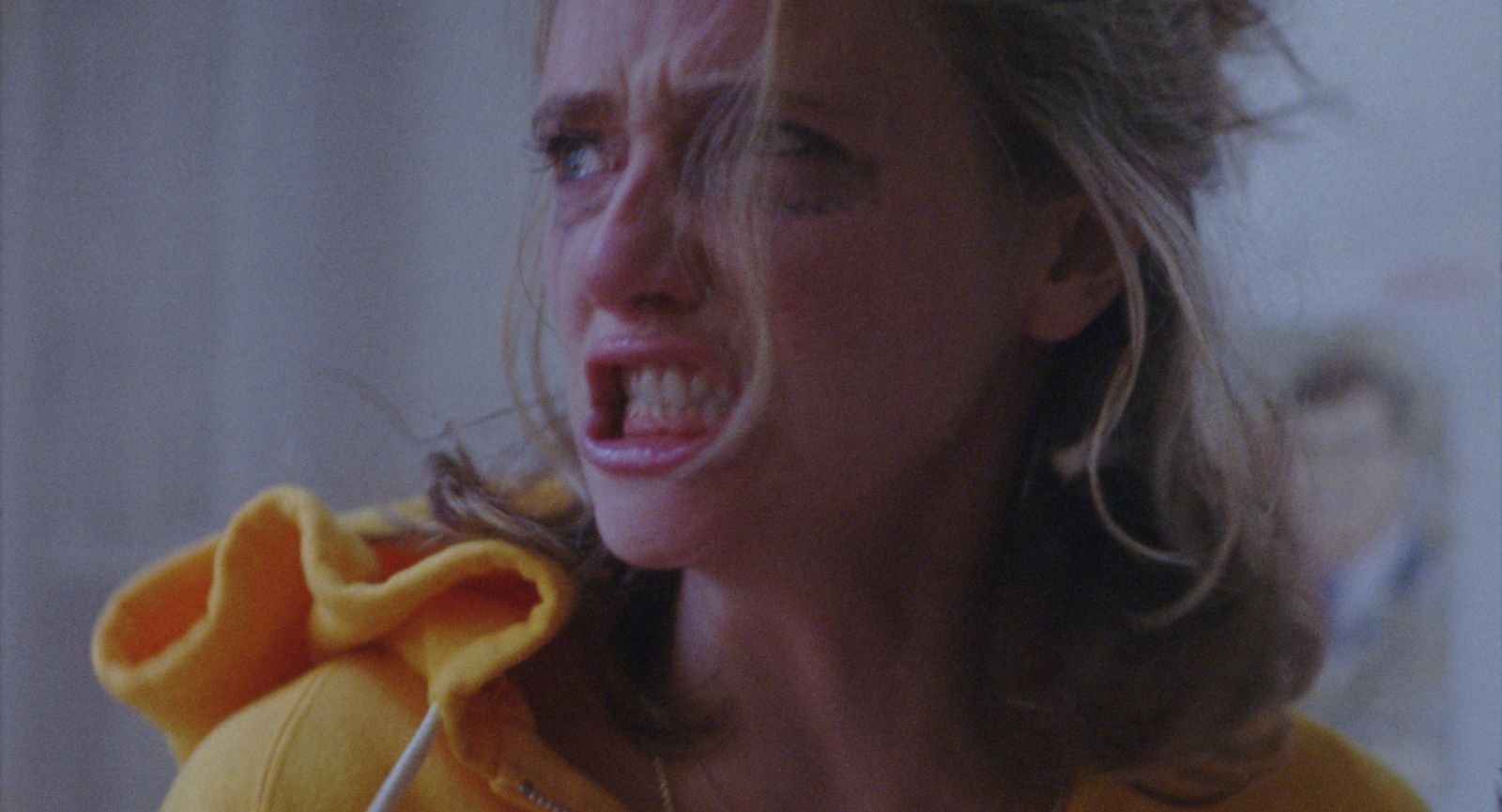 “She’s a very sick girl and she’s always been into, like, the UK,” says Noelle (Madeline Quinn) about her roommate Addie (Betsie Brown) to her new friend The Girl (Dasha Nekrasova). Sick fascinations are the instruments of demonic evil in Dasha Nekrasova’s debut feature The Scary of Sixty-First. Quinn co-wrote Scary with Nekrasova based on their shared feeling of futility in the aftermath of Jeffrey Epstein’s death. Unsatisfied with the story that Epstein committed suicide, in the summer of 2019 Nekrasova held “Epstein Truther MeetUps” to investigate his death with fellow skeptical New Yorkers. Her truther explorations became an idea for the film and Nekrasova’s Girl character could be a stand-in for the actress, but that isn’t too important. The real story with The Scary of Sixty-First is: if you speak of the devil, he shall appear.

While friends Noelle and Addie tour an apartment on the Upper East Side, everything from the creepy Realtor (Stephen Gurewitz) to strategically placed ceiling mirrors evoke a scummy vibe à la tattered sidewalk furniture: both make you ask what happened here. Like sidewalk furniture, the apartment is tempting because the price is right—but is it worth an infestation of bugs or unclean spirits? The girls think so. Initially Noelle stands indifferent to the questionable set-up and low rent in highly coveted real estate, but the arrival of The Girl helps open her eyes to the reality of her new home. Noelle and The Girl explore the supernatural predacious aura of the apartment, while Addie experiences night terrors and becomes possessed by one of Epstein’s underage victims. What’s more, she aggressively masturbates to photos of Prince Andrew and memorabilia from his wedding to Sarah Ferguson. This trio’s hauntings are brought on by the conspiracy Noelle and The Girl uncover and Addie’s adulation of Prince Andrew. Their obsessions summon death and a fate that’s worse for man––living with the knowledge of personal and structural evil over which you have no power.

The film’s triumph is its three leads, each a type of millennial. Addie worships in the cult of celebrity, ranging from old world Princes, Hollywood celebrities, and Instagram influencers. These shallow pursuits leave her vulnerable to possession. Noelle is disconnected from power structures but becomes interested when the right medium comes into her life (not unlike a listener of Red Scare). That medium is The Girl, who brings to light the evil nature of this apartment and that it belongs to Jeffrey Epstein. She connects the dots between his artifacts, symbols, and island in a way that doesn’t completely satisfy as a whole picture but, as presented for the purpose of the movie, is a plausible conspiracy theory (despite using trigger words like the “Clinton Crime Family” that turn off media elites and older liberals).

Scary’s cinematographer Hunter Zimny makes visual references to Polanski’s The Tenant and Kubrick’s definitive “elites are sex monsters” classic Eyes Wide Shut, but even better is his capturing the feeling of being alone with knowledge of tremendous evil in one’s presence. He conveys it with arching gargoyles at Epstein’s home and looming architecture in the neighborhood. Though Epstein is dead, his home and the New York real estate world he left behind continue haunting city dwellers who can barely afford to live in outer boroughs, much less a mansion. What’s more isolating is The Girl standing in the location of the movie’s most brutal scenes. At the film’s end, locations are mysteriously clean of blood or any trace of dark magic. All The Girl has are memories of what happened, and maybe the question if any of it was real. It’s reminiscent of Mia Farrow in Rosemary’s Baby, pregnant with the devil’s child. Here The Girl is pregnant with personal experience of evil that can’t be explained and barely understood. Unfortunately Nekrasova chooses to leave the film on this note; it isn’t a wholly satisfying one.

That’s not to suggest the movie should explain evil, something no theologian has unequivocally done in two millennia––though Scary does end on the tipping point between conspiracy and theodicy. Noelle and The Girl’s conspiracy sleuthing reveals the depths of Epstein’s depravity, but the random collection of evidence does nothing to suggest an alternative to his structural and supernatural evil; there isn’t a clear corresponding belief you can attribute evil’s yin to good’s yang. The system that allows Epstein’s type of evil is global capitalism; Nekrasova’s own sprezzatura smartly doesn’t permit the movie to make a useless statement like “deconstruct capitalism.” But supernatural evil is random in this assemblage of the world. Early in the film comes a harrowing moment where The Girl makes a Sign of the Cross, presenting some opportunity to pause and reflect on the evil she encountered––a means to not only understand it as a black void of futility looking back at her.

While Nekrasova opts not to take the route of theodicy with The Scary of Sixty-First, it might have been more beneficial than to attempt making sense of Epstein’s evil, per the never-ending thread of conspiracy. The problem of evil––if there is a good and omnipotent God, why do they allow wicked acts?––is a question explored over the course of one’s entire life, ultimately a more satisfying pursuit than what The Scary of Sixty-First offers. While the film is not interested in showing evil’s inevitable punishment and the path for victims to find healing, Nekrasova’s chilling debut manages to firmly place Epstein’s crimes in a human story that elucidates the existence of unfathomable evil.

The Scary of Sixty-First premiered at the Berlin International Film Festival.