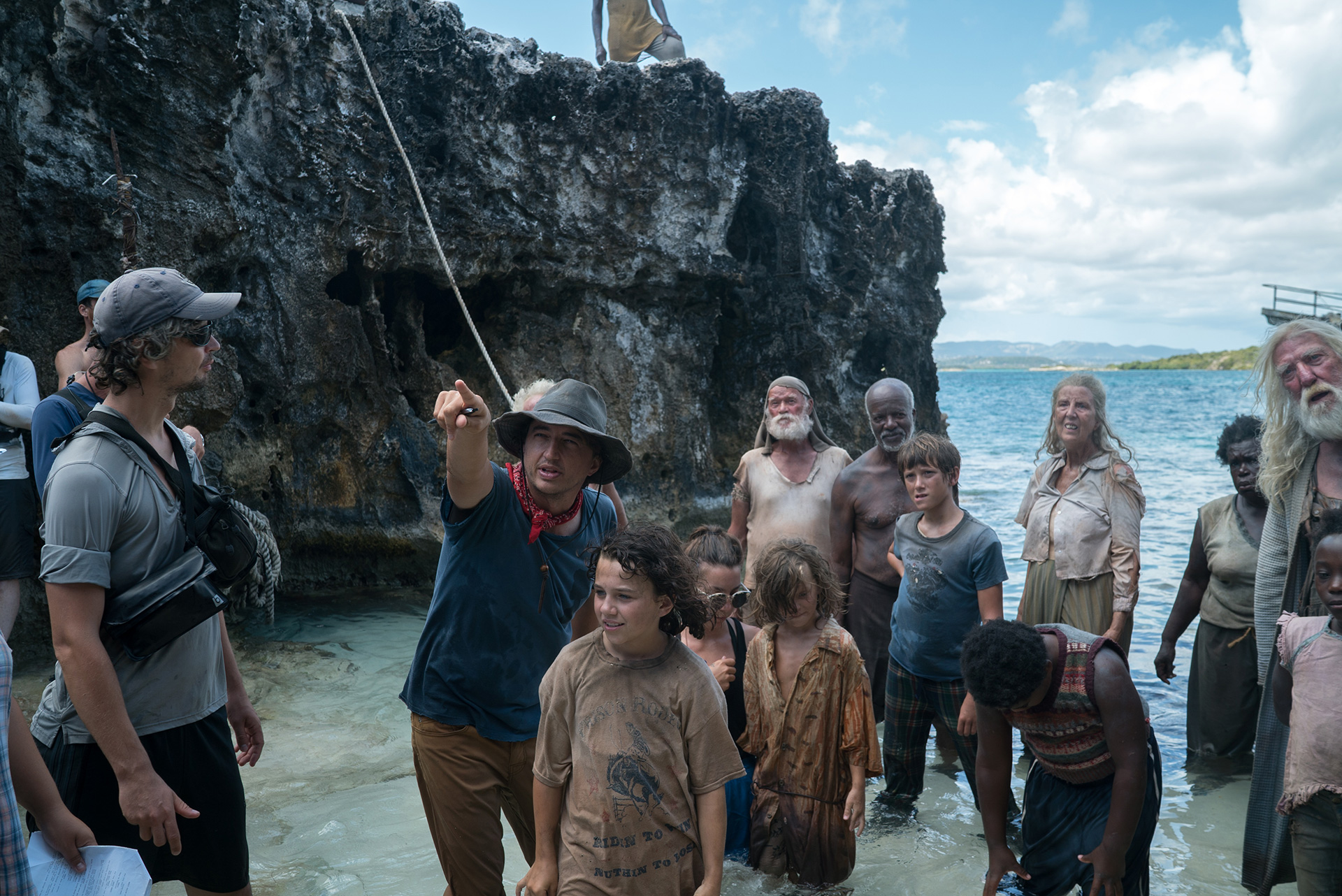 Beasts of the Southern Wild was the indie darling of 2012 having racked up prestigious festival wins en route to four Oscar nominations. Despite being credited to “Court 13” as a collective at the beginning of the end credits, the driving force behind the film was New York native and current Louisiana resident Benh Zeitlin. He earned two of those nods as director and co-writer while also serving as co-composer alongside Dan Romer. It was the type of whirlwind ride that propels many filmmakers straight to Hollywood and yet Zeitlin chose a different path.

That brings us to his sophomore effort, Wendy—a film eight years in the making that carries so many parallels with his acclaimed debut from its non-professional actors, child narrator, and do-it-yourself aesthetic. Conceived alongside his sister Eliza from their childhood memories appropriating Peter Pan into their own imaginative world, the project took cast and crew to exotic locales like the Soufrière Hills volcano on the island of Montserrat with the promise of fantastical creatures and magical experiences.

I picked his brain about his writing process, casting search, and ability to leverage previous success into an almost impossible level of creative freedom that allowed him to deliver on the promise of his unique vision. Check out the conversation below.

The Film Stage: You don’t generally spend eight years on a project unless it holds an immense purpose and place in your life. So what did Peter Pan mean to you and your sister Eliza growing up and what was the process of taking that impact and building it into the film you’ve made?

Benh Zeitlin: I think that we were haunted by the character very much as children. He was kind of a part of our imagination. We lived in a constant state of inventing worlds together as kids and he was always a figure [that was] there.

It obviously evolved radically as we moved from being kids for whom he was the hero [that] defied the inevitable process of growing up to taking on a very different role of reminding us of the quality that comes under threat as you get older. [We were] sort of wrestling with a lot of complicated—not moral, but “how you live” questions that were in the text as well.

As you grow up, you’re sort of told that there are these choices that you have to make between living in reality or living in imagination. Between being wild and free or being someone who cares about others and is responsible. These were all choices that we didn’t want to make. We felt we could have all these things, but the path wasn’t clear.

I think a big part of making the film was trying to find ways [where] these aren’t diametrically opposed philosophies or ways of thinking. That there’s a way they can all be the same thing. We sort of set out to discover that answer.

Was Wendy always in the back of your mind to do next or did the success of Beasts of the Southern Wild as its own work of magical realism allow you to think it was possible now?

This was always in some ways the “dream” project. Me and Eliza had talked about writing it and making it forever in various iterations and honestly this was the one we thought we would never be able to make. And what really changed with finishing Beasts and everything that happened after that was it opened up this possibility for us to make our dream film and design our dream process around it and challenge ourselves to do something—not that the story was unprecedented, obviously, but the way we wanted to make it in many ways was.

That opportunity was kind of miraculous for us. I think that we always hoped to make this film, but we never knew if it could actually happen. We kind of skipped over a bunch of other projects and went to the one we thought we would be making when we were like fifty, sixty years old.

A lot of Sundance and Cannes winners—let alone Oscar nominees—feel the pressure to strike while the iron is hot and therefore move right into big budget studio projects. Would you say you conversely saw it as the moment to go wild and delve into a seven-year process if the right situation presented itself to do so?

Yeah. Very much so. We knew that there were things in this film that, in any other circumstances, would have been considered impossible—things that we would have been [told] “No” to. Part of it was about being able to not force the film into a conventional timeline and to sort of let these processes and the film itself dictate how long things were going to take.

That applied to various things, probably the biggest one being that we wanted to make a film with a true, real pack of children: actor kids that weren’t necessarily well-behaved and that had no training. There was a huge casting search involved and there was a massive amount of time needed to develop the cast and their chemistry between each other and their skills. Those are timelines that are just not allowed in the way that films normally get made.

So part of it was this opportunity to really invest in practices that normally wouldn’t be possible. We needed those opportunities in order to make the film the way that we wanted to, so it was obviously spectacular for us to be able to see that through.

How big was Searchlight Pictures in all this to give you that time and space?

What was cool about how we entered into the process is that it was so much based on Beasts and Beasts being this film that was made totally unconventionally—really outside the film industry both in terms of the financing and how the way that we approached filmmaking flowed out of how we were making shorts. It resembled more of—we would get a bunch of people together to make a Mardi Gras float [rather] than a traditional film set.

There was a knowledge—to their credit—that Beasts could never be made in a studio. Had that script just been given to executives to figure out how to shoot it: A) they wouldn’t have done it and B) it wouldn’t have come out the way that it did. So there was a lot of faith in the process to let it happen organically.

And it really did follow a very similar—the precedent for the film was Beasts and there was no other precedent. So we looked at how Beasts was developed and how long things took to try and understand how this film would work. To their credit, they didn’t impose structures [they might normally impose] on this one. So we had that opportunity to do things in unconventional ways.

Was there any worry once news arrived that Disney was buying Fox considering Peter Pan was already in their stable of characters?

That happened very late in the game and it didn’t really change our team [at Searchlight]. Nobody was let go from the internal group that was making Wendy.

I think there was also a knowledge that even though we were working on a myth that’s been done a number of times and had things in development, nobody was worried that our film would be in any way similar to any other film—never mind any other Peter Pan film. We all knew that this was a singular project that wasn’t going to be like anything else. So there was an awareness that other things were happening, but there was never anybody concerned that, “Oh, we’re going to make the same movie as somebody else.” That didn’t seem like something that could really happen.

Did you ever approach the project in a way that would distance it further from Peter Pan? Like a removal of character names, etc. in previous drafts? Or was the connection to your childhood too powerful to even think about doing that?

We thought about that to a degree in terms of how we framed the film and talked about the film because it really wasn’t going to be a remake in any way. It was going to depart so radically from any story or source material that had existed. But there was a reason we used the myth.

I like to work from myth because you don’t need to build a world from scratch. You sort of start with the cultural knowledge and the cultural context of these characters that has already been established in the world. You almost start ahead and have an opportunity to play with conventions and preconceived notions of characters and there was quite a lot that we wanted to do.

A lot of the things that the film is trying to say are being said in comparison to the source material, particularly with the character of Wendy. We wanted people to look at our Wendy in that historical context and understand what we were saying about this character that was radically different from what other versions of this film have said about [her].

I don’t think there was ever a question to lose the source material. For us it was always a useful tool to bring the audience into a context and then pull the rug out and take them in a radically different direction.

What were the logistics of the casting process since you’re hiring these kids so many years in advance to be able to teach them what they need to know? Even just in making sure the parents remain on-board throughout the entire process.

It was like a grassroots operation. Again it sort of closely paralleled how we dealt with Beasts in casting most of the film in towns in south Louisiana—a lot of them down the bayou and off the beaten path. We were trying to get people to come out, to tryout for a movie who had never considered acting before or been exposed to it in any kind of way.

It was modeled on—a lot of people who initially came down to work on Beasts had just finished working on the Obama campaign in 2008, I believe. How do you get people to come out and vote who didn’t vote the last time around? There was a similarity because you can’t just put an ad in the newspaper and expect to find the people you’re looking for. You really need to go and find them. So we were in schools, in community centers, in churches speaking and sort of rallying people to come out for auditions.

When we went to the Caribbean to cast [Wendy], often there was even less structure because we were there during the summer. We would meet up with local people who knew their way around the island and we would really just go door-to-door and ask if [residents] had kids who were the right age who wanted to audition. And then we would audition them right in front of their houses.

It was a really involved search and hopefully when you get to the end of that you’ve found kids who both have incredible acting talent and are spontaneous and wild and mischievous. We didn’t feel like we could find those [traits] just in acting schools or from parents who had already told their kids they could have a job in acting. We had to look farther and deeper than that and I think that we hopefully found amazing combinations of those two worlds.