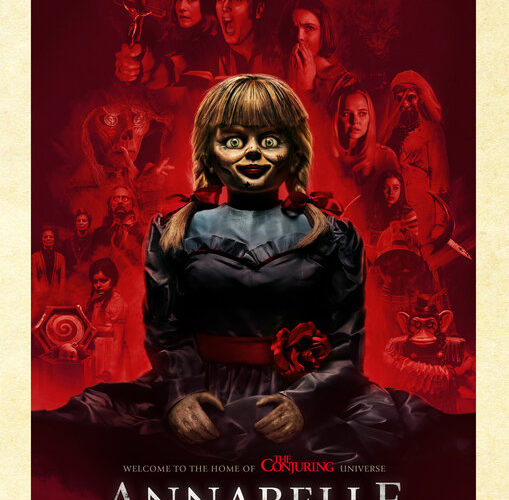 After an excitingly popular debut during The Conjuring‘s prologue, the creepily revamped Annabelle doll (its real-life counterpart was actually a Raggedy Anne) earned the title role in the first spin-off of this ever-growing horror universe. That installment left much to be desired with screenwriter Gary Dauberman eventually redeeming himself three years later with Annabelle: Creation, thanks in part to director David F. Sandberg. You might assume this demonic vessel would then be left alone since its tragic trajectory had now been fully drawn from the home of its maker to its ultimate resting place inside Lorraine (Vera Farmiga) and Ed Warren’s (Patrick Wilson) in-house museum of cursed objects. With a third Conjuring film still in production, however, producer James Wan and Dauberman hatched a plan to keep going instead.

The result is a stylistic bridge going by the name Annabelle Comes Home. Until now only Wan’s two Conjuring films followed the same aesthetic pattern of containing a brief vignette followed by text scroll and title a la The Texas Chain Saw Massacre before fast-forwarding to the main plot. Dauberman—making his directorial debut after also writing last year’s The Nun—is therefore consciously hewing closer to that central vein in order to bring his trilogy of scripts full-circle in a way that should officially close his saga for good. Remembering that there was still one character who hadn’t yet escaped Annabelle’s clutches despite earning its attention, he coaxes us back inside the Warrens’ home to spark a reunion with the paranormal investigators’ young daughter Judy (Mckenna Grace). The previous two Annabelle films taught us that the doll itself isn’t possessed. Its original owner’s parents made a pact with an unknown demon to bring their daughter (Samara Lee’s Bee) back from the dead. It tricked them into letting it affix itself to the toy, wielding Bee’s ghost to lure potential hosts into its clutches. What this movie’s prologue (the Warrens’ drive home from retrieving the doll at the beginning of The Conjuring) does is cement the fact that Annabelle can become a conduit for any presence. Like it used Bee and facilitated Bathsheba Sherman’s desire to hurt the Warrens by targeting Judy while they fought for the Perron family, its malicious master will gladly use whatever or whomever is at its disposal to achieve its goal.

Because Annabelle now rests behind chapel glass in a room populated by the most dangerous curios known to man, it’s only a matter of time before it earns its freedom to have fun playing with the nightmare fuel collecting dust upon the surrounding shelves. So when Lorraine and Ed go out of town and leave Judy in the care of a teenaged babysitter (Madison Iseman’s Mary Ellen), the table is pretty much set for violent ends. Having already experienced Annabelle’s wrath, Judy understands why she’s not to mess with the locked room holding it. Wanting to keep her job and uphold an image of responsibility, Mary Ellen would never even think to find a way inside either. The latter’s best friend Daniela (Katie Sarife), however, isn’t so deterred. While there’s more to her actions than mere rebellious curiosity, I’ll let the film explain those motivations itself. All you need to know now is that she does open the door, touches and laughs at whatever is within arm’s reach, and unlocks Annabelle’s cell before returning upstairs to join Mary Ellen and Judy. What was to be a quiet night of birthday cake celebration thus turns sour as a menagerie of monsters from the Warren’s “solved” cases rise from the shadows to keep this trio scared out of their minds. A werewolf prowls the perimeter while a homicidal bride and freaky ferrymen patrol the floor plan inside. Electronic devices turn on and off by themselves and board games appear out of nowhere to either offer fun or dismemberment.

The girls are trapped with only the pseudo comic relief of Michael Cimino’s Bob (Mary Ellen’s crush) to offer assistance when not also struggling to survive. Dauberman has definitely taken notes from Wan (and Sandberg) because he does a great job mimicking their atmospheric tone for effective frights. Give him credit too for never overdoing things. Despite so much at his disposal, he focuses on just three major baddies to cycle through and utilize in creative ways thanks to reflective surfaces, light sensitivity, and foggy dissipation. Judy, Mary Ellen, and Daniela must both combat and ignore each depending on where their next task-at-hand leads them. Either they enter a room first to be threatened by ill intent or second to conquer their fear of what might unfold. With numerous passages devoid of score to really ramp up tension, Annabelle Comes Home is keen to embrace its mounting dread rather than go full-bore into nerve-inducing chaos. While humor is present (to varying effect) thanks to its teenage protagonists and its roller coaster ride of random encounters does prove more unhinged than The Conjuring‘s streamlined confrontational drama, it still revolves around intimately personal battles independently fought within Judy and Daniela. After we delve into the former’s crisis of identity as the daughter of celebrity demonologists and the latter’s heartbreakingly desperate backstory, we realize why they’re so susceptible to Annabelle’s demonic influence. Mary Ellen must become their rock of support upon finding themselves stranded on this claustrophobic island without any means of calling the Warrens to save them.

It isn’t therefore quite the romp you might assume. Spontaneity exists with a wide array of artifacts and research at the girls’ disposal for good and bad purposes, but the result is just a highly concentrated dose of what we’ve come to expect from the series. There is, however, more to grab hold of personally since the subject matter has been returned to the living. This isn’t about Annabelle wreaking havoc or Valak the Nun wielding its might. Where most spin-offs were built around their antagonist, Dauberman focuses on his victim (Daniela) with a Warren (Judy) by her side to ward off evil’s desire. Those others almost ask us to pull for the demon so it may terrorize again. This one conversely lets life outshine death once more.