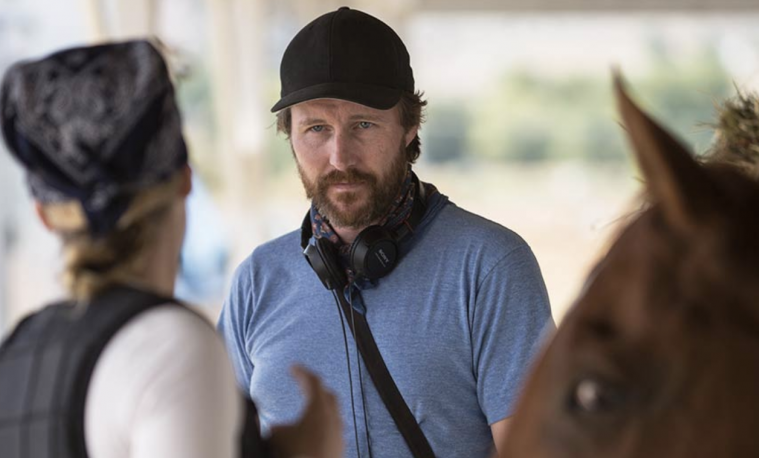 Andrew Haigh on Keeping Secrets, the Political Landscape, and Eluding Romanticization in ‘Lean on Pete’

Andrew Haigh’s partner gave him a copy of Willy Vlautin’s Lean on Pete shortly after he finished making Weekend, and after falling in love with the way in which the author portrayed a sensitive, resilient teenage boy, he decided to turn it into a film. It would take Haigh roughly another six years or so to turn the novel into a film, in the meantime working on HBO’s Looking, and directing 45 Years which earned him critical acclaim. Perhaps the wait was for the best, since the years in between where the same during which actor Charlie Plummer broke out into the business, and given his work as Charley in Pete, it’s hard to believe any other actor could’ve been better. Haigh’s conversations with Plummer, which focused on Charley’s sensitivity and why this boy who steals a horse to rescue him from the slaughterhouse, is a kid who rarely gets portrayed this way in movies.

“The book felt like an old style fable grounded in a very gritty reality,” said Haigh during a recent meeting in New York City, and Plummer anchored it with a naturalism that at times makes one think of James Dean in Giant. Pete is also a great showcase for Haigh’s evolution as a writer and director, his economy in dialogues always making a great contrast with the amount of visual information in each of his frames. The way he and cinematographer Magnus Joenck know what to show and when, to elicit the most unexpected emotional reactions. We spoke to Haigh about film rhythm, secrets and why he didn’t want to make another Old Yeller.

You’re a J.M. Barrie adaptation away from having your own “Pete trilogy.”

It’s gonna happen one day. Maybe I’ll do a mixture of both my Pete movies, which will be a very strange combination, I don’t think it will be a big hit.

Thinking about the lead characters in your films, I was struck by how you’ve created a body of work which showcases the different stages of being a man. A kid in Lean on Pete, a 30-something in Weekend, and then a 70-something in 45 Years. Were you consciously interested in doing this?

Self-consciously possibly. Most filmmakers when they make movies are trying to understand themselves and how they fit into the world. Even if the story of Lean on Pete might not seem like it’s a personal story, to me it is just as personal as Weekend, oddly. It says just as much about me as Weekend.

Is it weird to think that you’re letting audiences in on your secrets?

The weird thing about making films, especially if you make films that are personal to you, is you’re giving something of yourself to the world. It’s a strange feeling, filmmaking to me is anxious, emotional and stressful.

Lean on Pete felt like a big “fuck you” to Old Yeller and all those romantic movies about kids and their animals. Why did you want to show that adolescence isn’t bucolic and full of melancholy as those movies suggest?

I’m not a fan of those movies that romanticize boys and their horses, I think if there’s an animal movie that spoke to me it was Kes by Ken Loach. There’s a version of these stories that aren’t about the animals, this one is about Charley and his feelings, wanting to be cared for, caring about something and all that. I understand that my movie creates a marketing challenge, because you go in expecting something that it’s not.

No Lean on Pete plush animal then.

[Laughs] That would be weird.

Charley’s story feels like the kind of thing a person would keep in their heart and only tell certain people about. I could imagine Charlotte Rampling’s character in 45 Years finding a picture of her husband as a young man with a horse, or Tom Cullen’s character from Weekend telling it to the guy he knows he won’t see again. I’d love to hear you talk about secrets and what we keep.

If you grow up gay you’re always keeping secrets. They’re secrets that could change people’s understanding of you. If you’re gay, you think your parents will stop loving you for instance. As human beings we’re always one centimeter away from falling into loneliness and despair at any given point. You’re scared of being alone. Charley in the film is a very lonely kid, he keeps these secrets and doesn’t tell authority figures, he’s afraid of being put into foster care. Those kinds of secrets are painful and the only one he can talk to about this is the horse. I always found that tragic, rather than cute or adorable.

You lived in the liberal paradise of San Francisco while doing Looking, while Lean on Pete focuses on people living at the margin of society, people who might’ve voted for…

…exactly. Lean on Pete reminded me of American Honey which is another film by a British director who was able to see America right in the eye without any of the romanticism artists often use to portray poverty. What insight did you get into America by exploring these contrasts?

I filmed this before Trump, but there’s no escaping the fact that some of the characters in the movie would’ve voted for him. From my personal and fiscal views I would call myself a democratic socialist. I’m not on Trump’s side whatsoever, but one of the needs of being left wing is to find a world where people who are suffering economically are helped. You can disagree fundamentally with who people have voted for. I don’t think voting for Trump was a great solution at all, but you can also have sympathy for the fact that these are people who are really struggling, socially and economically. In the film I had to take out the notions of left or right wing. You need to understand people at a base level. You need to understand people are suffering and need to be compassionate. Kindness and understanding should be where politics are seen from, but on the left and the right that’s rarely the case. I don’t wanna go on a big rampage, but I get angry with the left wing media because they don’t seem to care about the people who were left behind by globalization. They don’t care about people struggling economically. We live in a world where identity politics is more important than economic inequality.

At the beginning of the movie, Charley’s father tells him something along the lines of “all good women are waitresses at one point” and later in the movie this becomes true so to speak. Do you find as an adult that something your mom or dad told you, was true?

I love in films when little bits of information are echoed later. It’s true though: our parents give us our understanding of the world. I like that about this story. Even though Charley’s dad isn’t great, he loves his son. I didn’t want the characters in the film to be one thing. The Del character could’ve been an angry horse owner or a father stand in, and he’s all and none of those things.

It was so great to see Chloë Sevigny and Travis Fimmel playing outside of their type too.

The thing I love about Chloë is that she’s a great character actor. She can fit well into a working class environment more than many other actors. She says she sees herself as a character actor, but a lot of people in the industry don’t want women to become character actresses.

Can we talk about how you use time in your films. Weekend feels like it takes place in a matter of seconds, 45 Years has a more languorous feel, Lean on Pete feels slow because we’re always dreading something bad happening to Charley. How do you define the way in which you’ll shape time?

It’s a very instinctual thing, my films have a certain kind of pace that you either sign up to enjoy or not. In Lean on Pete I knew I wanted it to feel like it had a slow dread that keeps going on and on, like a horse’s feet constantly marching forward. Everything fit into that, once you know the rhythm everything else falls into it.

What animal would you steal?

Something very small I don’t have to feed often. That’s what’s interesting about the film. Charley feels capable of looking after this horse, but he isn’t. That element spoke to me about how we all want to be compassionate, but we don’t have the ability. We don’t always have the time, energy, or money to be good people.

Charley is very selfish too, which was refreshing.

He makes wrong decisions. He’s not always wise. He’s on the cusp of being a kid and an adult. I don’t even wanna talk about all the bad decisions I made when I was 15.