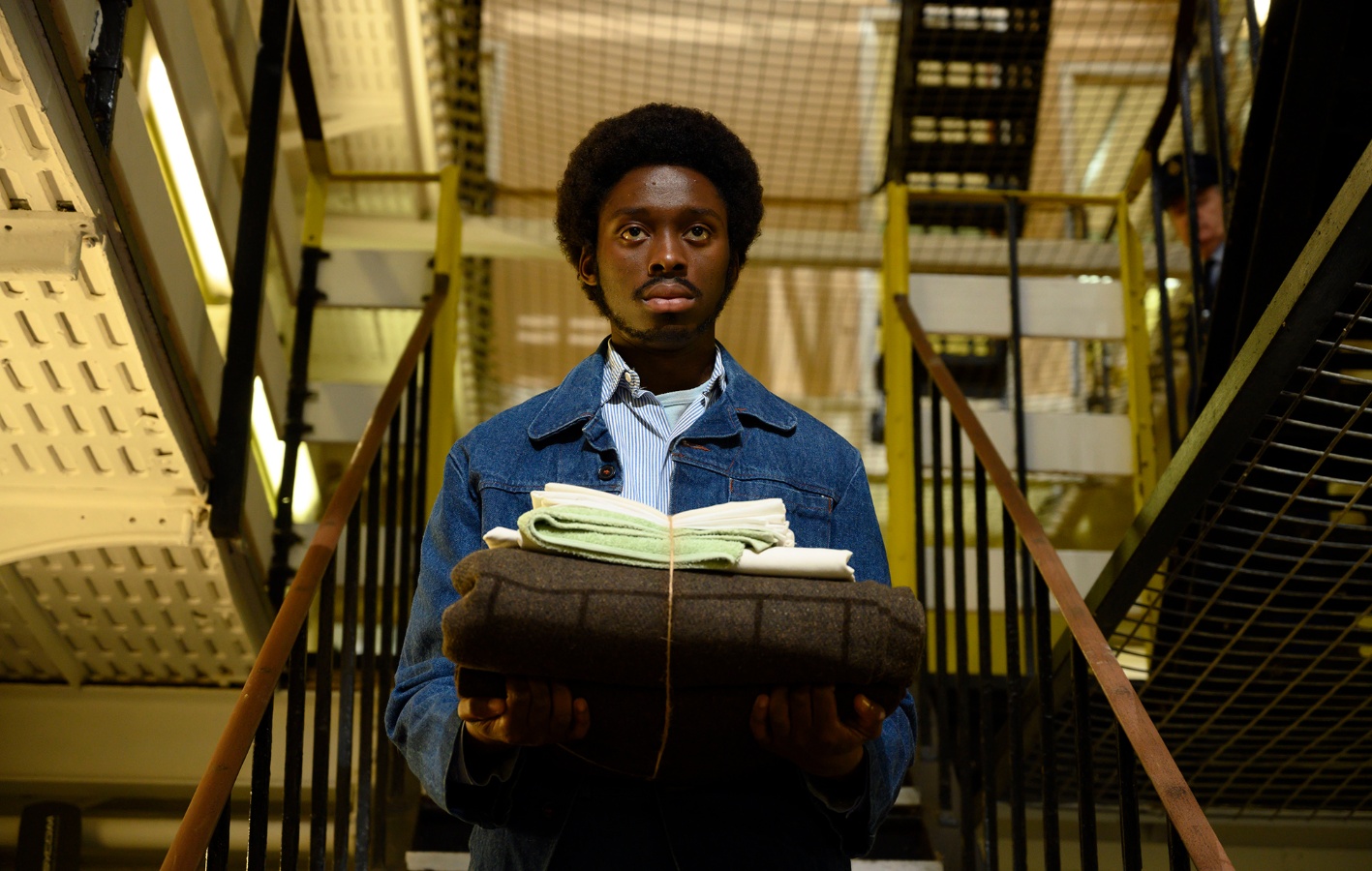 Alex Wheatle, the fourth entry in Steve McQueen’s Small Axe anthology, offers a modest take on the process of unlearning cultural attitudes and biases through the eyes of a naïve teenager. In 1980, Alex Wheatle (Sheyi Cole, in his debut performance) moves to a social services hostel in Brixton after spending his childhood in a group home, where he was subject to constant abuse from his white peers and caretaker. In Brixton, however, Wheatle finds himself immersed in the Black British community, from which he was displaced growing up in all-white Surrey, where he slowly but surely assimilates the patois, fashion, and most importantly, music of his culture. He quickly witnesses the casual daily oppression his community faces at the hands of the police and participates in the 1981 Brixton uprising for which he is imprisoned.

McQueen limits the scope of his biographical portrait to the relatively short period of Wheatle’s awakening, his transformation from a white-sounding naïf who believes the police are a beneficial institution to a righteous radical who goes to prison for standing up to state-sanctioned injustice. This slice-of-life approach to Wheatle’s radicalizing experiences in Brixton is welcome considering that Alex Wheatle otherwise features the weakest script in Small Axe so far. While it’s refreshing that the film operates on a relatively small scale, McQueen and co-writer Alastair Siddons often work against its ordinary charms by transparently infusing outsized emotional weight into almost every scene, even when they can’t bear it. This sort of external gravitas combined with the on-task nature of McQueen and Siddons’ script (many scenes communicate variations on the same idea) muddles the whole. Wheatle eventually becomes more symbol than man, someone who broadly represents anyone who discovered their roots later in life, which ultimately detracts from the specificity of his personal narrative. Alex Wheatle shouldn’t feel slight in relation to the three previous Small Axe films, but it does because McQueen and Siddons lend an unnecessary epic hand to what should be a personal drama.

McQueen and Siddons also rely on a ham-fisted framing device in which Wheatle tells his story to his Rastafarian cellmate Sideon (Robbie Gee), but not before crying out, “I have no story!” (In fact, he does.) Similarly, they employ bookending voiceover from an unnamed government official that fills in biographical and psychological details of Wheatle’s early life, all of which were either illustrated visually or easily surmisable. Alex Wheatle certainly throws U.S. audiences in the deep end with the West Indian accents and prodigious slang, but these structural details stick out like a sore thumb precisely because McQueen has generally committed to immersion over handholding in Small Axe. Plus, even correcting for the fact that Wheatle’s status as a young adult novelist is likely unfamiliar to American audiences, it’s still egregious to have Cole deliver dialogue like, “I think I’m gonna try to find my family…Maybe try and write a book,” and then immediately follow it up with title cards confirming the real-life Wheatle did just that.

Despite these regrettable writerly choices, McQueen and photographer Shabier Kirchner still excel at capturing small, potent moments that reveal a small amount but suggest so much more. Cole’s haunted hangdog expression speaks louder than his actual voice, and the times when Kirchner simply lingers on his face say more about the enduring effects of Wheatle’s childhood isolation than him saying things like, “You don’t know anything about me!” When Wheatle’s hustler friend Dennis (Jonathan Jules) invites him over to his family’s Christmas dinner, McQueen tightly focuses on his rapid eating and then doesn’t offer up a tidy explanation for his behavior. Instead, he follows Wheatle as he leaves the home as he tears up and takes a couple puffs from his inhaler, a heartfelt character moment that alludes rather than explicates. The film’s best scene follows Wheatle to his first trip to the local record shop. Kirchner slowly pans from Wheatle’s eyes all the way around the small shop, as a slowed-down version of The Flames’ “Zion” plays, perfectly capturing how a sheltered kid can have his entire world changed by the right song at the right time.

Alex Wheatle’s centerpiece sequence is a montage of archival stills of the Black People’s Day of Action, a city-wide march organized by Black activists after a house party fire claimed 13 youths that a police investigation declared accidental, despite strong community belief that a local far-right group committed retaliatory arson. McQueen lays sections from Linton Kwesi Johnson’s poem “New Crass Massakah” over the montage, which illuminates the reasons for the march as well as the uprising a month later. McQueen treats the sequence like its own short film, a depiction of a historical moment, through the words and images of the community at its center, that’s bigger than Wheatle himself. It’s a choice that recognizes that Wheatle is merely a small part of a greater whole, someone whose contributions are vital but that work in tandem with the actions of an entire immigrant population trying to eke out some semblance of equality. McQueen clearly believes that the story of Wheatle’s small part has as much weight as the story of the Windrush generation at large. It’s a shame that Alex Wheatle can’t live up to those intentions.