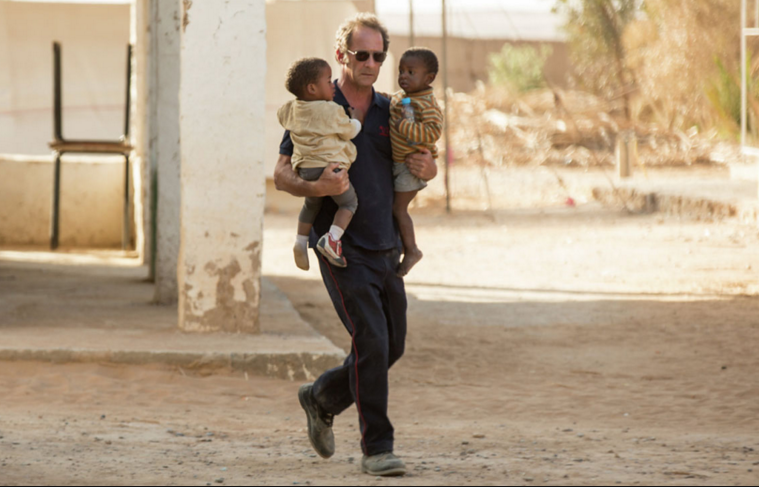 In pop-culture consciousness, non-governmental organizations usually crop up on the margins of stories. A granola college student will pay lip service to the heroism of Doctors Without Borders, or a character may boast about their time in the Peace Corps. Mainstream cinema has no idea how to tangle with the intimidating complexities of international aid work, and it mostly appears in documentaries or half-baked Oscar bait. And this makes sense, since addressing subject is itself confronting a first-world viewer with multiple levels of discomfort, even beyond the basic issue of depicting troubling situations in developing nations. No matter how well-intentioned they may be, aid workers are nonetheless meddlers, too often white people perceiving themselves as swooping to the rescue of helpless third-worlders. To boot, billions of dollars are wasted every year by NGOs which have little idea of how to actually help (also, corruption).

The White Knights dives headlong into the murky side of aid work without hesitation. The film is a dramatization of the Zoé’s Ark scandal, in which members of a French charity were arrested for attempting to fly over a hundred children out of Chad to France. Zoé’s Ark claimed to be transporting orphans of the conflict in Darfur for adoption, but many of the children were found to, in fact, be Chadian and have at least one parent still alive. In Belgian director Joachim Lafosse’s fictionalization, the “Move for Kids” organization, led by the unwaveringly resolute Jacques (Vincent Lindon), is planning a similar scheme in an unnamed African locale. The movie essentially plays out as a sort of heist thriller, with the plot turning on various potholes tossed in the road of Jacques’ plan, and a great deal of time devoted to working out the most minute logistics, such as constructing a ladder to get people onto a jet from a desert runway.

Along the way, a lot of dialogue is devoted to the ethics of this group’s actions, but the most potent moments are those straightforwardly observing their choices. Although the cinematography is at a still remove, these characters rarely miss a beat to vocalize conflicts which might have been better left to play out in audience members’ heads. The White Knights has a clear moral spine, but its verbosity obscures rather than reinforces the message.

The portrait of its protagonists is damning, and the title only reads as more sarcastic the longer it goes on. Move for Kids’ plan is tainted with deceit from the start: the workers ask villages for orphans under the auspices of housing and educating them in-country, never revealing that they will in fact be taken to France for adoption. The villagers don’t understand why anyone would only accept orphans for local aid, and the distrust and miscommunication between them and the foreigners only dominoes into more chaos. All the while, documentarian Françoise (Valérie Donzelli) observes the lies but never interferes, serving as a twisted parody of journalistic objectivity.

The moral myopia of the Move for Kids members never comes across as caricature. Rather, the series of small equivocations and self-justifications feel all too true to life. Lindon is particularly chilling, as Jacques’ true contempt for the people he’s supposedly dedicated to helping comes further into the light. The cast does a solid job of conveying their characters’ self-delusion, but it’s Bintou Rimtobaye as the group’s interpreter, the sole person to do the right thing as soon as possible, who delivers the best performance. Tellingly, she gets to speak less and react more, allowing her arc to play out entirely across her face. The White Knights would have benefited across the board if more of its script were in line with the way it handles her.

The White Knights screened at AFI Fest and is seeking U.S. distribution.