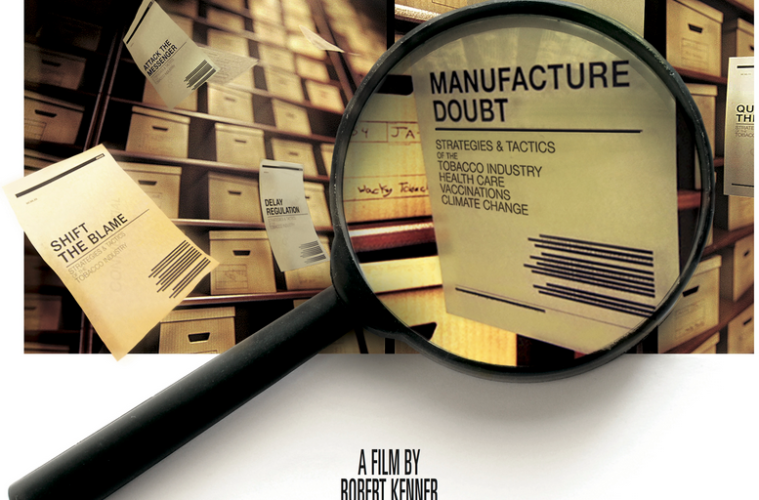 Climate change deniers say a lot of ridiculous things, but there’s one specific straw man argument they frequently fall back on that is so insulting in its ridiculousness, it’s unfathomable that anyone could buy into it. Even more upsetting than the crowds of people who burst into applause at the utterance of such statements is the confidence with which politicians and pundits relay such nonsense. The argument goes something like this: “It’s cold where I am, at this moment, so how can the temperature be rising?” Averages, apparently, are a mathematical fabrication.

While most are well aware that this is simply another tactical attempt to further sway masses already inclined to buy into an anti-environmentalist stance, statements like the above exemplify what Merchants of Doubt is actually concerned with. The latest documentary from Robert Kenner (Food, Inc.) isn’t simply designed to preach to the climate change choir – although there is unquestionably a healthy dose of that involved – but is instead a chronicling of the deceit tactics used by hired guns to convince the media-consuming public that doubt exists.

If the title didn’t tip its hand (pun intended) to Merchants of Doubt’s primary focus, a somewhat surprising opening sequence that places the audience inside Hollywood’s famed Magic Castle should certainly do the trick. While this “card trick” metaphor initially comes off as cheesy, it actually proves to be an effective point of entry for Kenner. In terms of presentation, Merchants is as engaging as one could have hoped for, balancing new and old interview segments – often using the same individuals who have been a part of the debate since the mid-1980s – as well as a variety of creative visual interludes that help break up the talking-head monotony. And, at a brief ninety-five minutes, the film never overstays its welcome. There’s nothing revelatory here in terms of documentary filmmaking, but there doesn’t need to be. What will be revelatory for many is the information that Kenner has synthesized. While some will certainly accuse the film of being one-sided, Merchants of Doubt posits the idea that there really is no debate; that only one side actually exists. Beginning with the tobacco industry in the 1950s, the film draws our attention to a small group of paid individuals responsible not for presenting any contradictory evidence, but whose job it is to distort, mislead, and scare the public into thinking the science on climate change is still in its infancy. The most telling revelation is the fact that some of the same individuals responsible for misleading with regards to tobacco – Fred Singer and Fred Seitz – also acted as paid advocates for the anti-global warming crowd.

And the funny thing is Merchants of Doubt isn’t even really one-sided at all. Present are interview segments with Singer and archival footage of Seitz, who passed away in 2008. Also involved in the film’s exploration are Bob Inglis, a former Republican Senator, and Michael Shermer, self-proclaimed Libertarian and founder of Skeptic magazine, both of whom were at one time skeptical of the truth behind climate change claims. One could accuse the film of presenting its opposing viewpoints with smugness and disdain, encouraging viewers to find humor in those opinions. Or perhaps the things being said are just inherently amusing.

Make no mistake, Merchants of Doubt has a strong point of view, one that becomes advocacy by the time the credits roll. But it’s the only point of view on climate change that is supported by scientific fact, and one that is thoughtfully and clearly furthered by Kenner’s direction. Only those who have already fallen prey to the deception will leave unconvinced.

Merchants of Doubt screened at AFI Fest and will be released on March 6th, 2015. See the trailer above.