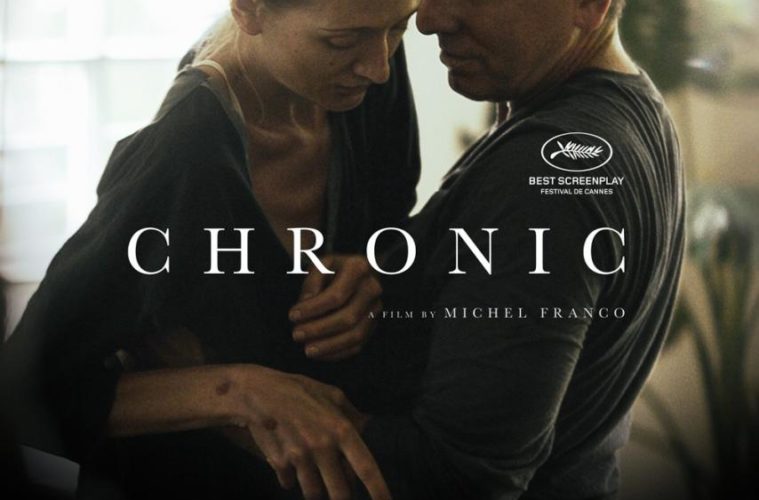 Michel Franco is careful. The writer/director doesn’t want to exploit sensitive, emotionally fraught topics through lurid attention to detail or an overwrought Oscar bait sensibility. Chronic deals with end-of-life care, something Americans are absolutely allergic to discussing seriously. Franco keeps a respectful distance from the physical indignity of terminal illness. This distance is literal — as patients retch horribly, lie wracked with pain, or have to let others bathe them, Yves Cape’s camera watches from the other end of a room or through an open doorway, almost always stock still. Close-ups are rare and non-diegetic music is nonexistent; nearly every overtly manipulative cinematic trick has not been invited. Franco leaves it to the actors to bring on the emotion.

Foremost among them are Tim Roth as David, a hospice nurse who routinely becomes too emotionally invested in his patients. He’ll take other nurses’ shifts for no extra pay, all to spend more time with his charges. Though this bites him badly — facilitating an elderly man’s use of porn causes one family to sue David for sexual harassment — he can’t seem to stop himself. David is addicted to helping the ill, and to those whom he helps. In one scene, he casually passes off a patient’s personal history as his own to a stranger. All the while, he attempts to reconnect with his estranged daughter (Sarah Sutherland).

Roth is engaged in this role in a way he hasn’t been in at least a decade. Physically, he becomes an avatar of gentleness and safety whenever David steps into his role as caretaker. He lifts, cleans, feeds, and assists people with a supernaturally effortless grace and unlimited patience. Everywhere else, David is a mess, and Roth makes himself disturbingly pathetic in a variety of ways, from his incidental identity theft, to his extraordinarily ill-advised attempt to reunite with a patient he’s been legally barred from seeing, to his painful inability to connect with his daughter.

Roth interacts well with Michael Cristofer and Robin Bartlett, who play David’s two primary patients in the story. But outside of their performances and Franco’s ever-tasteful approach to the subject matter, Chronic is frustrated either by convention or its own coldness. The need to “explain” David’s compulsions with a tragic backstory involving his son is unwelcome, and the subplot with his daughter is likewise a non-starter. Some scenes are so formally cautious that they become all but inert, particularly when David is interacting with the family of his patients. And what, if anything, the film is actually saying in regards to palliative care or the people who provide it is unclear. The ending, which pivots on an unexpected, unwelcome moment of violence, seems to suggest that it’s nothing more than “life is fragile.” Which is about as non-committal and unimaginative as one can get with this material.

Chronic screened at AFI Fest and opens on September 30.