Acasă, My Home Review: A Family Fights Conformity in the Bucharest Delta 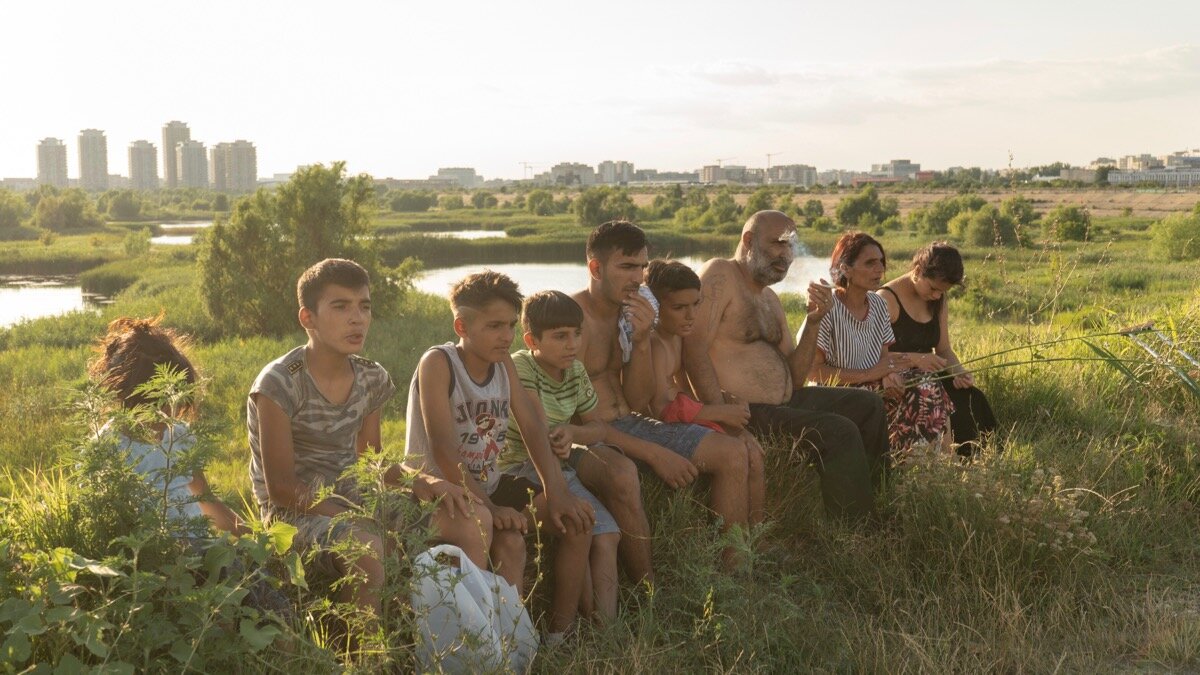 When encountering the societal and economic structures of everyday life, it’s not a rare dream for many to wonder what life may look like off the grid and out of the hands of a bureaucratic entity that doesn’t have your best interests in mind. For one family living in the vast water reservoir of the Bucharest Delta, they have made this their reality for the last eighteen years. The Enache family and their nine children call this abandoned area their home, sleeping in their homemade hut, fishing for food, and taking gentle care of this slice of nature directly outside the hectic Romanian capital. As outside interest in their homeland grows, Acasă, My Home director Radu Ciorniciuc captures the forces of civilization that cause an upheaval of their lives with a well-rounded eye, painting an empathetic, complex portrait of the costs of independence.

The vast Văcărești wetlands where the Enache family have carved out their home has been virtually untouched by the outside population for decades, but it’s in a moment of major transition. Led by a group of activists, it has now been classified as the largest urban nature park in EU––christened by none other than Prince Charles––and while officials proclaim they want to work with Enache family to preserve this land, it’s clear that such a proposition may only be considered after they confirm to the ways of modern life. It’s a journey of heartache––not only for a family who resists being uprooted from their daily way of life, but as the children grow, to see them confront the emotionally complex ramifications this upbringing has personally wrought.

With a background in investigative journalism, Ciorniciuc embedded himself into the family for years and it can’t be understated just how invisible his camera can feel. Lensed by the director along with Mircea Topoleanu, and winner of Sundance’s World Cinema Documentary Special Jury Award for Cinematography, Acasă has a poetic approach without ever feeling like this way of life is exoticized. Whether it’s showing the children galavanting through their natural habitat (both finding fresh fish for dinner and fleeing from social services) or observing heated conversations inside the family about their uncertain future, the perspective on display is an impartial one. Rather than attempting to deliver an obvious message, Ciorniciuc perpetually seems most preoccupied with equitably capturing all points of view. Even a drone shot, which already often feels derivative in documentary work, is used with startling impact to show just how close the Enache family is to the clutches of society.

With patriach Gică––previously a lab chemist assistant who moved off the grid because he “hated their wicked civilization”––being the film’s focal point, Ciorniciuc clearly has conflicted thoughts about his parental approach. We feel for him when the bureaucratic red tape crops up as his homeland is taken away from––not being able to plant or fish without official approval and guidance, even though he knows the area. His family is now pushed to survive by the only means they know, so when his children start swimming in the city river or try to interact with wildlife as they’ve always done, it’s initially a somewhat humorous sight. However, this incorrectly presumed freedom leads to illegal activities, causing familial strife and a reckoning with the way of life Gică and his spouse Niculina created for their children. The freedom these kids experienced is a rarity, and as they attempt to assimilate to a culture they were mere steps from experiencing their entire lives, the transition is one of a million nuances. Thankfully, Ciorniciuc doesn’t tie things up with easy answers as there simply aren’t any to be uncovered.

A fitting companion piece to the narrative drama of Captain Fantastic, Leave No Trace, and the perennially overlooked The Mosquito Coast, Ciorniciuc sensitively presents both the beauty and the bitterness that an upbringing in the wilderness can contain. With an immersive vérité touch, Acasă, My Home vividly captures living on the margins of society––whether it’s actually off the grid or being thrown into a system not of your choosing.

Acasă, My Home opens in Virtual Cinemas on Friday, January 15.