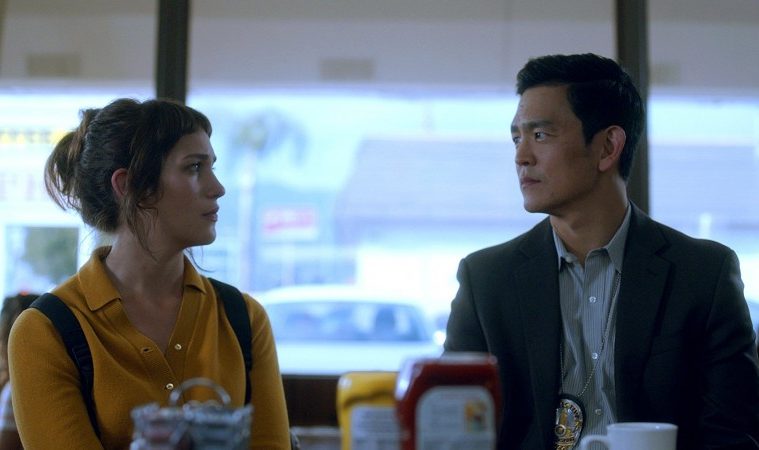 Aaron Katz and John Cho on ‘Gemini,’ Gun Violence, and Finding the Heart of Los Angeles

In Gemini, Aaron Katz weaves a neo-noir mystery so provocative that you wish it went on far longer than it does, and that is because as with all good mysteries, the suspects, alibis and investigation become much more fascinating than solving the case. In the film, Zoe Kazan plays Heather, a young, rebellious superstar who is shot dead in her mansion one night, leaving her personal assistant and best friend Jill (Lola Kirke) as the prime suspect. Jill easily slinks away from Detective Ahn’s (John Cho) sight, and a pursue ensues as they both try to find the culprit.

Using stylized cinematography and some truly inventive art direction, Gemini takes place in a Los Angeles of movie dreams, a tempting but slightly menacing location where sex, intrigue and deceit ooze from each turn. Gemini is also endless entertaining, as Katz gives into genre tropes which he manipulates to create a sense of dread and mystery. We spoke to the writer-director, and his star, Cho, about creating the moods of Gemini, and how a tale of gun violence lands differently in the current political era.

Can you talk a bit about the Los Angeles in Gemini? It’s clearly a movie L.A., not necessarily a very realist version of the city.

Aaron Katz: When I wrote the movie I’d been living in Los Angeles for two-and-a-half years. I was very new to the city, so I wanted to show that I was approaching the city from a place of curiosity and wanting to understand what the city was. John, how long have you lived in L.A.?

Aaron Katz: So for someone who knows the city that well, I wanted the film to feel like it represented the city well.

John Cho: I definitely felt that reading the script. You can see L.A. from any number of viewpoints, that’s what makes it so tough to pin down. There are cliché things about L.A. that are true though, like the vehicle fetish. Greta [Lee] was pregnant when we shot the movie, so we used vehicles to cover her tummy, which was so perfect. As an Angeleno watching something about L.A. I also saw me clocking the cars.

Aaron Katz: L.A. has a strange currency of fame and perception of ease. In the movie there’s a line Michelle Forbes’ character says, “I know we kind of hate each other, but I actually really like you.” That to me encompasses the philosophy of L.A. which is about all those other things, but also competence.

Were you trying to find “heart” in the city then?

Aaron Katz: Jill and Heather’s relationship has a lot of real love in it. It’s a complex relationship. I don’t think they’re pretending to like each other. I hope the movie has a lot of heart. I don’t want it to be a satire of Hollywood.

John Cho: There’s a whole Oz relationship with Heather and Jill, as to who is the one behind the curtain controlling everything. There’s also a difference in how people socialize in N.Y. and L.A. In N.Y. people do it in public. They meet in restaurants and bars, but in L.A., parties happen at people’s houses. Almost every party in L.A. feels like a business.

Real estate in N.Y. is also super small though, so it’d be tough to have as many parties in homes. This reminds me of your work in Columbus too, watching both movies made me realize you’re the guy to get…

No, for very architectural movies. Both movies have a very uniquely defined sense of place.

John Cho: That’s so interesting, I hadn’t thought about it but you’re right.

Aaron Katz: When you said architectural I thought about how one is literally about architecture, but in Gemini the architecture is such a key too.

John Cho: What I learned about architecture in Columbus was that instead of appreciating buildings like “this looks beautiful or magnificent” is to ask “how is this space making me feel?” Standing in some of these spaces I could think about what the architect wanted me to think by being in this space. They encourage different things too, depending on the space they have. Looking back at Gemini each of those spaces had data, and selecting locations for a movie is like building a stage.

Aaron Katz: The places really impact how the conversation feels. We’re in a swanky hotel right now, but we’d be talking differently if we were in an ancient barn. John, you revisited the diner from the movie recently, how was that experience?

John Cho: It was at 2 or 3PM so it was less inhabited. I particularly remembered Detective Ahn’s posture in that scene, which was about not wanting other people to hear what he was saying. It was always interesting to go back on location to see what was us and what was them.

Aaron Katz: When you walk on set you don’t see what the art department does, it’s just there. It’s interesting to see two movies with the same spot. Ingrid Goes West shot in the same tiki bar we shot in. We didn’t dress the set at all, but in Ingrid they put a lot of stuff that deemphasized the tiki aspect of it.

Detective Ahn is always one step behind Jill, what’s it like to play a character like that?

John Cho: [Laughs] You just take a scene at face value and try to stick to it.

You don’t get to decide when your films come out, but seeing Gemini in the aftermath of the recent school shootings, made me think of Jill as someone who figures she needs to take justice on her own hands, because no one else will. Has watching the movie and how the country reacts to gun violence different now?

Aaron Katz: Thinking about the gun violence aspect, I don’t think the movie is meant to be overly political in any way. But the act of violence in the film happens because there is a gun, what could have been something smaller becomes bigger. In that way I think the movie is a bit of a reflection of what’s possible when a gun is around. I didn’t grow up around guns, so there’s very little gun action in it, did you grow up around guns, John?

John Cho: I grew up in the church and when I was in junior high I was an awkward kid, so this couple who taught at Sunday school invited me for a sleepover and they were being very caring. I remember we had dinner, went to a movie and the next morning they took me to a shooting range where I used a pistol and a rifle for the first time. I think they were trying to teach me about personal responsibility and focus. I don’t even think they told my parents, which is weird in retrospect.

Aaron Katz: I don’t think I’d handled a gun before the one that was on set. It made me feel so nervous being around it.

John Cho: My dad told me he was a courier for the army in Korea. He was in a restaurant once and as a courier he was required to carry a pistol. Guns aren’t available to the public in Korea, and my father says there was a drunk man making a scene and he remembers being overwhelmed by the desire to use the gun to threaten him to shut up. He was so frightened by that feeling that he realized no one should have guns. Because, what if?

Gemini is now in theaters.