‘3 From Hell’ Review: Rob Zombie Shows the Carnage of an America Let Loose 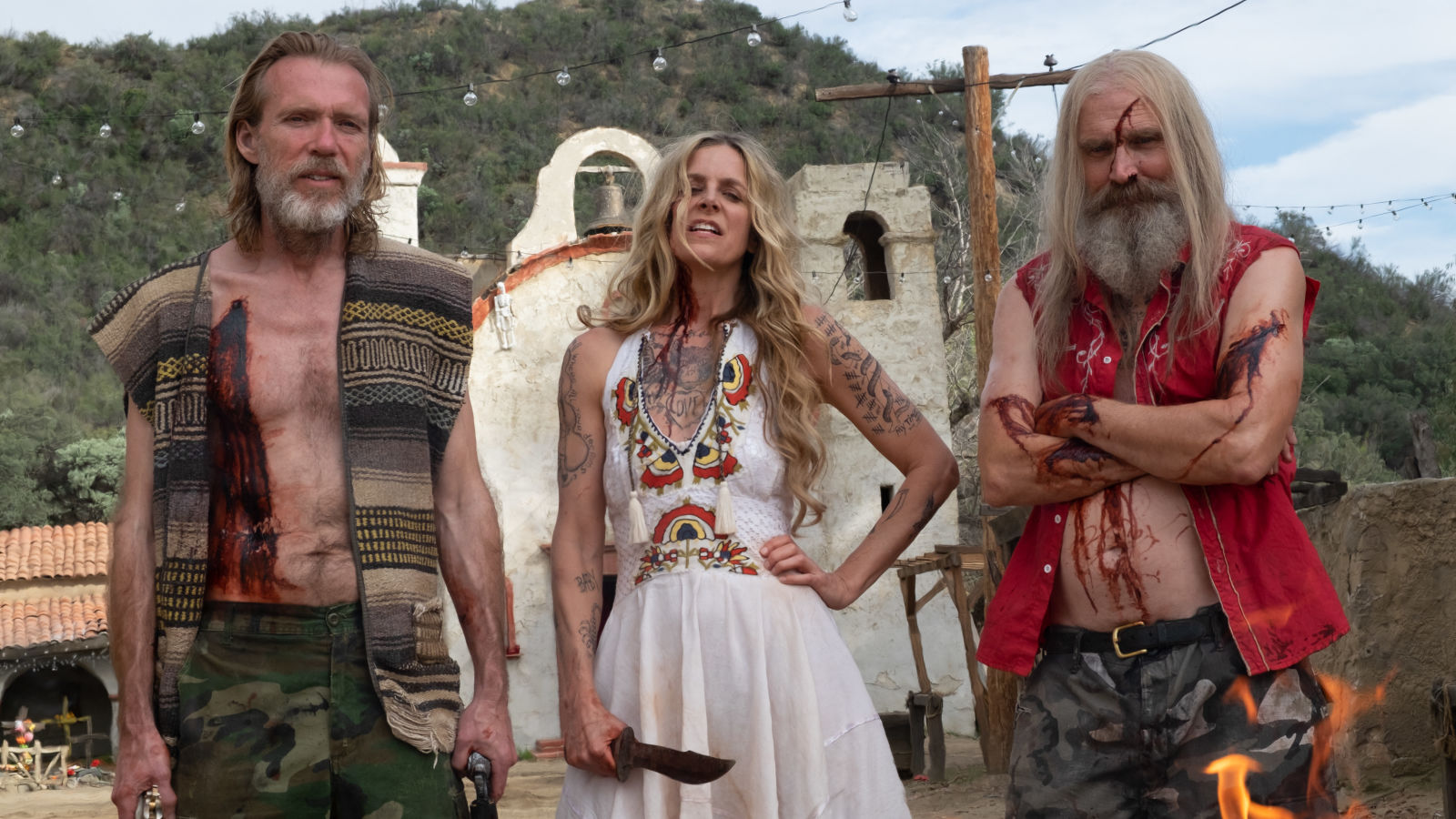 After more than a decade, writer-director Rob Zombie returns to finish his sadistic Firefly Family Trilogy, reanimating their spree of murder and mayhem after House of 1000 Corpses (2003) and The Devil’s Rejects (2005), where they met a bloody end. Now, having miraculously survived their mosaic of bullets on a desert highway, Otis (Bill Mosley) and Baby (Sherri Moon Zombie), along with half-brother Foxy Coltrane (Richard Brake), are engineering a brand new speedway to murder city in 3 From Hell.

The film starts off with a total envelopment of media frenzy: media as fear-mongering, media as bloodlust; media creating obsession, media creating our narrative. It’s kinda drab, it’s kinda rad, we all tune in. What we find is that, since they’ve been gunned down (but survived), the Rejects have become a media sensation. Not unlike Bundy or Manson, the Firefly Family have gained further infamy, which means they’ve also gained supporters and lustful admirers while they weave between courtrooms and prison cells. We love a good drama, we hate The Man, so free the three!

It’s fascinating and gleeful the way Zombie contrasts a media buzz against the real deal. No, of course, Baby isn’t actually innocent. Yes, the trio are barbaric killers, armed and extremely dangerous! But we also see them share jokes and talk about what all this shit means if your loved ones die and your body fails you. Zombie has always made incendiary cinema. He digs knives deep under skin and wrings trauma and contradiction from the sweaty, tattered rags of Americana with white-knuckle conviction.

Like Rejects, he positions 3 From Hell within revisionist Western iconography, dragging any sense of morality across split concrete and dirt until it pukes and dies in the hot sun. There is an almost casual way in which a peeled-off face is shown hung from the stump of a tree; like an intentional afterthought. Because normal is all warped in this world. Here’s a film where a heartfelt family conversation is about convincing a sibling not to die and instead keep on killin’, baby.

Zombie perfectly conveys the joy of carnage for the Firefly Family, who refuse to live any way other than wild and free. It’s infectious, even as it’s sickening. Because he also portrays the innate horror of this America, like how he manages to always remember the victims whose lives are cut short on the ride. It creates a textured film, whose amorphous morals kaleidoscope hypnotically with the film’s progression. It’s part torture chamber, part hangout picture, part Bring Me The Head of Those Three Crooked Murderers.

Here, the hallucinatory quality of Zombie’s most phantasmagorical films, such as Halloween II (2009) and The Lords of Salem (2012), are paired with the sweat, stink, and bad-mouthing of his most confrontational, aggressive works. Namely, 31 (2016) and Rejects. This unholy union is seen visually when, for example, Zombie cuts between a blade being jerked around a fresh corpse and an image of Jesus in a strobing church, adorned in sickly colors. Or when we get a rare glimpse into the mind of Baby while she lays in a prison cell, lost in her own psychosis.

This combination is also felt in 3 From Hell’s editing, which finds Zombie and frequent collaborator Glenn Garland experimenting with collage, intercutting, and rapid snippets to nauseating effect. The duo continue rough and jarring techniques they’ve used before to great impact, deploying freeze frames, swipes, and sudden zooms. This approach gives a jagged rhythm and quality, recalling the textured and messy cinema of a bygone era which Zombie so loves, and, above all, they seem to denote a confrontational approach to cinema when coupled with Zombie’s image-making. These aestheticized transitions feel tied to the anger with which Zombie has been producing films, notably since 31, but traced all the way back to Corpses and especially Rejects. It’s a kind of undercutting to the sleek and the polished that screams fuck you, while still delivering the goods.

Zombie’s pastiche of his differing styles is felt, too, in the images themselves, which feel both arresting and repulsive. The cinematography is often sun-soaked, but not in the glamorous, Instagram hues of vacation. This is the kind of heat that makes you sweat, dries out your mouth, and lifts a stink from the soil that reminds you how this whole place was built up from a pile of corpses and bloodshed and misdeeds and goddamn American mania. And now that stink and all those acts are all sewn into the very skin of America today.

With 3 From Hell, Zombie is intent on ripping out those sutures, grabbing a hold of the blistered flaps made from that fresh incision, and waving a grisly tapestry that may as well have the red, white, and blue colored on the leathery skin of every casualty we’ve taken to make this country great. This is America let loose, with our violence, trauma, and psychopathy sweeping south of the border in a deluge, our arbiters wearing the indigenous garb of those we’ve already slaughtered to make bedrock.

Make no mistake: under the random, drifting, conversational varnish is rot. 3 From Hell is uncompromising, unsafe cinema. You’ve been warned.

3 From Hell plays in select theaters this week and hits Blu-ray/DVD on October 15.