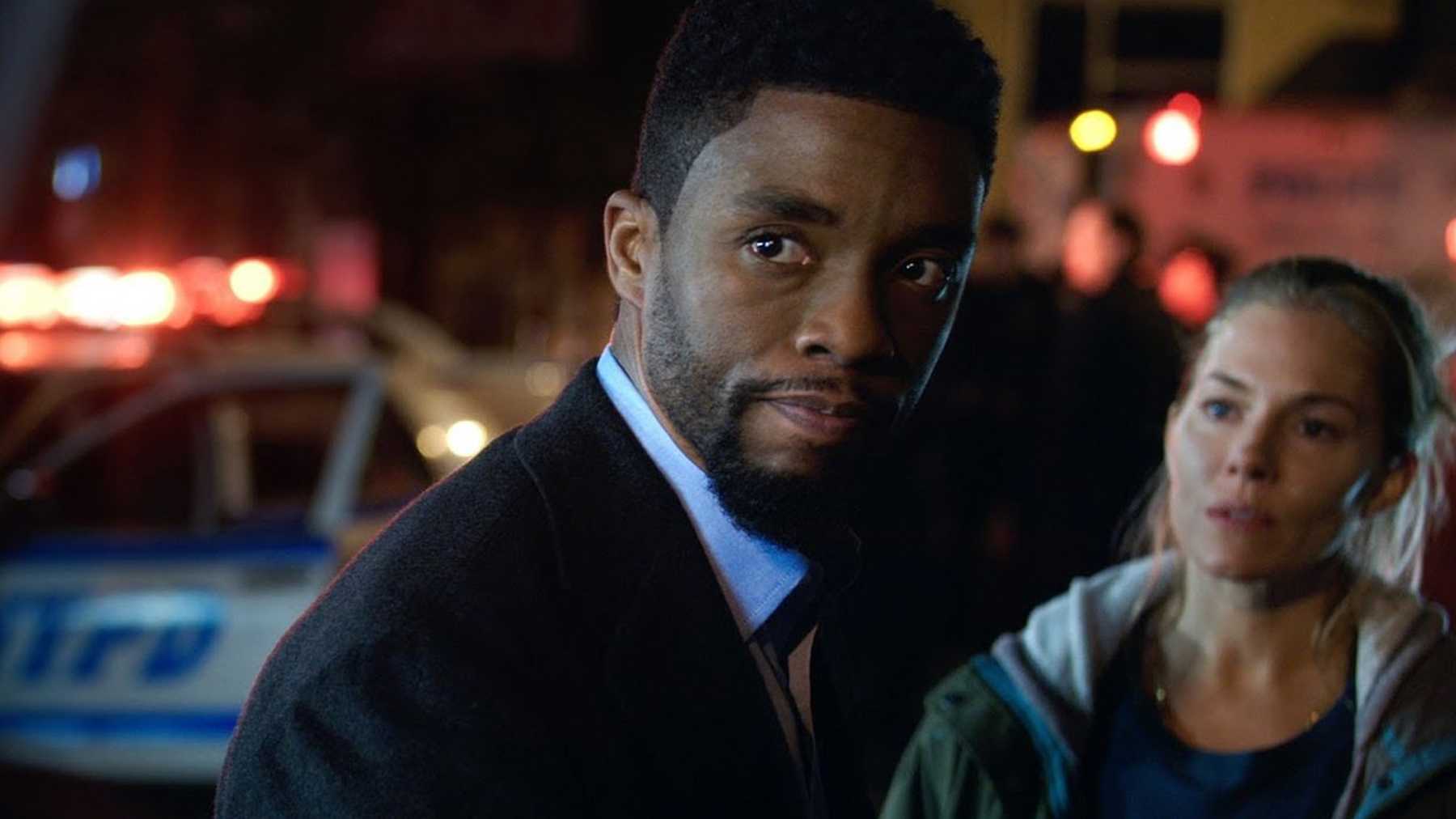 Once upon a time, a movie like 21 Bridges was known as a “programmer” for the bigger film studios. A thriller with an established star at the center and a digestible runtime, released in between tentpoles to generate some solid, if not stratospheric, box office receipts. Not surprisingly, this kind of mid-budget project barely exists on the big screen anymore. And what a shame.

Directed by television veteran Brian Kirk, 21 Bridges follows brooding detective Andre Davis (Chadwick Boseman) as he shuts down the island of Manhattan (including the bridges!) in the wee small hours of the morning to hunt a pair of cop-killing thieves. One of them is a tactical kill machine (Taylor Kitsch), while the other (Stephan James) is too smart to be in this position. As the chase burns on towards sunrise, the plot thickens. Soon, Davis is not sure who of his brothers and sisters in blue he can trust. J.K. Simmons shows up for some reliable work, while Sienna Miller puts in time and a heavy New York accent as Davis’ Narc partner for the night.

Coming in at a lean 99 minutes long, Kirk packs a lot into the runtime. Aside from an opening scene from Davis’ past, the narrative takes place in roughly 12 hours, opening with a robbery-gone-wrong and ending with an efficient shootout. Peppered throughout is a savvy do-lop of social commentary. Credit this to the screenplay from Adam Mervis and Matthew Michael Carnahan. The initial good cops versus bad robbers archetype is painted gray fairly early on, each plot reveal offering an intelligent take on power and circumstance. A pointed, if unconvincing, monologue by the film’s ultimate villain underlines the point.

There are few better to lead this kind of middle-brow B-movie than Boseman, a young movie star who’s split his time playing real-life heroes (Jackie Robinson, James Brown, Thurgood Marshall) and a superhero (you know the one). It’s refreshing to see him here, sporting a good-looking coat and a stoic swagger. His Detective Davis is both the smartest and most compassionate guy in the room. Faced with an increasingly impossible situation, Boseman paints a portrait of a perfect civil servant; one who can acknowledge that two opposing facts can be true at the same time. He will not rush to judgment, but also never seems unsure.

Politically, 21 Bridges skates between sides of the aisle with some precision while never slowing the pace. Blue lives matter of course, but so do the lives of all those they are serving to protect. One can see why so many talented people wanted to be involved with this project. This is a thinking man’s popcorn flick, and a relic at that. The odd piece of wooden dialogue, stilted master shot, and expository scene can be forgiven in favor of solid entertainment and a worthwhile conversation on the way home.

If the future of these pictures is to be exclusively on Netflix or Apple or the next streaming service, so be it. As long as they keep being made, and made at this high level.

21 Bridges is now in wide release.