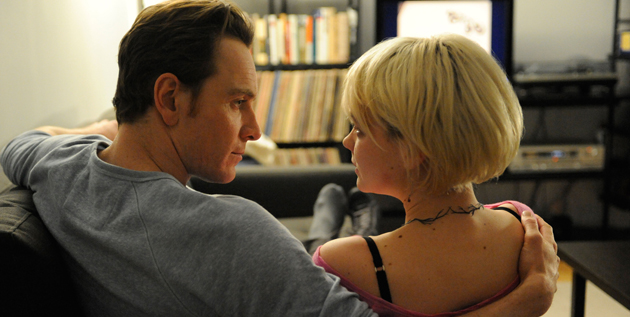 Will Full Frontal Nudity From Michael Fassbender and Carey Mulligan Guarantee a NC-17 Rating For ‘Shame’? Update: Read our TIFF review of Shame here and it has officially been given an NC-17 rating for “some explicit sexual content.”

One of the most talked-about stories in last year’s Oscar race was Blue Valentine and its NC-17 rating. The Ryan Gosling-Michelle Williams Sundance drama was picked up by The Weinstein Company and then garnered the nefarious rating for a brief scene of oral sex. After Harvey Weinstein himself appealed to the MPAA, the rating was finally overturned in time for distribution. Films slapped with the rating often only receive a small portion of theaters picking it up, or even worse, they head straight to home release and skip a theatrical run altogether. A certain film premiering at Venice and showing at the Telluride, Toronto, and New York Film Festivals may be headed for the same troubles. Steve McQueen‘s Hunger follow-up Shame sees a re-team with his star Michael Fassender, who plays a sex-addicted man living in New York City. If you’ve seen Hunger, then you wouldn’t be surprised to learn that McQueen pushes his characters to the absolute brink of their situation here, as early festival reviews for Shame suggest. An early January 2012 bow is already set for the UK, and while the film has yet to receive US distribution, expect someone to come aboard in a matter of weeks. But will the explicit drama be able to dodge the MPAA or perish in a a handful of coastal theaters?

On the other hand, FirstShowing‘s Alex Billington is more optimistic about its chances, saying even with “full-front male nudity” from Michael Fassbender and the same exposure from Carey Mulligan, that the “tastefully” done film could still receive a “very, very edgy” R-rating. The “steamy sex scenes throughout” are comparable to other R-rated films and he reminds us that comedies like Forgetting Sarah Marshall and Walk Hard each feature full-frontal male nudity. Where these comedies have nudity, let’s not forget dramas have a much harder time in front of the MPAA. He adds, “it’s not at all pornography, it’s very refined filmmaking and it’s never excessive, always in service of the story.” Blue Valentine falls into the same category, so depending on who picks up the film (Weinsteins, anyone?) it is possible we could see a similar back-and-forth appeal battle with the MPAA. IFC Films picked up McQueen’s Hunger in 2008 and if they bid to work with the filmmaker again, I could see the sex-addiction drama going the unrated route, like some of their releases — Enter the Void did this last year, Antichrist in 2009. While it wouldn’t get the desired theatrical run, this method could serve to potentially reach a bigger audience then a crippled NC-17 release.

One thing is for certain: Like Valentine‘s Derek Cianfrance, I can’t see McQueen allowing a single cut of his film in order to appease a ratings board. With MPAA’s clear bias when it comes to censoring sexuality over violence, it could be a difficult road ahead for the film. Expect a US distributor to come aboard, quite possibly in the large Toronto market, and check back for our reviews from that fest, as well as the New York Film Festival. In the meantime, check out the cast and crew talking about the film below at the Venice Film Festival, followed by the first clip from Shame (begins at the 2:30 mark).

Do you think an NC-17 rating is certain for Shame, or does it have a chance at getting a pass from the MPAA?