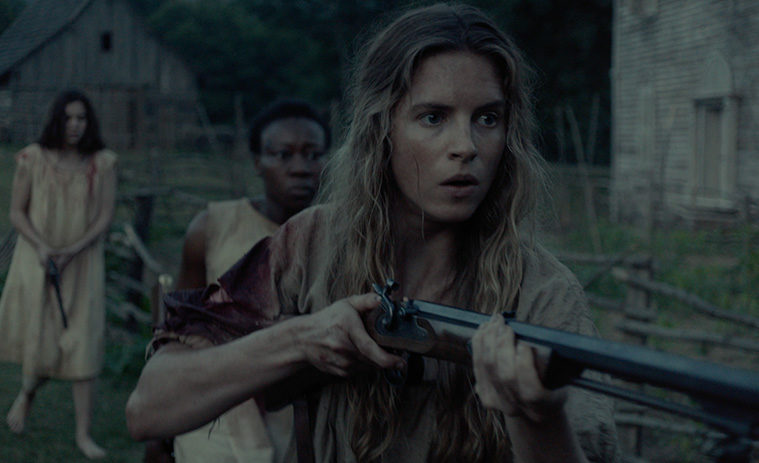 As is the case every year, TIFF is showcasing a diverse range of films this week, and Daniel Barber’s The Keeping Room adds to the variety as a female-centered, Civil War-set drama. With its world premiere on Monday night, an exclusive clip from the drama has been released featuring our three women at the center, Brit Marling, Hailee Steinfeld, and Muna Otaru. Following the last days of the war, the trio find themselves victim to two Yankees (Sam Worthington and Kyle Soller) terrorizing the area.

While those actors aren’t in this first footage, one can see the first conflict erupt between the three women, thanks to Deadline. The clash makes the ensuing drama evident, demonstrating the strong personalities of both Augustana (Marling) and the family slave Mad (Otaru). As Augustana’s sister, Louise (Steinfeld), lays bloodied in the tree line, we see potential for violence and substantial collision. Needless to say, the dynamic between the three female characters looks incredibly intriguing.

Check out the TIFF exclusive clip for the film written by Julia Hart, with her screenplay landing on the 2012 Black List, and directed by Daniel Barber (Harry Brown).

In most films, women’s view of war has been restricted to the home front rather than the front lines. Julia Hart’s screenplay The Keeping Room, a bold corrective to this long history of omission, landed on Hollywood’s prestigious Black List in 2012; now, director Daniel Barber — whose previous film Harry Brown screened at the 2009 Festival — has realized Hart’s remarkable script as a film of stunning power.

In rural South Carolina in the final days of the American Civil War, Augusta (Brit Marling), her teenaged sister Louise (Hailee Steinfeld), and their young slave Mad (Muna Otaru) have been left to maintain the family farm on their own. With all of the men — fathers, brothers, farmhands — long since departed for the battlefield and now presumed missing or dead, the three women harbour fears about the future, unaware that a greater peril is much closer at hand. When an illness sends Augusta to a nearby town in search of medicine, she finds a welter of death and terror wrought by two Yankee scouts (Sam Worthington and Kyle Soller), who have embarked upon some private pillaging in advance of the approaching Union Army. Though Augusta manages to escape their clutches, the renegades track her back to the farm. The ensuing battle between the young women and their assailants is fierce, furious, and unpredictable.

Hart’s scenario brilliantly uses this tale of survival to capture a transitional moment in history. As Augusta, Louise, and Mad combat the merciless marauders, their struggle takes place in the context of larger changes: the end of slavery, the end of an agrarian economy, and an end to these women’s reliance on men for their safety and well-being.

The Keeping Room premieres at TIFF and is seeking U.S. distribution.