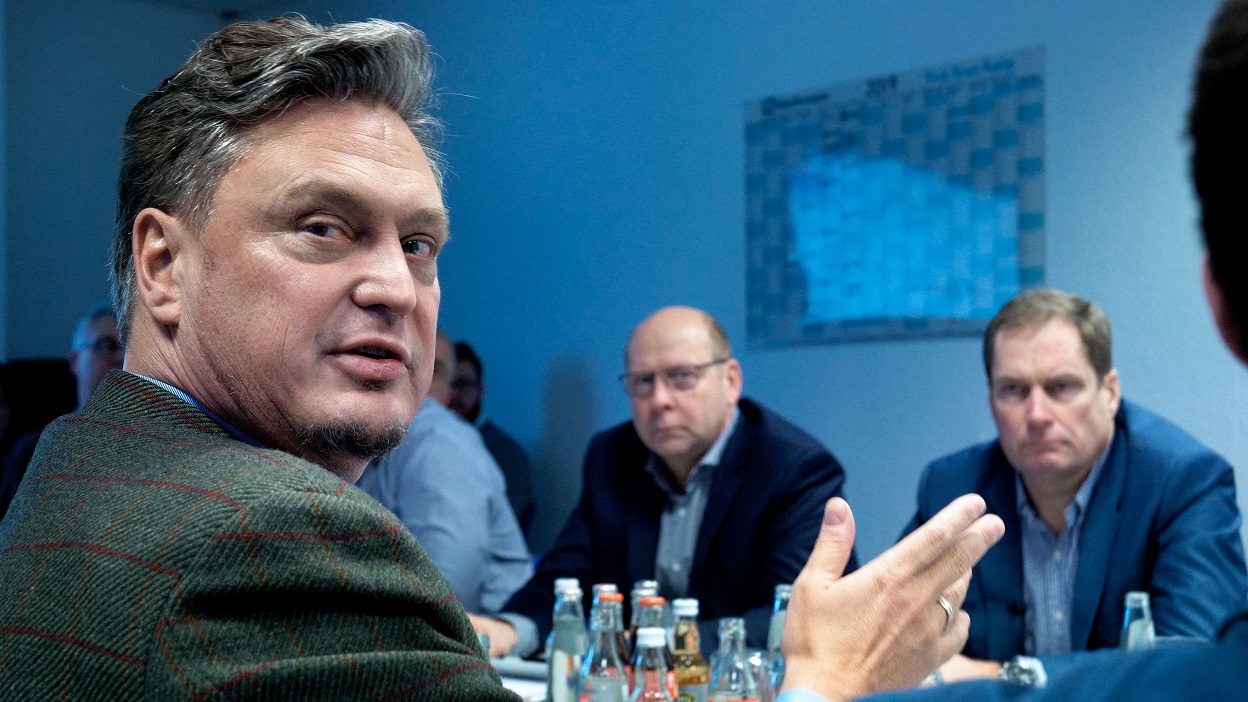 If the title of Simon Brückner’s new documentary conjures images of Bavarian beer halls or seedy nights at Kit Kat, don’t get your hopes up. There is an ample amount of beer in A German Party, and even the occasional modest beer hall, but the lasting effect of Brückner’s film is far more sobering. A German Party is documentary as political procedural: engrossing, depressingly comic, and never less than concerning, it charts two years in the political ecosystem of the Alternative für Deutschland, a fringe party with a stronghold in the former East that shook the nation in 2017 when it picked up 97 seats in the General election—or roughly 13% of the vote.

Though the task is as tricky as it is counterproductive, Brückner makes efforts to appear objective—his film is impressively non-preachy, even if you feel next to no one on the right will be watching—but its sheer existence suggests something of a Trojan horse. What made that 2017 result so shocking was the AfD’s politics: staunchly right-wing with a populist anti-immigrant agenda, and infamous for operating in the grey area between nationalism and xenophobia. “People can practice whatever religion they want,” a particularly goblin-like older party member says at one point, “they just have to go back where they came from to do it.” The party was formed in 2013, only rising to prominence in the aftermath of Merkel’s 2015 decision to accept 1 million refugees into Germany. For many disenfranchised people in the former Soviet East who felt overlooked since reunification, it was a straw that broke the camel’s back.

Shooting regularly from 2019 to the beginning of this year, Brückner tracks the party’s attempts to build on and consolidate that success. He casts his net wide, covering grassroots groups and door-to-door canvassers all the way up to a party debate on COVID restrictions (the majority are of course against) and a meeting in the Reichstag. The subjects range from the earnest to the deluded to the downright fascistic. In one confounding moment Brückner follows a younger party member’s trip to Bosnia where he naively hopes to cut off the flow of refugees coming through. In another section he focuses on their relatively moderate parliamentary leader, Georg Pazderski, and his attempt at reelection against an extremist opponent. He follows the “green” agenda of one politician who wishes to remove wind farms and have nuclear power reinstated so that more trees can be planted. Another member predicts that once neighboring countries elect populist parties of their own, it’s only a matter of time before Germany follows suit. (The right-wing French presidential nominee Marine Le Pen was solidly in the running when I watched the film in April and eventually only lost by a narrow margin.)

Though his presence is felt, Brückner seldom intervenes. This approach is strictly fly-on-the wall, with an aesthetic recalling Frederick Wiseman. Whether the implied objectivity of that approach is problematic is the question lingering at the centre of A German Party: has there been a trade-off of access for “platforming”? Is that ok? It’s not exactly “good guys on both sides,” but there is some Arendt in here; even a touch of Renoir’s “everyone has his reasons.” Reunification left a bitter taste in the mouth of many East Germans who saw their young people leave to the West en masse. It’s widely believed that many feel looked down on as backward and uneducated by their western compatriots. This history is worth exploring, yet something Brückner seems curiously uninterested in.

It isn’t too much to suggest the AfD’s success broke something in Germany. The country’s self-image in the Merkel years was as the EU’s de facto moral compass, a place where the majority couldn’t fathom the thought of a far-right party taking any sort of power (surely not again). A German Party captures that uncertainty, that deep fracture, as well as the giddy, warped optimism of these disruptors. And Brückner isn’t afraid of looking to the future: his most interesting case study is of a younger politician, Aaron, of the Junge Alternative: clean cut, ambitious, and as indoctrinated as they come.

The arc builds toward the 2021 election, but Brückner’s penultimate moment sticks longer in the memory: Aaron and an even younger colleague are filmed drinking beer on a perch overlooking a small town in the northwest of the country. The buildings lay in ruins, destroyed by the unprecedented flooding that wreaked havoc in the region last summer. Sun-kissed and slightly buzzed on alcohol and youthful arrogance, Aaron takes a deep breath and observes the wreckage below with all the chilling conviction of someone who believes they will do the rebuilding.