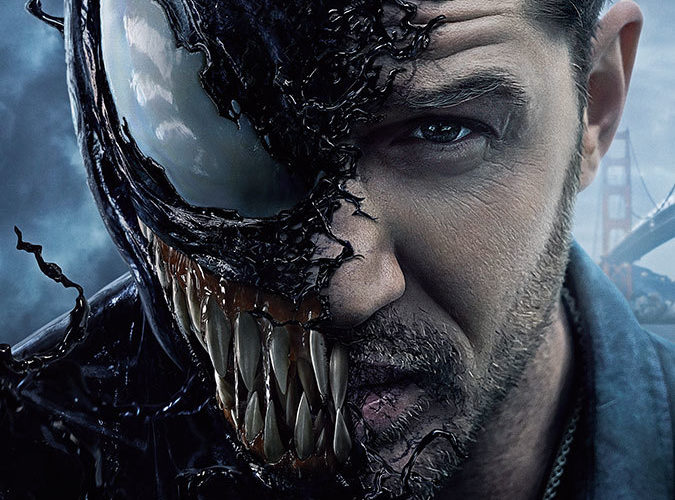 The Marvel title sequence—red comic book pages flipping at high speed to reveal a corporate logo whose cultural saturation is on par with the Golden Arches—comes with the unspoken promise of studio-approved, franchise-productive spectacle. Though the canonized Cinematic Universe films run the gamut in terms of quality, their slick feeling of uniformity might be the series’ lasting legacy. It is responsible for their worldwide financial success, cultural omnipresence, and stunted creative output. The films must stay the same in order to thrive. The entertainment might be familiar and formulaic (or present slight variations on the familiar and formulaic), and it might be so thoroughly crafted by committee that it looks more like a camel than a movie, but by God, it will be entertainment, even if you’re not having fun.

So does the fact that Venom opens with the de rigueur title sequence except with an “In Association With” tag attached to the Marvel logo mean anything other than a cheap laugh and a contractual requirement? Does an “In Association With Marvel” film differ in any meaningful way than a regular ol’ Marvel film? After all, these one-shot, non-franchise superhero films theoretically have the possibility to evince some new aesthetic impulses and maybe, just maybe, even a different storytelling model. Despite the financial imperatives these films must meet, the boardroom masters they must serve, and the IP fanatics they must placate, the original source materials remain fluid enough to allow for new visions. In spite of most everything we’ve seen, they still have the potential to be something else.

To get the dispiritingly predictable revelation out of the way, Venom is not an alternative to anything. Sony’s opening salvo in their distinct Marvel universe is yet another origin film, and director Ruben Fleischer plus screenwriters Jeff Pinkner, Scott Rosenberg, and Kelly Marcel hit every standard origin story beat with compulsory, half-hearted energy. The labored, yet sloppy plot doesn’t really warrant a fuller explication. You’ve seen the transformation of Eddie Brock (Tom Hardy, whom I’ll get to later) from Vice-like investigative reporter (who at one point holds a notebook unconvincingly and claims “homelessness is only increasing” in an embarrassingly slapdash montage) to the half-human, half-symbiote (read: alien) Venom a hundred times before. Both the Elon Musk-inspired villain (Riz Ahmed) and his sinister machinations are lame. The primary and secondary female leads (Michelle Williams and Jenny Slate) desperately try to elevate thankless roles, but the roles remain thankless. The visual effects are an eyesore, especially during a car chase sequence that feels like it’s held together by duct tape and gum. Casual mass destruction and death populate the background. The third act is as bad as almost every third act in a Marvel superhero film from the last decade, only this time with even more sloppy editing. In other words, it’s a run-of-the-mill superhero movie. Whadya need, a road map?

While the architecture of Venom remains frustratingly consistent with the dominant model, I’d be remiss to say there aren’t pleasures within the framework, albeit ones that might be entirely unintentional. To describe Venom as “tonally confused” doesn’t really convey the fractured, directionless feeling the film embodies. Every actor plays their part as if they’re in a different film than everyone else on screen. The script projects a veneer of agro darkness, and yet much of it teeters on the edge of camp hijinks. There’s plenty of comedy, though little of it comes from the planned jokes and much of it from the messy, borderline-incompetence exhibited on screen, but a joke is still a joke even if it is toeing a razor-thin line between deliberate and accidental humor. As others have pointed out, Venom feels transported from the mid-00s during the post-Spider-Man, pre-MCU period of superhero films, in which the primary directive seemed to be foregrounding the title character and figuring everything else out later. There’s charm to that approach, even if it’s intermittent, especially when you’re otherwise immersed in homogeneity.

Then there’s Tom Hardy, who, rest assured, is solely responsible for the halfway watchability of Venom. It’s a cliché to praise a film by saying that an actor “is having fun” on screen, but Hardy having fun with a weirdly bland character and his absurd, sassy alter ego goes a long way to giving Venom a reason to exist. With his off-kilter energy, nebulous American accent, and one-loose-marble-in-his-mouth delivery, Hardy livens up scenes just by making casually unusual performance choices. The pre-Venom scenes with Eddie Brock are fascinating only because watching Hardy try to play “normal” feels like cognitive dissonance in action. He operates in a completely different register than his screen partners and it always feels like he’s seconds away from just buzzing out of the frame.

While his Venom voiceover only amuses because of the voice modulation, which sounds like a deeper Bale Batman, both Hardy and the film excels whenever he plays possessed. Hardly represses his off-the-wall spirit, but when Venom enters his body, he adopts the behavior and actions of Looney Tunes’ Tasmanian Devil, a whirlwind of insatiable hunger and mania. Venom’s standout sequence involves Hardy having a full-blown breakdown in a fancy restaurant that concludes with him sitting in a tank eating live lobsters. Earlier this week, Hardy gave an interview where he mentioned that his favorite Venom scenes comprise of 30 to 40 minutes of material cut out of the finished film. That might sound like a ridiculous throwaway anecdote, but having seen the film, it’s very easy to imagine many digressive scenes of Hardy freaking out in public under the influence of the mischievous symbiote. In a parallel universe where mainstream, big-budget films didn’t require point-A-to-point-B plotting, Venom would be a Cronenbergian affair that solely consisted of Hardy contending with his fractured mental state and rapidly changing body.

It’s unfortunate that the actual Venom character feels so thin and corny. His power relies on the voice and his Halloween mask of a face, both of which only frighten in theory but hardly ever in practice. Venom’s script wants Venom to function as a monstrous savage and comic relief, which is fine, but neither the script nor Hardy can manage both tones. Whenever Venom cracks wise, it scans as a sub-teenage wit, and whenever he tries to scare, it fails because the production team mistakes “gross” for “terrifying” (see also PG-13 limitations), and it’s wholly unconvincing whenever the script requires the character to jump between the two modes. There are flashes of a different kind of Venom, one that vacillates between ego and id, offering clarifying commentary in between rampages, which could have been an interesting foil to Hardy. Instead, he’s just a parasitic alien with a badass ’tude who helps Eddie save the world from a poorly conceived global threat. That might be what The People want, but after two hours of misshaped plotting edited with assistance of a butcher knife, they might just crave those cut scenes of Hardy weirdness that Venom desperately tries to restrain.