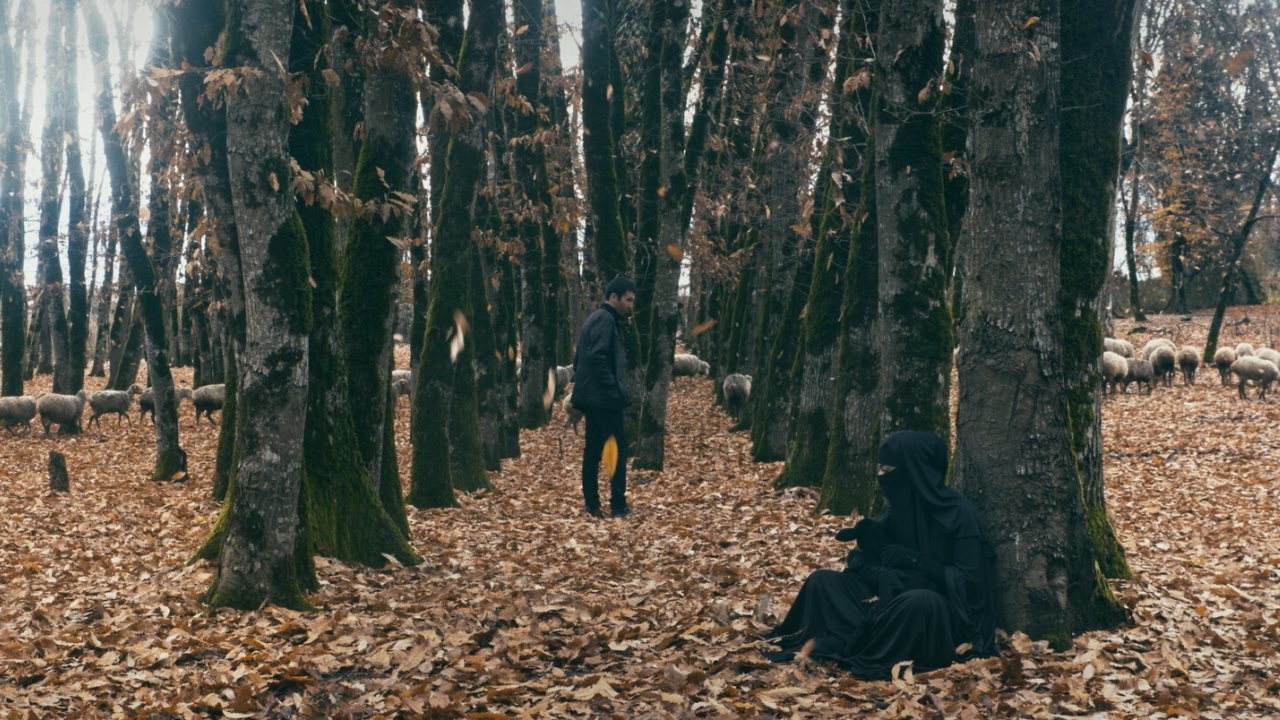 In the new Azerbaijani film In Between Dying, a man goes on the run after shooting a low-end criminal. Over the course of a day, he encounters a number of women who have been beset by various miseries. In flashback, we meet what might be his wife and son. He says he is trying to find them.

The film is by Hilal Baydarov, a 33-year-old director who comes with no shortage of clout. It is an attractive story: Born in Baku in 1987, Baydarov twice won the national mathematics award while still in school before earning an M.A. in computer science. More stable and lucrative paths surely awaited but while in university he saw Krzysztof Kieślowski’s The Double Life of Veronique and decided to become a filmmaker. He was accepted into the Sarajevo Film Academy where he studied under Béla Tarr and, since 2018, has released a whopping six movies––one narrative and five documentaries, including an acclaimed trilogy focusing on rural life in Katech. Filmmakers have arisen under less auspicious circumstances.

And so to Baydarov’s new one, just his second narrative film, which premiered in competition in Venice. It was produced by the Mexican filmmaker Carlos Reygadas and carries the endorsement of Romanian director Cristian Mungiu, both of whom Baydarov met while studying in Sarajevo (it was under Mungiu’s advice that Baydarov moved to documentaries). Are we to expect a certain filmmaking style from someone associated with such lofty names? Surely not. (Tarr’s curriculum, if anything, is best known for its eccentricities: woodland meditations with Apichatpong; football with Gael Garcia Bernal; that sort of thing.)

Baydarov, nonetheless, hasn’t fallen too far from this tree. In both aesthetic and form, In Between Dying is about as dense and somnambulant as a melting ice cap––and about as bleak as one, too. Orkhan Iskandarli plays Davud, a man who can’t stop encountering death. The first fatality, the original sin perhaps, comes by Davud’s own hand, felling what might be a dealer in a graveyard. The ones that follow do not––although the director suggests they could be echoes (“Death follows him,” a woman will later say). This sense of the theological, the idea of being trapped or followed by ones own sins, has a ripple of Bresson to it (a filmmaker Baydarov greatly admires) albeit with none of the earnest catharsis or distilled style of the Frenchman’s films.

In Between Dying is split into chapters and Baydarov continuously cuts from the main arc to flashbacks of Davud and his wife—an evocatively shot but ultimately tiresome diversion. There is also a group of tough guys on Davud’s tail who act as a kind of chorus line, offering ruminations on the strangeness of Davud and his story. And Dying holds greater intentions still: Baydarov has his beleaguered protagonist run into series of far more greatly beleaguered women––one suffering from domestic abuse (“looking at the road is my escape”); one “rabid” and chained up; another fleeing from an arranged marriage. The righteous message of the film is thus revealed as one of grief and patriarchal guilt. Later we see Davud helping a stranger to bury their mother, who is naked and still very much alive. It is the film’s best moment, whatever it means.

Iskandarli acted in Baydarov’s debut but is more or less a non-professional actor in a non-professional cast in a movie where performances matter less, perhaps, than mood and imagery. Cinematographer Elshan Abbasov captures most sequences in static medium shot, like little painterly dioramas––and I would trade whole scenes of Baydarov’s melancholy dialogue for a few more minutes of Davud riding around the rolling hills of Baku on his moped. The few close-ups Baydarov allows are such an exception to this rule that they come as not just a visual shock but an emotional one. It is this scarcity of real palpable emotion that proves to be the film’s undoing. When every moment is bleak and poetic and loaded, in the end, it can feel like none of them are.

One of Baydarov’s early documentaries was titled Mother and Son, a sidelong reference to the Aleksander Sukorov film of the same name. One need not look too closely to see the Russian master’s influence here: Baydarov’s world is stark and classical in that very Sukurov way, and there are some moments when his artistry reaches for similarly poetic heights. Reygadas has called Baydarov’s style of filmmaking an endangered species. Maybe it is not entirely difficult to see why.

In Between Dying premiered at the Venice Film Festival.