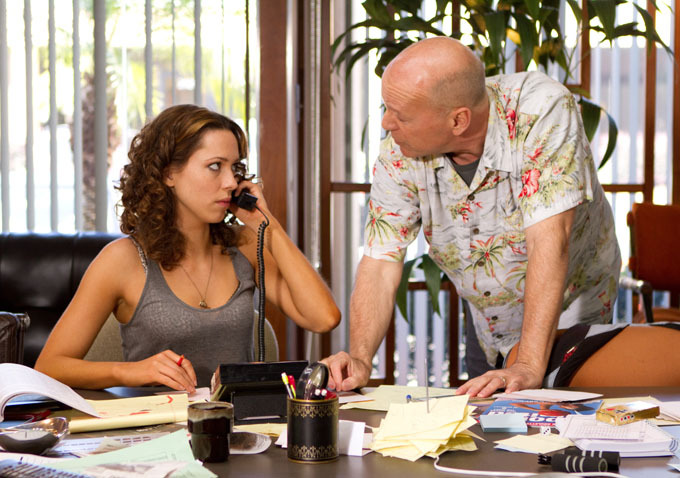 It seems as though Bruce Willis is on a bit of a rollercoaster this year. After debuting a side of him we rarely see in Wes Anderson‘s delightful Moonrise Kingdom, his dismal thriller The Cold Light of Day was quietly released into theaters, but just a few weeks later we got one of his best roles in years with Looper. Now this fall brings another one of his supposed duds with Lay the Favorite.

Coming from The Queen and High Fidelity director Stephen Frears, the cast of Rebecca Hall, Catherine Zeta Jones, Joshua Jackson and Vince Vaughn is appealing, but we had nothing but bad things to say about this betting drama at Sundance (full review). However, hot off the release date news, Weinsteins’ VOD off-shoot Radius-TWC have inconspicuously given us a theatrical look, following the UK trailer, and one can check it out below.

Beth Raymer is a beautiful girl with a big heart who leaves her dancing job at a Florida strip club to become a Las Vegas cocktail waitress. Not exactly an ideal career choice, but her borderline-ditzy personality doesn’t give her many options. In walks Dink, a professional sports bettor who sees through her bubbly exterior and offers her a job placing wagers all over town to gain an advantage over the casinos. Her surprisingly impeccable mind for numbers soon cements her status as Dink’s good-luck charm, until his gorgeous-but-frigid wife, Tulip, starts to get jealous. Faced with no other choice but to fire Beth, Dink’s luck runs out when she heads to New York to work for a smarmy bookie, a turn of events that lands her squarely on the wrong side of the law.