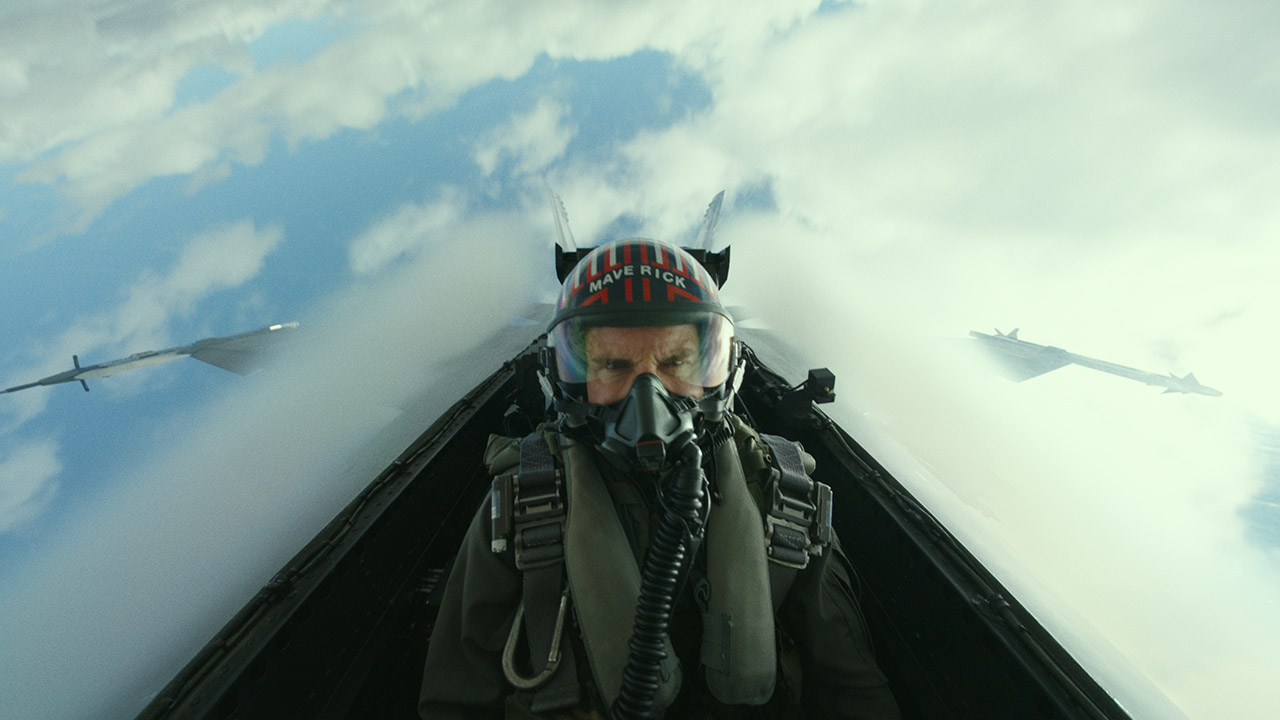 “He’s the fastest man alive.” Such is the kind of open self-awareness that is tastefully deployed throughout Top Gun: Maverick. Despite being the latest in a line of legacy sequels eager to capitalize on pandering nostalgia, Tom Cruise’s decades-in-waiting return to what made him a superstar only occasionally resorts to such bait. Thankfully, Cruise and director Joseph Kosinski are of a mind to make a film that ultimately exists on its own. Forced to contend with the pall of Reagan-era propaganda over the first Top Gun, this sequel has the gumption to take the original to task, while actively engaging with everything we know about its star. The film’s opening moments mirror that of its predecessor almost exactly. From the opening supers, to the music to the Tony Scott sunscapes, it’s just enough of a signal to let fans know they’re in a relatively safe space. But the fan service flourishes are dispensed up front, leaving plenty of runway to let the whole thing rip. Whether or not one is a fan of the first film, it can’t be overstated how impressive almost every creative decision in Maverick is. The action is practical, the propaganda is muted, and the cocksure hero has decidedly aged.

We catch up with our titular airman in the Mojave desert, spending his days as a test pilot for a high-speed experimental aircraft. On the brink of being permanently grounded, and after a white-knuckle flight sequence, Maverick is sent back to Top Gun in order to train a team of former graduates on mission that seems nothing short of suicide. Said mission suspiciously resembles Star Wars’ Death Star trench run (if it ain’t broke), but such a detail is rendered moot in the face of the groundwork it provides for the breakneck sequences that follow. The G-Force is palpable as Maverick (the film and the character) puts these pilots in some of the most anxiety-inducing aviation put to film. Alongside a solid showing from Miles Teller as Bradley “Rooster” Bradshaw, the excellent aviator ensemble is rounded out by an impeccably smarmy Glen “Hangman” Powell. More closely resembling the man Maverick used to be (and in some ways, still is), Powell is a sneaky standout with an undoubtedly bright future. But again, this is not your typical legacy sequel; no torches to be passed to a younger generation. The film is very much interested in its namesake: Maverick.

There’s a lived-in, meta quality to Cruise’s performance this time that’s not entirely unlike his most recent outing as Ethan Hunt. We’re shown a weathered movie star––a relic from an era when such a thing mattered to the ticket-buying masses. Reckoning with dwindling relevance and emotionally flailing beneath a devil-may-care exterior, every you’re-too-old barb thrown Maverick’s way is not so subtly meant for the near 60-year-old Cruise in tandem. The actor seems to take it all on as a dare; a full-tilt desire to prove everyone wrong. And somehow, as is his wont, he succeeds. Meanwhile, those hungering for the reemergence of Tom Cruise: Serious Actor (despite getting American Made in 2017), who cite Magnolia as their gold standard, may shrug Maverick off because of the IP sequel trappings. But make no mistake, IP sequel or not, he delivers the goods. To crib an adage from Mav himself: “It’s not the plane. It’s the pilot.” Cruise makes use of every faculty: manic intensity, physical presence, affable snark, vulnerability and––most shockingly––romantic charm. It’s all there, somehow bundled up into a single showcase that seeks to remind us why we minted him a movie star in the first place.

Amidst the skyward daredevilry is also a welcome surprise in Jennifer Connelly’s Penny Benjamin. The proprietor of the local Fightertown watering hole, keen fans might remember Penny briefly mentioned in Top Gun as a certain Admiral’s daughter from Maverick’s romantic past. Connelly gets exceptional mileage out of the role. Her chemistry with Cruise isn’t necessarily burning the screen up, but the two render a far more affecting romance than that of McGillis in ‘86. In the same fashion as Berlin’s “Take My Breath Away” all those years ago, the Hans Zimmer/Lady Gaga score works miracles here. Not for nothing, but there is a certain delight to be had in seeing Cruise take a crack at being a proper romantic lead again, and even better, against someone age-appropriate.

There’s much to be said about Cruise constantly staving off old age, but this particular turn as Pete Mitchell proves those efforts and criticisms to be skin deep at best. One of the greatest, oft-overlooked skills he has developed over his decade-spanning career is how to internalize the weight of time, a factor crucial to Top Gun: Maverick’s ethos. Anthony Edwards’ now iconic death from the first film is the underpinning for the entirety of this one, plaguing almost every corner of Maverick’s life as he reels from old mistakes and dreads making new ones. He may not quite look 60, but rest assured, Maverick is old.

That time and the distance it allows provides the film with a vital avenue to reckon with some of the more cringeworthy bits of its predecessor. While Top Gun frankly plays better when you realize the twentysomething Pete Mitchell is the chief antagonist, Top Gun: Maverick directly wrestles with the consequences. Maverick’s actions have left him cornered, both personally and professionally, to the extent that the cockpit is the only thing he has left. In perhaps the film’s most honest (and best) moment, a raw, teary-eyed Cruise professes, “It’s not what I am. It’s who I am.” It’s a loaded line, speaking as much to Mitchell’s career as Cruise’s, who may as well be delivering it directly to the audience. Cruise, taking up the banner for the adult blockbuster, is forced to stick the landing. Perhaps that’s because this is what he’s best at. Perhaps it’s because he’s out of options. Even so, perhaps he really is the only one who can.

That volatile, double-edged ambition is what fuels the entire enterprise. The go-for-broke attitude with which Top Gun: Maverick asserts itself is key to its success. Evident in the visceral whiplash of the aerial extravaganza, and the tender earnestness of its more honest moments, Top Gun: Maverick is the kind of rare, all-encompassing, and finely-tuned blockbuster that––if you let it––will take your breath away.