Together Review: Stephen Daldry Tackles Trauma in Real Time, For Better or Worse 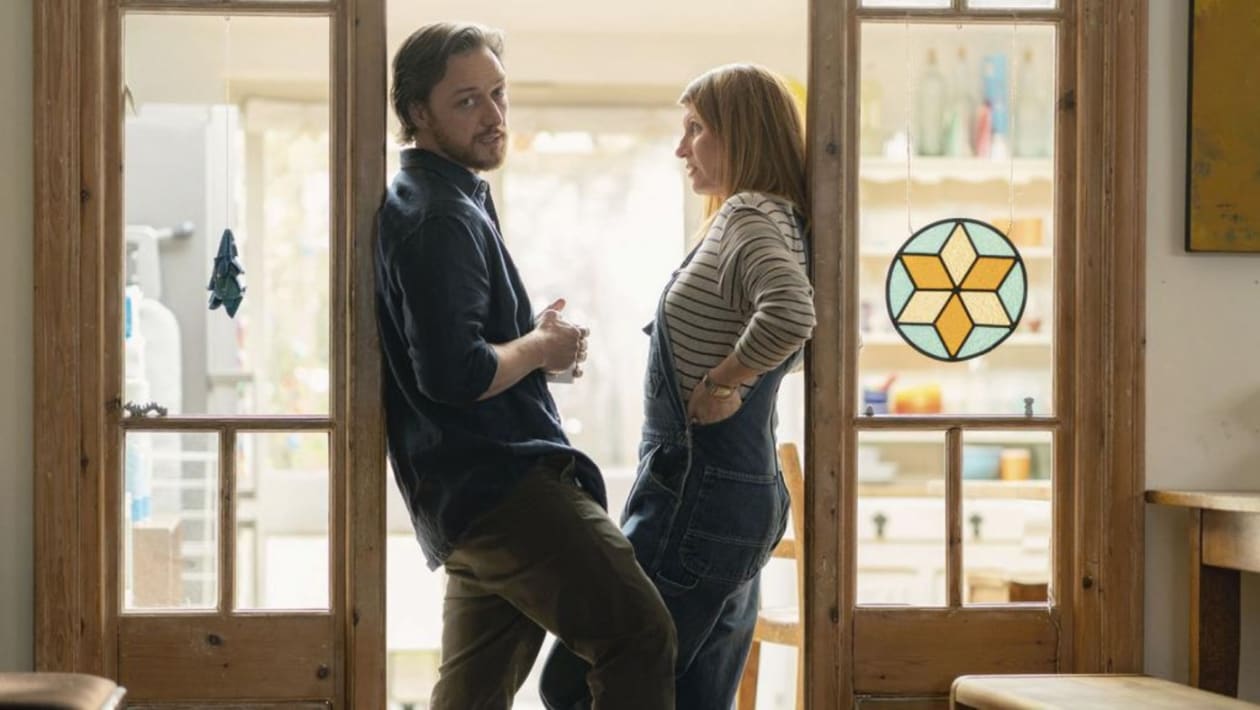 Right off the bat, let’s acknowledge something: making a movie about the COVID-19 pandemic during the COVID-19 pandemic feels like too much too fast. That said: art can be therapeutic, and one can hardly deny another’s need to confront the current state of affairs head-on as a means of survival. Together, written by Dennis Kelly and directed by Stephen Daldry, is raw and unpolished and a lot to digest. For some it may serve as a respite, a reflection of today that feels communal and embracing. For others it will be triggering and unwelcome.

At a scant 90 minutes, it follows a couple who openly hate each other. There is She (Sharon Horgan), He (James McAvoy), and their poor son Artie (Samuel Logan). Together they occupy a nice apartment in the United Kingdom. We open on the first day of lockdown, eighteen months ago. Masks have yet to be mandated and the death toll is disarmingly small.

McAvoy and Horgan address the camera directly throughout, explaining how and why they got here. He is a conservative, She is a liberal. He started his own successful business. She works for a non-profit. After a meet-cute involving a poisonous mushroom they found themselves pregnant and bound for life—clever-enough character descriptions and decisions that allow for a wide breadth of reflection and consideration about the past year-and-a-half. Daldry rarely cuts from our two leads, relying on their incredible presence. It’s a smart decision: their chemistry is cutting and a bit off-kilter, befitting the context of this relationship.

Each actor is given a show-stopping monologue to deliver. Both dig in deep, though Horgan’s moment is the what will be remembered. Unfortunately, Artie is used exclusively as a prop, a decision that actively contradicts the growth achieved by He and She throughout. One wonders if the film would’ve better served never showing Artie at all, given how limited his presence factors in.

McAvoy appears to age between the first scene and the last scene, an impressive bit of physical acting that acknowledges the difficulties of this past eighteen months with a subtlety the rest of Together lacks. As his character literally wears down he sympathizes with those he ridiculed earlier—frontline workers, refugees, etc. There is an acknowledgment of privilege that rings true, if a bit safe. Admittedly it’s hard not to recall the recent Doug Liman picture Locked Down, a cheekier take on similar themes.

Daldry has always been a warm, considerate filmmaker whose best work (e.g. The Hours) instills understanding of and empathy with every character onscreen; lesser work, such as The Reader, can ring muddled and overwrought. Here, thanks to Kelly’s brash mixture of sympathy and antipathy, Together never becomes cloying or saccharine.

The fourth-wall breaks grow a bit tiresome and its final scene fails to build on the intensity of what comes just before, but the leading turns and the topical setting prove memorable. How much you would like to be reminded of our current state of affairs is, of course, up to you alone.

Together opens in theaters on August 27.