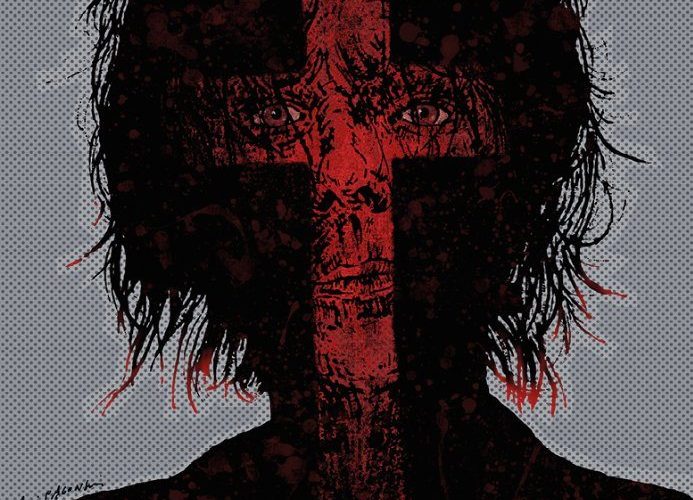 The roles have been reversed for Julia Brystygier (Maria Mamona), the once powerful colonel in the USSR’s Ministry. She interrogated countless enemies of the state, namely Catholics who rejected the communist concepts ruling them. The human body was her canvas, torture her paintbrush — nothing was out of bounds as far as acquiring the information she sought. But that was years ago. Now she’s a private citizen like the masses trying to survive. A lucky one too considering many of her superiors during that period are now in jail or dead for the crimes they committed. Julia’s prison is therefore self-imposed. Where confidence and control used to reside is now only fear, guilt, and regret. Her solitary hope for salvation becomes forgiveness from a God she doesn’t believe exists.

Ryszard Bugajski‘s Zacma: Blindness opens on an empty apartment, phone incessantly ringing to cut through the silence. Julia lifts the receiver and the caller hangs up. As soon as she puts it back in its cradle the rings re-commence. It’s a scene like many we have witnessed during Holocaust stories of hidden Jewish civilians waiting with blind hope that they’ll be forgotten. We therefore assume Julia is also a victim of harassment and abuse trying to get as far away from this hell as she can. She needs protection and perhaps the Primate of Poland (Marek Kalita‘s Cardinal Wyszynski) can provide it for her once she pleads her case. Despite being assured a meeting with the holy man by Sister Benedicta (Malgorzata Zajaczkowska), however, this face-to-face is indefinitely postponed. It’s the way in which it’s pushed to a later date that catalyzes our giving pause as far as what we’re watching. There’s a palpable hostility in the prayer room where she waits, both from Benedicta’s cold calm and Father Cieciorka’s (Janusz Gajos) direct questions that quickly transform a setting of worship into one of interrogation. The back and forth between this priest and Julia is invigorating in its bluntness — he shows no mercy and yet never once raises his voice. The reason she cannot cope is that she used to be the one asking these questions. No one had ever spoken to her this way, demanding identification and the admittance of deeds she may or may not have done. Being on the other end isn’t very pleasant.

But it still doesn’t break her defenses, at least not enough to walk away. Julia arrived for a reason and only the Primate can grant relief. She says she’s met him before and we once again assume it was during happier times as colleagues at a party or who knows what. The truth is much more sinister, her pleas a lot more one-sided than the mutually beneficial conversation expected. Is the church willfully making her sit in a small room to wait for an unknown duration of time before seeing her and asking more questions? Are they purposefully forcing her to experience the same circumstances she once oversaw? Whether intentional or not, the method does get under her skin and it becomes hard to discern reality from nightmare. This is Zacma: Blindness‘ greatest characteristic, its ability to seamlessly move from present-day to the past and back again without really knowing what is true. Is the caretaker (Slawomir Orzechowski) a spy for the secret police? Is Julia being tailed, bugged, and watched in case she will need to be dispatched? Who does she recognize and whom is she merely projecting old friends and victims onto as her mind fractures open in a desperate attempt at reconciliation? Bugajski utilizes repetition to great effect, the mirroring of interrogation tactics and reversal of positions expertly insuring we understand how precarious Julia’s grip on sanity is. She wants to be heard by God, to repent actions still not admitted to the courts, but God won’t listen because she doesn’t believe.

I’m not talking about belief in a higher power whether that presiding over her Judaist upbringing or He who rules over the Catholic sanctuary she now inhabits. She doesn’t believe she should be forgiven, not unless those she harmed are the ones providing it. So ingrained with an exterior of deflection and deceit, it’s easy for her to rattle off fake identities to escape capture by the police or ignore a priest’s request for honesty. Her natural inclination is to insulate herself from the monster she became, either under her own volition or possessed by a dybbuk as she’d like to think. The truth therefore only arrives in dream — waking or otherwise. A vision of a man she destroyed manifests to ensure she never forgets what she did. And boy did she do some heinous things to prisoners and family alike. She for all intents and purposes tortured her own soul until there was nothing left. Blind for so long to her destructive nature, she’s now blind to her avenue for redemption. The film starts using supernatural elements in nightmare and fast-paced debates on Earth pitting Julia opposite victims of her regime to discuss ideas of faith, spirituality, and sin. The initial confrontation between she and Father Cieciorka is wonderfully paced and felt; her eventual sit down with the Primate weightier in his stoicism and anger having to engage her by duty rather than desire. Moments of compassion enter as she helps blind children too, but those may simply be her mind’s fictional manifestations of penance.

In some respects Bugajski is giving his country a metaphorical catharsis — pitting religion against communism and letting the former prevail. He allows Mamona to humanize her character despite the label “Bloody Luna” because underneath the hate and violence is a potential member of the flock to be reawakened. We feel for her insecurities until learning they’re some karmic retribution. But even so we can’t sit back and enjoy two policemen overstepping their boundaries to assault her while a full bar fearfully watches. Two wrongs don’t make a right. Even if Julia deserves death, you can’t deny the punishment her guilt’s sudden usurpation of her faculties lends. Perhaps her remorse is real. Perhaps she deserves to be saved if only because forgiving her is more victorious than becoming her.