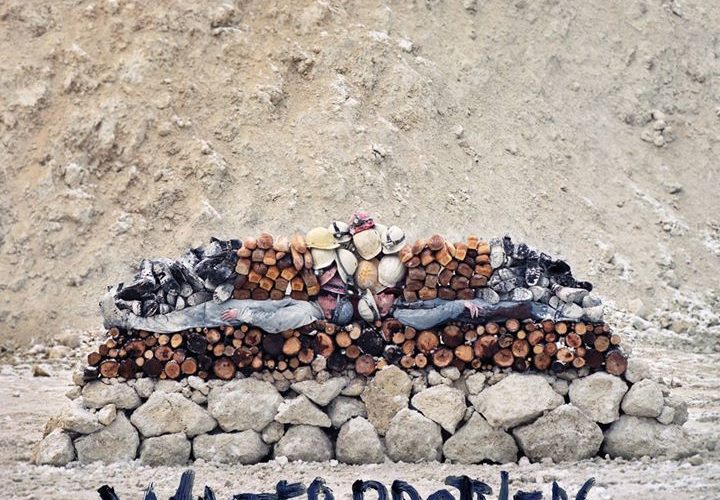 It opens in darkness — the beams from headlamp flashlights and sparks of metal on rock our only points of illumination. This is the oppressive environment holding the over-worked and under-paid miners while their boss sits in his factory office without a care as to who the men in his employ are besides a social security number. They let off steam with a bottle of homebrew alcohol to cut the monotony of their daily routines before returning to their respective trailers back in town that barely deserve the label shelter. It’s a futile existence that simply churns along with little in the way of excitement besides the possibility of a cave-in risking each of their lives. So when someone falls ill and the system is altered, everyone takes notice.

Writer/director Hlynur Palmason puts us in this dark and aggressive locale to ensure we know these men to be hard-workers with little time for nonsense. In fact, the only nonsense they will tolerate is that delivered by Emil (Elliott Crosset Hove) because he’s the supplier of their moonshine. If he wants to be a weirdo copying his brother (Simon Sears’ Johan) in an ever-escalating series of actions to teach us that he doesn’t have a limit for “too far” rather than do his own work, so be it. If he wants to play amateur magician with the liquor he’s promised they could all sip from before heading back to the surface, let him. For a few bucks (or trade), this clown helps them drown their sorrows. He’s protected. But is he liked? This may seem inconsequential considering no one is universally adored, but it proves pretty relevant once that co-worker (Michael Brostrup’s Michael) is hospitalized. Rumors start to swirl that Emil’s concoction is to blame — the same swill they’ve poured down their throats for years. Suddenly Daniel (Peter Plaugborg) refuses to give him a ride to the factory, the guys in the mine say they aren’t interested in his latest batch, and his boss Carl (Lars Mikkelsen) calls him to his office without warning. The fool becomes pariah, but with good reason. These men have enough to worry about without the threat of his poison. Even so, however, they aren’t without fault reaping the benefits of his antics for so long. Without demand, supply is worthless.

Palmason’s Winter Brothers shows this fallout with as much ambiguity and lack of strict contextual basis as his opening scene. He lets his visuals provide whatever explanations are necessary and therefore leaves it to the viewer to catch details themselves. If not for a sequence depicting Emil’s theft of factory chemicals, we wouldn’t know the alcohol was his let alone distilled by him. Until Anna (Victoria Carmen Sonne) — the sole woman in this industrial wasteland — yells Emil’s name, we don’t know she’s aware of him at all. And from there it’s through a prolonged wrestling match driven by extreme emotion that we understand whether they are a couple or not. Everything is unknown until the journey makes it so. The resulting uncertainty only adds to Emil’s unpredictability. He’s ultimately being attacked for what he’s done despite it being no different than what he’s always done without incident. He’s being pushed aside as an outcast that even his brother starts to become frustrated with. And all the while he has a rifle that he’s been practicing with in his home thanks to a military training video an old pilferer traded him for booze. We watch Emil gradually reaching a breaking point and wonder just how violent the snap will prove. No one could be mistaken for thinking horrible thoughts since his very identity is being torn away. Without a job (the factory) or a skill (the moonshine), what is he besides a waste of space within a world that cannot tolerate inefficiency?

There’s a dream-like quality to Palmason’s vision that often devolves into nightmare with red caution lights saturating the screen or salt slurry refuse caked onto everyone’s faces as though they are decomposing before our eyes. We receive a couple fantasy sequences too as the notions of worthlessness and duty collide in Emil’s subconscious as far as what he can do to earn forgiveness or simply survive the precarious situation he has walked himself into. But while there is a level of personal responsibility with anyone who winds up in the hospital from drinking his alcohol, he’s the one to which it traces back. He stole the supplies. He cooked it. And he profited from it. Whether he feels guilty or believes he deserves any punishment is inconsequential. Beyond this sense of self-aware ego, however, is that of the others within this tightly wound and volatile work community. Where’s the line that they must decide to cross? What right do they have to retribution whether the refusal of a ride or a rock to the head? Just as a story Daniel tells about a man and his dog, definitions and interpretations vary. It’s easy to ignore complexity and seek a pound of flesh to satisfy an urge steeped in rage. But what good comes of it? Those who Emil’s wares risked must decide whether they can still treat him as an equal and in turn whether they should take action against him. And Emil must look to protect himself from the possibility of attack.

The events may seem harmless outside of this unfortunate accident, but a psychological war breaks out regardless. Palmason isn’t interested in painting it more overtly than a speech by the general on Emil’s rifle VHS, but he injects enough dread and suspense inherent to it to ensure we acknowledge its presence. The creation of this us versus them scenario is an instantaneous one. As soon as rumors swirl, Emil must begin to tread softly. As soon as the first random act of aggression hits, he must prepare himself for more. And as conditions in the mine worsen so too do those at home. Emil begins to lash out as a means of self-preservation until even the relationships we couldn’t fathom breaking do. You cannot outrun your own consequences.

Winter Brothers screened at the Toronto International Film Festival and opens on June 29.