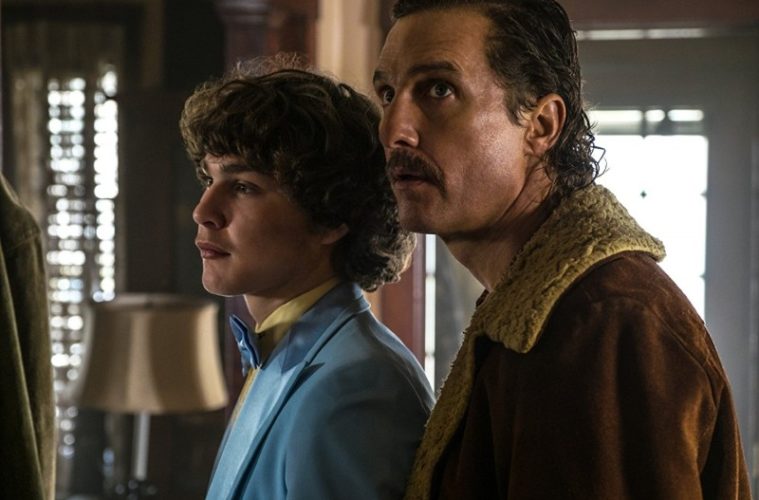 TIFF Review: ‘White Boy Rick’ Cuts Through the Bullshit of the American Dream

The pitch is as follows: Ricky Wershe Jr. (newcomer Richie Merritt) was a street hustler, drug kingpin, and FBI informant by the age of seventeen. If that doesn’t hook you, the added bonus of it all being real should. Welcome to White Boy Rick, a look at the American Dream that cuts through the bullshit to show what the term truly means outside of false promises. Ricky isn’t some hotshot who worked through the ranks and got too close to the sun. The order of those labels in the trailer isn’t even correct, a difference with dire consequences. He was simply the kid of a shady gun reseller (Matthew McConaughey’s Rick Sr.) whose best friend (RJ Cyler’s Boo) had family in the game. He was a product of his circumstances with a mind, ambition, and heart to break free.

Just as the marketing materials fudge the timeline for additional drama, they also sell a boisterously good time with synth beats and quick cuts of excess and extremes. I’ll warn you now that Yann Demange’s film is much heavier than such appearances predict. Screenwriters Andy Weiss, Logan Miller, and Noah Miller aren’t about to sacrifice the emotional stakes of what went down for superfluous flash since the life Ricky seeks to escape is not one that should ever be described as “fun.” If anything his experiences are an education in the school of hard knocks with lessons in racial prejudice, misplaced trust in authority, and a dog eat dog mentality that keeps every facet of this country in a stranglehold from the highest highs to the lowest lows.

That doesn’t mean it’s not also funny, though. These are white trash folk who are easy to be underestimated. So they can scam a scammer at the gun show with obvious relish one second and cause a public disturbance the next by chasing off Ricky’s sister’s (Bel Powley’s Dawn) boyfriend in order to take a family trip down to the ice cream shop for frozen custard. We laugh at the absurdity of these juxtapositions and the carefree attitudes of young boys who believe they are invincible. We laugh because they’re laughing, the atmosphere in Johnny Curry’s (Jonathan Majors) crew being one of glamour and wealth. Ricky isn’t some token mascot to mock, though. He’s one of them. And hanging with Boo provides an introduction to all the key players.

This is just one part of his identity, though. He’s still a Wershe and he loves his family to fault. That doesn’t mean he won’t let them down time to time, only that he won’t let them go down without a fight. So he plays every side he can, skipping school to hang with the Currys in hopes of securing a future while also letting a few cops (Jennifer Jason Leigh and Rory Cochrane’s FBI agents with Brian Tyree Henry’s narcotics officer) use and abuse him under the auspices that they’ll throw his dad in jail otherwise. Each step forward is therefore a step closer to independence if not death, so he makes sure to be in the background watching and gleaning the know-how to pick up the pieces of what could very quickly become a broken empire. Why not fill that void? Why not try for more than they have?

Rick Sr.’s answer would be talk about a pipe dream he’s been deluding himself with for years. This is a man who abused his wife and children—a no good weasel who justifies his actions as those based upon protecting what’s his. He’s no role model and yet he does have important things to say. Maybe his kids being older has allowed him the opportunity to reflect on his mistakes and try to make them right or maybe he’s just a coward too afraid of the big score because of the risk involved. It’s a sense of caution his son does not possess and one that ultimately makes him subordinate to the teenager once Ricky decides to take the bull by the horns. Survival and false hope might be enough for the old man, but Ricky’s dreams reach further.

As such, the danger escalates beyond his control. While Rick is experienced enough to manage the feds and stay just right of legality, Ricky’s impulsiveness puts him in the crosshairs of every feasible adversary. Drugs are Curry’s business and thus his too. That volatility leaves very little wiggle room for forgiveness and trust, so one false step could mean a bullet to the head. And as someone who didn’t know the end of this so-called legend’s story, those possibilities hold visible weight. It could earn a friend pointing a gun or a little dude hurling insults at his front door uninvited—despair or hilarity. That uncertainty is what keeps us glued to the screen because things do start moving too fast for either Wershe to control. While neither would have done anything different, they’re tortured by their choices nonetheless.

It’s wild to think that Merritt has never acted before because he commands our attention with a mix of charismatic comedy and a sobering display of optimism in the face of annihilation. He’s playing off an Oscar winner and holding his own from start to finish with an authenticity that outweighs any minor stumbles. As for McConaughey: I was surprised to find how much he has to do here. My assumption was that he’d be on the periphery to offer advice or be a mirror with which to avoid copying and yet he proves an integral part of the whole with more than one scene worthy of awards notice. It’s one thing to play this role as a caricature, but another to damn him for his failings while also allowing empathy for his transformation from Y-chromosome to parent.

This is crucial to White Boy Rick‘s message. It’s about family, love, and redemption. Loyalty only goes so far on the streets when rumors could mean death so we can’t necessarily blame Curry for actions taken with security in mind. He openly explains how Ricky being in his crew doesn’t place the same target on his white back with nuance—these types of complex issues never devalued for a joke. The laughter disarms and deflects instead. It gives these characters an identity that endears them despite their propensity for crime. Yes they help many innocent people get killed by association, but they were also exploited and disposed of without a second thought by forces for good. At some point the system must be held accountable with the same intensity as those criminals it creates.