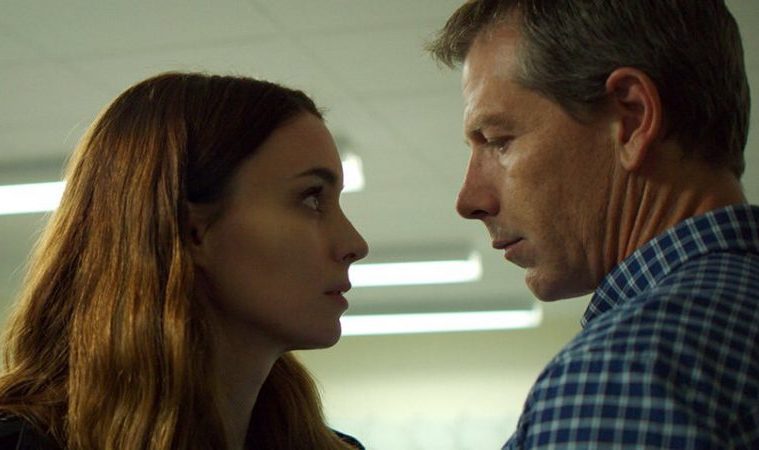 “It’s a long story.” So says Una, a young woman with a going-nowhere office job and an emotionally devastated past, when asked about her relationship with Peter — the man she knew as Ray. Indeed it is a long story — a morally complex and cruelly realistic one, too. The debut feature from theater veteran Benedict Andrews, Una is an astonishing success. Anchored by two exhilarating performances from Rooney Mara and Ben Mendelsohn, the film is also harsh, moving, and extraordinarily riveting, one of the more unsettling works to play the 2016 Toronto International Film Festival and undoubtedly among the most provocative.

Una is based on David Harrower’s play Blackbird, an acclaimed drama that has starred such acting heavyweights as Jeff Daniels and Michelle Williams. Yet the roles of Una and Peter / Ray now seem owned by Mara and Mendelsohn. The storyline — a woman in her twenties confronts the man who sexually abused her as a thirteen-year-old — calls for actors with an ability to verbally joust for ninety minutes and capture the complexities of sexual abuse. It’s hard to think of two performers better suited to such a task. Mara gives her finest performance to date — a statement that might seem hyperbolic given her stunning work in Carol and The Girl With the Dragon Tattoo, but Una requires even more emotional stamina.

Throughout the film, scenes of present-day Una alternate with those of her younger self (Ruby Stokes), and the experience that forever altered her life. For three months, she had a relationship with her family’s next-door neighbor, Ray. As the film unfolds, we watch how it developed, first with comments at a barbecue, then at the local pool, and, finally, with a poorly conceived plan to run off together. Una and Ray ultimately ended up in a small-town motel, a moment to which Andrews continually returns. These scenes are marvelously constructed, chillingly detailed, and wonderfully acted by Mendelsohn — charming yet predatory — and Stokes.

Still, it is Rooney Mara’s Una who burns into our memory banks. She has a dull office job, a complicated social life (seen with a solitary bit of clubbing and a random sexual encounter in a bathroom stall), and an uneasy relationship with her mother. Una still lives at home, with the former residence of Ray a daily sight. It is unsurprising, then, that she has a desire to confront him fifteen years after their encounter and his conviction. He is now a married factory boss going by the name of Peter, and his facial features visibly sink when the now-adult Una appears at his workplace. No introduction is necessary; even fifteen years later, “Peter” knows who stands before him.

What follows is an extended, occasionally interrupted conversation set amongst a busy factory. It’s a brilliantly conceived setting, a cavernous space occupied by seemingly endless rows of metal and cardboard, fluorescent lights, and drab break rooms. The visual dullness is a winking, unexpected touch; even when a combative employee meeting takes place in which Peter must discuss that dreaded word, “consolidation,” the emotion seems held back, restrained. The scenes between Una and Ray, however, have the force of a cannon blast. Una has not traveled to see Ray for public embarrassment or shaming. She has real unanswered questions, and a piercing desire to know what followed their relationship. On her end, that meant status as a social pariah and familial pain that led her father to an early grave.

For Ray? His second act involved a new name and a new life, and the significance of these changes becomes apparent. Running through Una is a sense of somber reflection and an innate understanding of the track marks left by abuse. Ultimately, this is why the performances are so unforgettable. The film culminates with a uniquely powerful, darkly humorous party scene, yet there is no clear resolution or tidy conclusion. Nor should there be. It’s hard not to desire one more emotional beat, perhaps an additional moment of confrontation. But in Harrower’s play (he also wrote the screenplay), simple catharsis is impossible.

There are real surprises in this story, and that’s especially important given the script’s occasional lapses into overly familiar territory. Andrews shows a remarkable eye for detail and setting in this, his first feature, but, more than anything, he knows exactly how best to let Mara and Mendelsohn rip. Stokes and rising star Riz Ahmed, playing a factory worker whose role takes on added importance in the film’s final stretch, also make an impression. But Una belongs to its leads. With Star Wars: Rogue One on the way, Mendelsohn is likely on the verge of major stardom. The work seen here is his finest since the great Mississippi Grind, alternately likable and detestable. And for Rooney Mara, it’s a new high, giving a performance that can only be described as extraordinary, and she makes Una a sharp, discomforting stunner.

Una played at the Toronto International Film Festival and opens on October 6, 2017.