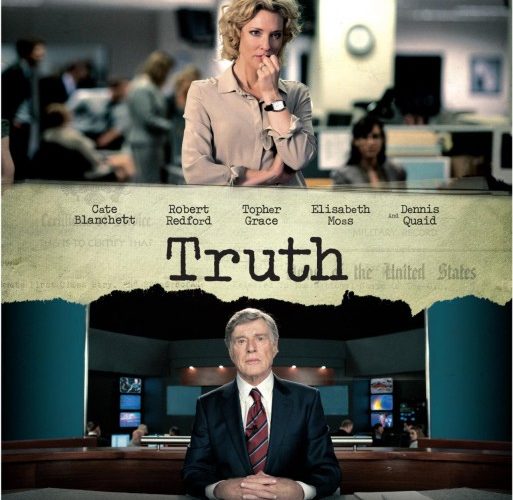 There’s a real issue with the media and how they have monetized news content over the past couple decades. Robert Redford has a great monologue as Dan Rather in James Vanderbilt‘s Truth speaking on the subject of “being there” when the switch was flipped. The film’s unsurprisingly very much interested in exposing this fact—despite our already being keenly aware of it and a majority of Americans preferring the sensationalism bred in the aftermath to actual investigative journalism—in the background of an exposé detailing Rather and more prominently Mary Mapes’ (Cate Blanchett) 60 Minutes story about George W. Bush being AWOL from the National Guard for a year.

Unfortunately, just as Vanderbilt seeks to show how politically unbiased Mapes and her crack team were in uncovering what looks to be truth, neither he nor she—whose memoir the film is based upon—are. With a soaring score and lingering shots doing everything but placing an angelic aura around the frame’s subject, Truth is less about finding truth or explaining how fluid the search for it is than to vindicate and bestow sainthood atop these “heroes” who refused to kowtow to interference from CBS’s parent company Viacom as well as the government. Their characters scream about ethics and fairness, yet the filmmakers themselves clearly set-up a very specific good versus evil dynamic to lean their plot upon.

I thought it was weird how Mapes’ boss Josh (David Lyons) sounded patronizingly opportunistic when listening to her story pitches. He was orgasmic when she shared this juicy tease on Bush found via a tabloid journalist’s unvetted source. Vanderbilt wants us to question Col. Bill Burkett’s (Stacy Keach) motives in that role from the start because he needs him to be the fall guy just as CBS brass hoped to accomplish once their blame game commenced. The interesting thing, though, is that all responsibility should fall solely on Mapes’ shoulders for being the person who spearheaded the story—one we hear countless times was a passionate four years in the making. Did the consequences fit the crime? No, and the industry has no one to blame but itself.

Mapes and Rather were celebrity martyrs accompanied by Col. Roger Charles (Dennis Quaid), Lucy Scott (Elisabeth Moss), and Mike Smith (Topher Grace) once the dust settled. There’s a story to it that the American public should be made aware, one that exposes an unsettling level of corruption and favoritism within a vocation that collapses under the weight of both. This could have been that story if it were told from an outsider’s perspective and not the woman who was ruined by it. Letting Mapes’ voice lead us through this tragedy of integrity is to allow personal bias; making it a fictional narrative with an obvious inclination towards one party’s purity and another’s deep pockets rather than documentary taints its validity. That itself isn’t a bad thing except for the fact Vanderbilt uses his cinematic tools to manipulate us into forgetting the real point. It’s ironic because Blanchett’s Mapes is so concerned with making everyone realize the authenticity of a few documents has no bearing whatsoever on the full breadth of what they exposed and yet the film creates a similar smokescreen. It pretends to tell us the intriguing web of lies, backtracking, and hubris that went into this journalistic nightmare, but ultimately conjures a battle cry against the Bush family and Republicans in general instead, with multiple monologues about their wrongdoing pointed at us rather than the characters receiving them.

It’s a shame because the plot is captivating. I thought the first half watching Mapes and her team collect evidence, corroborate it, take liberties with verification, and accept an impossible deadline for the sake of ratings was worthwhile. And when that first blogger arrives to expose certain documents as fake, I dug in for the fight. Blanchett delivers a stunning performance as the underdog in the right—because I do agree there was enough for her to run the story and that the media’s desire to stir trouble and make news out of one detail to rile the public was to blame for the fallout. The character has a lot of baggage to infer on her motivations and Blanchett is up to the emotions it conjures.

But Mapes’ family history isn’t included to clarify her strength; it’s there to bolster her position as the victim. Her tragic childhood and menacingly abusive father births such hatred that the filmmakers hope a little symmetry with CBS and Bush’s administration through mirrored verbiage will align one to the other. It’s handled so poorly, though, that I found myself unable to take anything Vanderbilt shared at face value. Suddenly everything had an ulterior motive for drama or conflict as the whole mission to portray an industry in turmoil dissolves into hopeful vindication for Mapes and a legend in Rather whose reputation was forever tainted by the incident. Maybe his role written as “innocent bystander” was merely Mapes doing her friend a favor.

The only saving grace is Blanchett’s performance, even if it forces her to compromise the character’s headstrong demeanor for heartstring tugs when the going gets tough and emotional flashbacks to Daddy can add extra gravitas. Grace is entertaining despite being a clichéd, agitating mouthpiece of rhetoric, Moss is good as our surrogate somewhat learning the story along with us, and Quaid shows how good he can be in the right role for his gregarious smile. Redford dons a hairpiece, but thankfully never tries to mimic Rather. His character is just a stand-in anyway—there to be vindicated, revered, and sainted as protector of truth. It’s a shame then that I found myself questioning his legacy more after the film than before sitting down.

Truth premiered at TIFF and opens on October 16th.